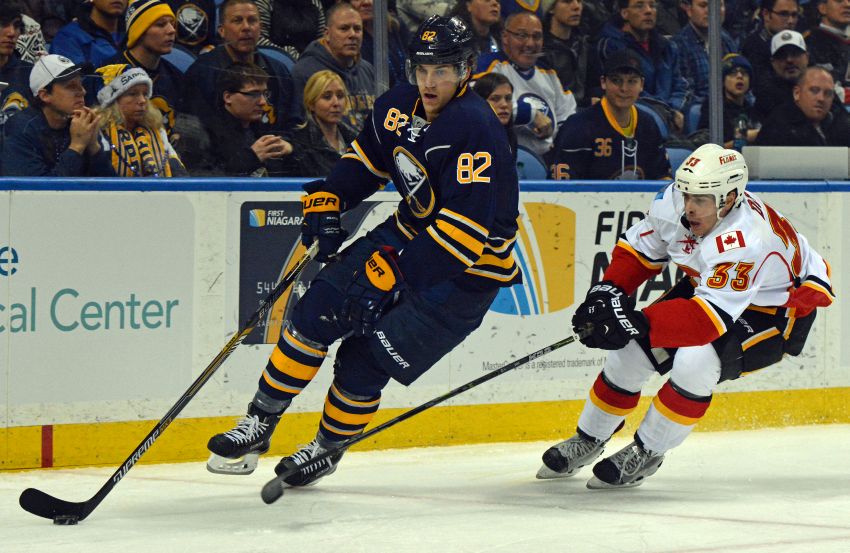 The Buffalo Sabres are down 10 players to injuries and illness after losing center Marcus Foligno and captain Brian Gionta in Sunday’s 4-3 overtime loss in Boston.

Foligno apparently hurt his hand fighting the Bruins’ Matt Bartkowski after the defenseman leveled Gionta high during the first period. An upper-body injury will sideline Foligno for “a while,” Sabres coach Ted Nolan told reporters in Boston.

“One of those freak accidents that happen when you play,” Nolan said. “You’re throwing punches at helmets, so your hands are out there.”

Bartkowski’s hit flipped Gionta, who landed on his face.

“Still a little shaken up,” Nolan said about Gionta. “We don’t know if he’s going to be in (Tuesday) or not.”

“We’ll let the league look at that and make the correct call,” he said.

The Sabres could have to recall more players prior to Tuesday’s game in Detroit, their final contest before a four-day Christmas break. They recalled center Tim Schaller and defenseman Mark Pysyk from Rochester before Sunday’s game.

“It looks the flu bug is running through the team right now,” Nolan said.

There is some good news, however. Nolan said Weber will likely play Tuesday. Kaleta, McCormick and Moulson could also return, he said.

If the Sabres make a recall, winger Joel Armia, the 16th pick in 2011, would be a prime candidate, Nolan said. Armia likely would have been summoned for the first time over the weekend if he had been playing regularly. The Finn just returned from an upper-body injury, and the Sabres didn’t want him to play three straight days.

“He’s playing quite well down there,” Nolan said. “Coming back from the injury that he had, we kind of thought it would be unfair for three in three for him.

Nolan said the Sabres would skip practice today and have a “quarantine day.”