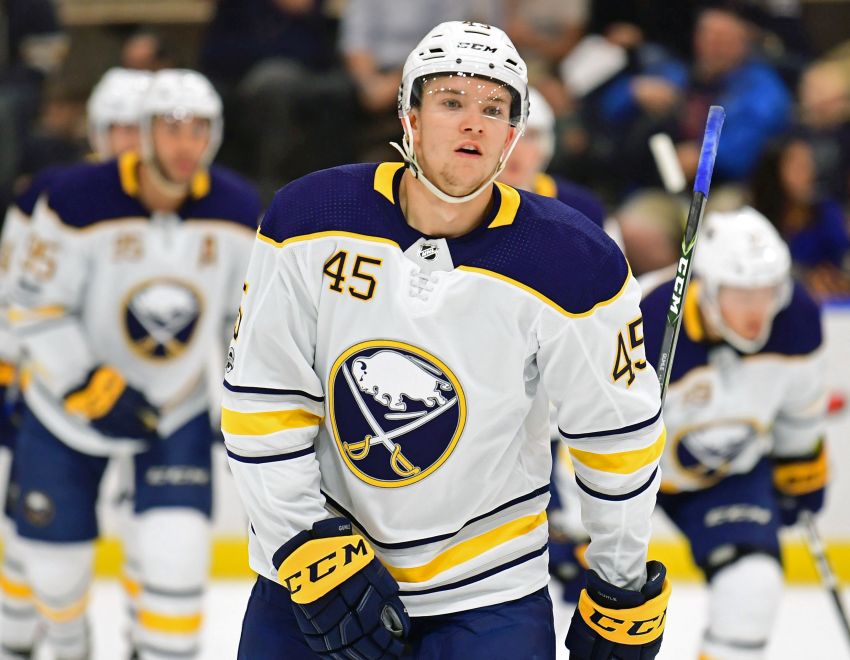 BUFFALO – Earlier this season, as injuries decimated the blue line and the Sabres kept rookie Brendan Guhle in Rochester, the plan for their top defense prospect became evident.

The Sabres wanted Guhle to pay his dues, quietly develop in the AHL and eventually earn a recall.

“We were going through a tough stretch there, where you think about bringing guys up, we had some capable defensemen back there,” coach Phil Housley said Monday after the Sabres recalled Guhle. “We were giving them an opportunity to see what they can bring to our team.”

Through 42 games, the Sabres have used a whopping 11 defensemen. Only two – Jake McCabe and Marco Scandella – have remained healthy all season.

So for months, instead of summoning Guhle, 20, the Sabres utilized journeymen depth defensemen. Matt Tennyson, for example, played big minutes in October. For a few games in mid-November, Justin Falk skated on the No. 1 pair.

“They were winning hockey games (in Rochester), so it was a great chance for him to get some games, develop, bring his game to another level,” Housley said.

But the reeling Sabres, who have a four-game losing streak (0-3-1) and an NHL-low 10 wins, desperately need a spark.

The slick Guhle, a 2015 second-round pick, has acclimated to pro hockey quickly, compiling seven goals and 20 points in 35 AHL games as a rookie with the upstart Americans. He also has pumped a team-high 91 shots on goal.

“They said I earned the recall,” Guhle said after the Sabres prepared for Tueday’s home tilt against the Winnipeg Jets, their first game at KeyBank Center since Dec. 22.

McCabe said: “When you’re winning and you’ve got confidence, you’re having fun out there, you’re just out there playing. I think that’s kind of what they wanted from (Guhle) the first few months of the year.”

Guhle’s puck-moving skills and offensive abilities should help the Sabres, whose defense has scored six goals all season. He scored a nifty overtime winner Friday, grabbing a loose puck inside the opposing blue line before roaring in.

“Just give him an opportunity, he’s playing some terrific hockey down in Rochester,” Housley said of why the Sabres recalled Guhle now. “It’s just a good time before we hit the break. We can maybe utilize him in a game.”

The Sabres also host Columbus on Thursday before beginning a four-day bye week. Guhle, who practiced beside McCabe, will almost certainly play Tuesday.

“It’s just a good opportunity to see what he can bring to practice,” he said. “I really like his mobility, obviously. But I like the stick detail that he has defensively and what he does from (around) our goalie, working out, you look at him, he’s joining the rush and making things happen back there.”

While Guhle’s promotion is special, he mentioned twice he was thinking about his Rochester teammates. The 22-8-3-3 Amerks have quickly grown close in three months.

“We’ve got a great group of guys down there and they’re all awesome teammates,” said Guhle, who played three NHL games last season during a recall from junior. “I’m thinking about them today and hopefully they’re having a great practice. Coming to the rink every day is fun.”

For the first time since the early 2000s, Rochester might be a legitimate Calder Cup contender. Besides talent, Guhle believes the Amerks’ leadership group – they brought back former captain Kevin Porter and ex-Sabres defenseman Nathan Paetsch – makes the team special.

“Everyone’s included, no one’s got to try to put on a face, everyone can be themselves,” Guhle said. “Just a great group of guys.”

He added: “I’ve only known them a few months. It feels like longer, I know them so well, great buddies.”

One of Guhle’s buddies, goalie Linus Ullmark, accompanied him to Buffalo. The Sabres also recalled the AHL All-Star because starter Robin Lehner had a maintenance day and is day-to-day, Housley said.

To Ullmark, 24, who played for two bad Amerks teams, this season has been “terrific.”

“This year we’ve been on fire,” he said. “The boys have been playing out of their minds, a great group of guys. It’s a lot of fun going to practice every day and coming to the rink. Most of that is because of what kind of personnel we got in the team and the management.”