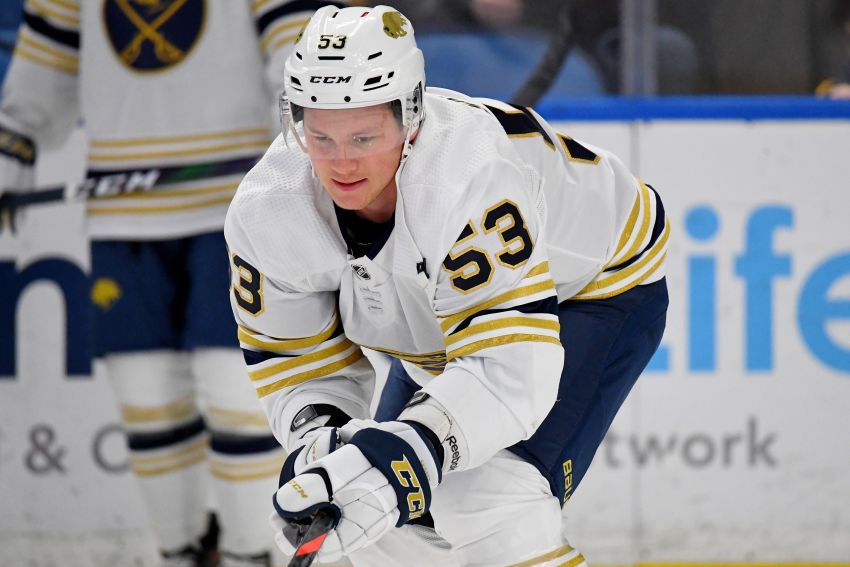 Jeff Skinner has gotten off to a strong start. ©2019, Micheline Veluvolu

When Krueger broke up the lethal duo before the season, it felt like only a temporary move. How long could he really keep them apart, right?

Skinner, an aggressive presence who loves hounding the puck, has adapted to each one.

“As you get older you have more experience, you can draw on that experience to sort of adjust your play to different guys’ styles,” Skinner said following Tuesday’s practice inside KeyBank Center. “I think Jack and (Johan) or Marcus, they like to have the puck, and for me as a winger, they’re really good with the puck on their stick.”

Has playing away from Eichel hurt Skinner’s production?

Skinner, who signed an eight-year, $72 million contract in June, has scored all 11 of his goals this season at even strength, the NHL’s fourth-highest number entering Tuesday’s games. Over an 82-game campaign, that’s a 32-goal pace.

In his first 28 outings last season, his first here, Skinner scored 20 goals, including 17 at even strength.

But few expected Skinner, who scored at a 50-goal pace into February, would replicate his career season.

In his eight full NHL seasons, Skinner has averaged 29 goals. So this campaign is in line with his normal production.

“When he gets space and time, he’s lethal,” Krueger said. “When he has different players playing with him, he’s going to get different looks out of that.”

Krueger, who was hired in May, often says he can’t worry about last season, something he repeated Tuesday. He likes balancing lines and putting a defensive presence on each one. He also points out Eichel and Skinner usually play together on the power play.

Still, Krueger’s decision to move up Larsson, who registered only eight assists in 73 games last season, certainly raised some eyebrows. He had one assist before setting up Skinner’s goal Friday.

Why put arguably your purest goal scorer beside a fourth-line checker?

So far, however, the line – Conor Sheary is the other winger – has played well in three games together, especially in the first period of Monday’s 7-1 annihilation of the New Jersey Devils.

In a span of about 11 minutes, Larsson recorded three assists, his first three-point night since March 11, 2015.

“He’s easy to read,” Skinner said of Larsson. “He wins a lot of his battles. In that sense, I think you can kind of anticipate sometimes what he’s going to do with the puck, because I think sometimes when he’s in a battle, you’re pretty sure he’s going to win it, then you can start to think about what you’re going to do next.

“I think he’s done a great job lately of winning battles, being strong down the middle and then again, making plays.”

Larsson has mostly been cast in a checking role for years. The last time he regularly pivoted a scoring line, the end of 2014-15, the second tank season, he produced 14 points over a 19-game stretch.

Sheary, 27, said the linemates have “been connected all over the ice.”

“One guy’s in on the forecheck, the other guy’s right there,” he said, “and I think we’re just reading off each other pretty well.”