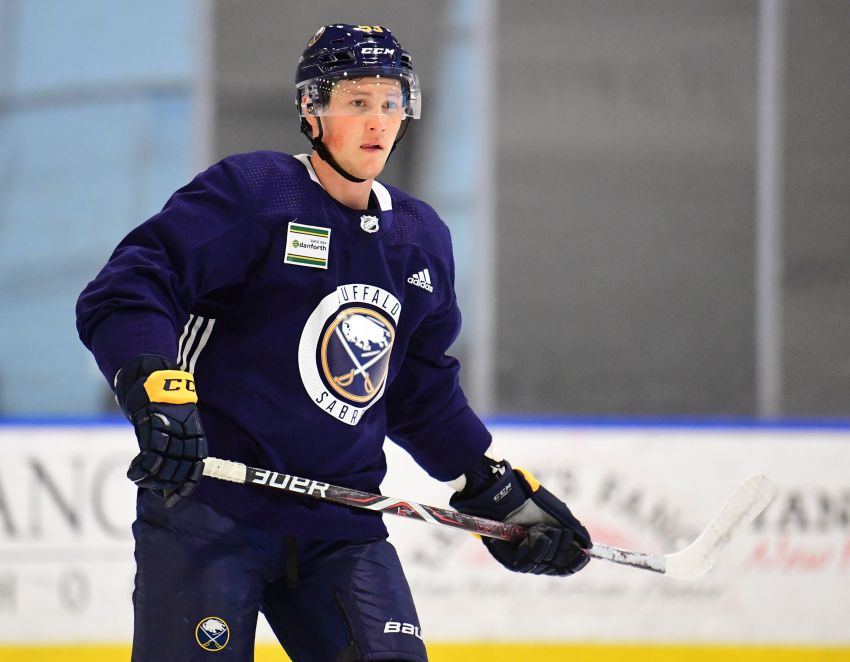 Jeff Skinner will be 34 when his contract ends. ©2019, Hickling Images

Jason Botterill sensed he would be asked a question about 40-goal scorer Jeff Skinner’s new long-term contract, so the Buffalo Sabres general manager decided to answer it himself.

“Probably one of the next questions is going to be about giving an eight-year contract to a 27-year-old,” Botterill said of Skinner’s $72 million deal on a conference call Saturday, a day after awarding the hefty contract. “But there’s always going to be risk sometimes in doing that. But we feel very comfortable in how Jeff handles himself off the ice, how he’s dedicated to conditioning and training.”

Skinner, who enjoyed a career season in 2018-19, should have at least a few prime years left. Given his dedication to conditioning, perhaps he can remain a lethal goal-scoring threat well into his 30s.

To Botterill, the rewards of the lengthy contract outweigh the risks. In addition to the scoring prowess Skinner showcased – he was producing at a 50-goal pace into mid-February – Botterill watched him quickly mesh with his new teammates.

“The other element that gave us comfort in going to a deal like this with Jeff is how he fit in with our group,” said Botterill, who acquired Skinner from the Carolina Hurricanes on Aug. 2. “I thought he was a great influence on our young players.”

Skinner, according to Botterill, went “out of his way to have an impact” on rookies Rasmus Dahlin and Casey Mittelstadt.

“We want to add to our group and not have to go out there and try to replace what Jeff Skinner can bring,” Botterill said.

Of course, Skinner’s salary cap hit – the contract carries an average annual value of $9 million – could influence what the Sabres can bring in down the road.

In just a year or two, the Sabres will almost certainly have to sign Dahlin, perhaps the NHL’s best young defenseman, to a massive long-term contract.

Right now, the Sabres have two players – Skinner and Eichel, who has an eight-year, $80 million deal – eating up 22.9 percent ($19 million) of the $88.3 million cap, according to capfriendly.com.

Still, Botterill sees potential cap-related problems as a sign of a strong roster. He developed in Pittsburgh’s front office, where he and his bosses maneuvered and built Stanley Cup-winning teams around the top-heavy contracts of Penguins superstars Sidney Crosby and Evgeni Malkin.

“People talk about some teams throughout the league having cap situations,” Botterill said. “Well, they have cap situations because they have excellent players on their roster. That’s what we’re trying to get to.”

“This (Skinner) contract just goes to show you when very good players want to stay here in Buffalo and be a part of it, we’re going to find a way to get it done,” Botterill said. “Our goal is to continue to try to develop within our system and we want to give them big contracts. We want them to develop and be players that are deserving of very big contracts.

“I feel very comfortable having some of our top players taking pieces of our salary cap up.”

While the money is nice, Botterill believes Skinner, who has never played an NHL playoff game in nine seasons, also bought into the Sabres’ future.

Skinner could’ve become an unrestricted free agent July 1. Botterill said he had to hire a coach – Ralph Krueger was officially announced May 15 – before he could work on Skinner’s deal.

“Once we had a head coach in place, we had to go through the process of making sure the head coach interacts with Jeff, and then you start talking to him,” Botterill said. “It’s not just a simple thing of, ‘Hey, here’s a numbers thing.’ When you’re looking at thing like this, there’s structure, there’s different clauses that you have to look at the entire package.”

“Jason’s actually working out at our facility here right now,” Botterill said. “We’ve kept a dialogue open with him. (It’s) not surprising Jason has worked extremely hard in the offseason. We’ll continue that dialogue through the summer. It’ll certainly dictate on how things sort of present itself during the talking period with free agents (later this month) and sort of what materializes from a trade front both at the draft and heading into July 1.”

Botterill on the Sabres heading into free agency:

“Our biggest focus … was getting Jeff signed and we’ve accomplished that. We’ll continue to talk to see if there is a fit to help out our team from that aspect and we’ll also look at (trades).

“Sometimes the more realistic option is through trades like we did last year with Conor Sheary and Matt Hunwick and utilize our cap space from that standpoint or adding a player like Jeff Skinner when we did later on in the summer.”