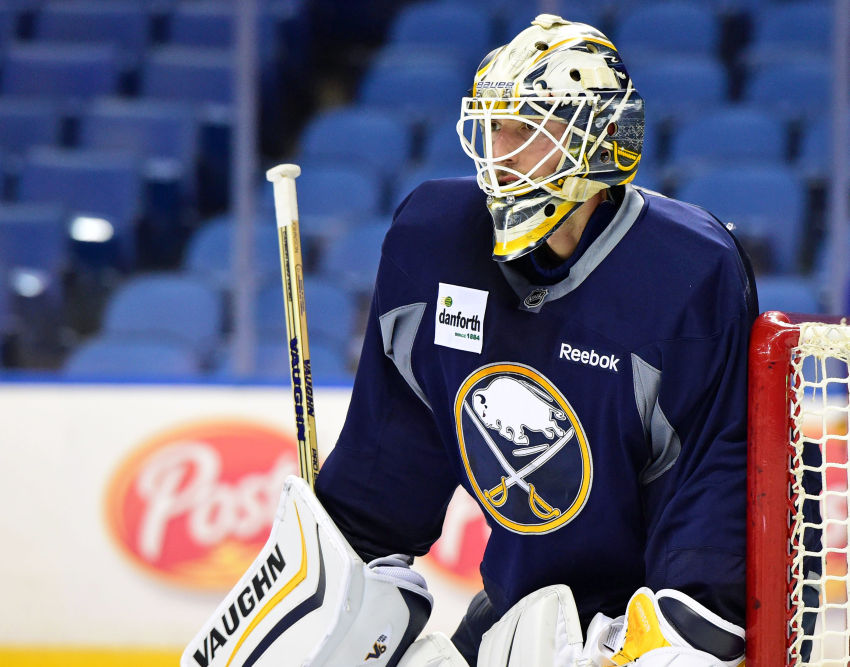 BUFFALO – A season in which he morphed from arguably the NHL’s best backup goalie into one of its least reliable hasn’t shaken Sabres newcomer Chad Johnson’s confidence.

After all, Johnson, 29, landed another good gig prior to the March 2 trade deadline, getting dealt from the upstart New York Islanders to the rebuilding Sabres, who planned to play him regularly.

That was, of course, before Johnson suffered a season-ending ankle injury the morning of his first scheduled start March 6 in Ottawa. Still, the Sabres liked his body of work so much they passed on acquiring another veteran during the summer.

Johnson might play 20 or 25 times this season as Robin Lehner’s backup. If Lehner, who has never started regularly, falters, Johnson could receive more work.

In the meantime, Johnson will likely start tonight in Minnesota against the Wild, his third preseason nod.

“He wants the net, needs to get in the net and prove he can play and win hockey games,” Bylsma said. “I don’t think he’s just come in here to be a reliever for eight games, 10 games, whatever that might be. …

“That’s fine with me. He doesn’t need to take a backseat. He’s going to get the net a handful of times or a couple handfuls of times, and we need him to step in there and do the job.”

Johnson enjoyed a breakout season with the Boston Bruins two seasons ago, going 17-4-3 with a 2.10 goals-against average and a .925 save percentage in 27 appearances behind Tuukka Rask.

“It wasn’t a good fit,” Johnson said. “I felt like I got better. My game wasn’t where I needed to be. For whatever reasons, it wasn’t there. I did improve. But ever since my senior year of college I think I’ve had that right mindset, the right edge and the right people to help me get that support.”

In bad times, Johnson said he draws “bigtime” on his lone season in Boston.

“Obviously, you can talk about how Boston was a good team … but I had a lot of good games there,” he said.

The Isles wanted better insurance and dealt Johnson and a third-round pick to the Sabres for goalie Michal Neuvirth.

Johnson, who watched as Anders Lindback handled goaltending duties down the stretch in March and April, said he gets along well with Lehner, one of the Sabres’ big offseason acquisitions.

“I’m looking forward to working with him,” he said. “He’s definitely a character.”

Naturally, Johnson hopes he has found a home. The Sabres are his fifth team – he also played for the New York Rangers and Arizona Coyotes – since he broke into the league in 2009-10.

“To a certain point it’s fun,” Johnson said about moving around. “I got to experience New York City, Long Island, the history there, and obviously Boston, winning the Presidents’ Trophy. …

“There’s a lot I can draw from different goalies I think has helped me improve. It’s tough as well working with so many goalie coaches. I think that’s the toughest thing, having to get to know all kinds of players, coaching staff. You never really could get settled in. So I think … it was nice I was here last year for two months.”