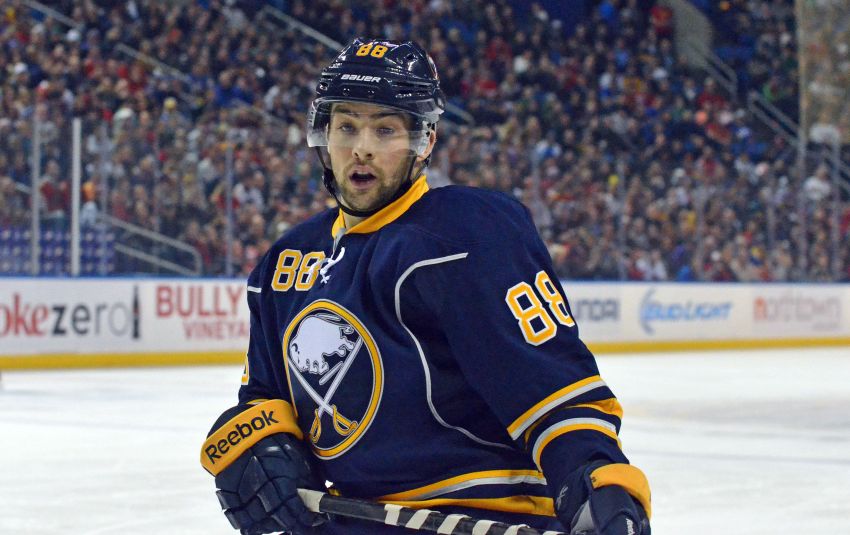 BUFFALO – While the Sabres never told newcomer Cory Conacher he couldn’t wear No. 89 again, the winger passed out of respect for Alexander Mogilny, who scored 76 goals in 1992-93.

“I don’t think I’ll be able to get 76 goals in a year, that’s going to be pretty tough,” Conacher joked Sunday inside the First Niagara Center prior to his Sabres debut, a 2-1 loss to the Chicago Blackhawks.

Conacher then settled on No. 88, digits popularized by South Buffalo’s Patrick Kane, a Chicago superstar.

But before Conacher, a Canisius College product, officially grabbed the number, he texted Kane, someone he skates with during the summer.

“He just texted me, he’s like, ‘I’m going to wear your number in Buffalo, is that all right?’” Kane said. “I was like, ‘Yeah, you don’t need to be asking me about that stuff. It’s fine.’”

Visa issues delayed Conacher’s debut after the Sabres claimed him off waivers from Ottawa on Wednesday. He played beside center Tyler Ennis and Drew Stafford, recording a nifty assist on Stafford’s first-period goal by drawing Blackhawks goalie Corey Crawford out of the net.

“Right now, it’s been a trying time,” interim Sabres coach Ted Nolan said. “We’ve got a lot of guys in and out of the lineup. Mitchell came in, I like what I saw of him in the first period, all of sudden the second period he’s gone for a length of time.”

Before the Sabres skated Sunday morning, winger Patrick Kaleta, out since tearing up his knee in November with Rochester, skated alone. Kaleta has a stall in the dressing room again.

Kane loves that he can blend in and simply be a regular guy in Buffalo. It’s one of the reasons he makes his summer home here.

“I don’t get any star treatment,” Kane said. “Maybe people recognize you here and there. Except for maybe today, throughout the summer I feel like I’m a regular 25 year-old guy. That’s one of the reasons I come back. That’s one of the best parts about it.”

Kane hasn’t spent much time in Buffalo during the season, however. Sunday was only his fourth NHL appearance here and first since Oct. 12, 2010.

With the new schedule, the winger will visit Buffalo once a season.

“It’s something that’ll happen every year from here on out,” Kane said. “But up until this year it feels like I haven’t played here in a while. It’s exciting being back home, seeing some family and friends last night.”

Kane visits are a popular event. A few hundred fans watched Sunday morning after the Sabres opened the skate to the public. He didn’t disappoint later, wowing the crowd with a nifty first-period goal.

The 31-year-old NHL veteran never reported to Rochester after getting dealt twice in two days. The Sabres suspended him Sunday.

“With all due respect to the Sabres organization, I decided this week not to continue playing hockey this season,” Klesla said, according to Dreger. “It has been a tough year for injury and moving several times to new teams. I will now take some time off and get ready to continue my career in Europe.