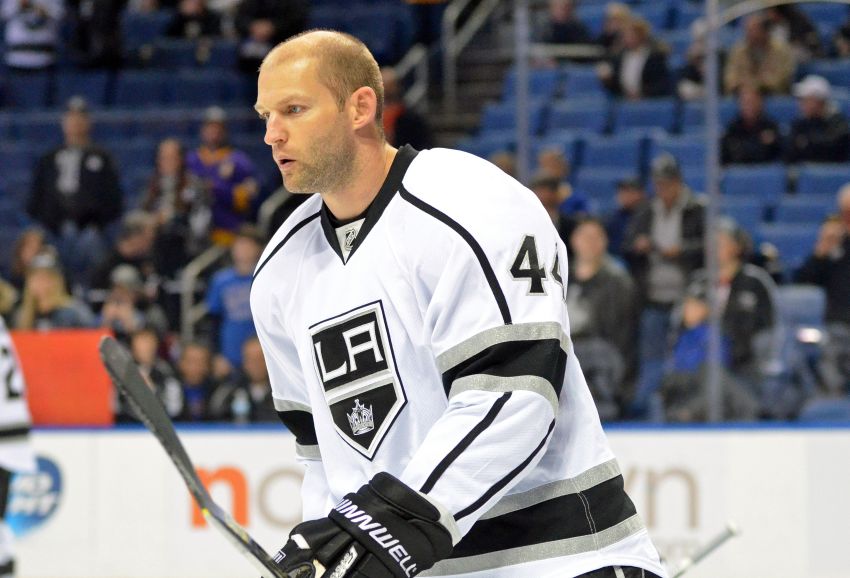 BUFFALO – Robyn Regehr and the rest of the Kings had a team function at the Los Angeles Zoo last week, at a time when the city’s infamous traffic was awful.

The players all got there, albeit two and a half hours late.

“Very different living,” Regehr said Tuesday prior to the Kings’ 3-2 shootout loss inside the First Niagara Center, the defenseman’s first game here since the Sabres traded him for two second-round draft picks April 1.

But aside from some crazy commuting, Regehr has adjusted well to his new team and surroundings.

The 33-year-old, a key cog in the Kings’ run to the Western Conference final last season, signed a two-year extension during the playoffs. Regehr’s thriving again under Darryl Sutter, who also coached him three seasons in Calgary.

“I thought it would be good for me to fit back into that,” Regehr said. “I think when I’ve played my best hockey, it’s been under him, the teams that he’s coached. (I) just thought I’d try it again.”

Regehr left Buffalo with considerably less fanfare than his arrival.

Back then, the Sabres were adding pieces to a team they believed would contend for the Stanley Cup. Regehr, they figured, was the sturdy, shutdown defender they sorely needed.

So the Sabres convinced Regehr to waive his no-trade clause and leave Calgary at the 2011 NHL Entry Draft.

But the Sabres struggled during Regehr’s 105-game tenure.

“I’m disappointed with the first year that I was here,” Regehr said about missing the playoffs in 2011-12. “I felt we had a better team than what we played at.”

By late last season, as the Sabres trudged to their 12th-place finish, it appeared Regehr might be willing to waive his no-trade clause again.

What did he weigh?

“The only thing was at the time where the teams are,” Regehr said. “At that point, it looked like we weren’t going to make the playoffs here in Buffalo, and in L.A. things looked a lot better than that. I thought I had a decent shot at having a good run at the Cup, which we did.”

Still, leaving Buffalo wasn’t easy for Regehr and his family.

“We loved it,” he said. “It was something that … I know my wife was very emotional about it because she made some very good friends here. We were treated better than I’ve ever been treated anywhere else, not just by the hockey team and the organization, but by the people of Western New York. We lived in the city, which not a lot of with young families live in the city, but (we) thoroughly enjoyed it.”

Regehr said given “that type of rebuilding process,” the Sabres’ struggles this season haven’t surprised him.

So, does Sabres winger Ville Leino know why coach Ron Rolston scratched him for Friday’s 6-2 loss in Anaheim?

“Not really,” Leino said prior to returning against the Kings.

Can Leino, who had one point and one shot in seven games entering Tuesday, guess why he sat?

Notes: With defenseman Christian Ehrhoff back from a muscle strain, rookie Nikita Zadorov sat for the fourth time in six games. … The Sabres also scratched forwards Johan Larsson and John Scott. … Rookie winger Joel Armia, out since breaking his hand during the preseason, will make his North American debut with Rochester today against the Hamilton Bulldogs. … Sabres play-by-play man Rick Jeanneret called the game from between the benches wearing a helmet with a full shield. An elevator malfunction forced him to ice level. The Kings’ Brandon Nolan nearly hit him in the second period.