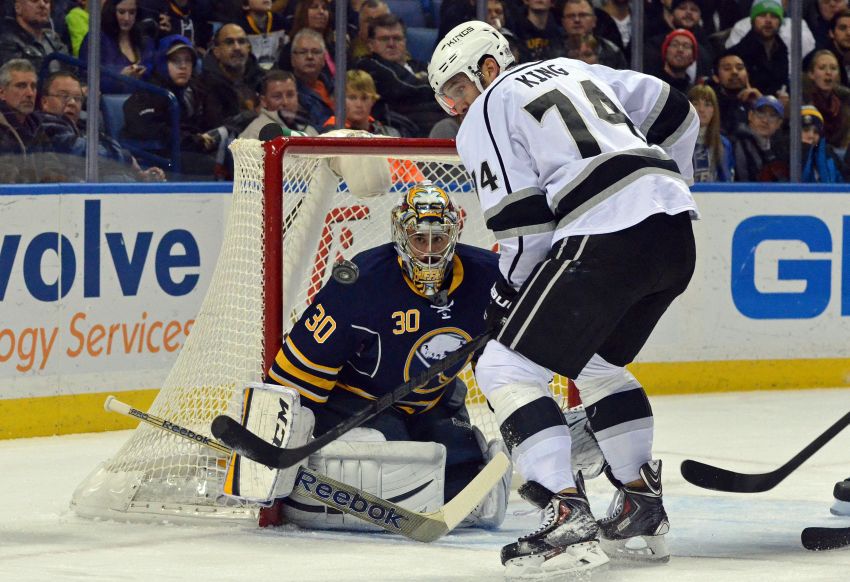 Miller had just finished another dynamic performance Tuesday, making 43 saves and two shootout stops in the Sabres’ 3-2 triumph against the Los Angeles Kings inside the First Niagara Center.

Ennis has been Miller’s friend and teammate five seasons, including the end of his scintillating 2009-10 Vezina Trophy campaign.

But watching Miller stymie the Kings and keep the Sabres in Tuesday’s contest wowed him.

“I was like, ‘Every time I think you’re the best goalie in the world you are even better than I think,’” Ennis said. “He was so good tonight.”

The Sabres’ fourth victory this trying season proved that no matter how wretchedly they play, Miller’s presence in net always gives them a chance.

“My job doesn’t change, fewer shots or more shots,” said Miller, who outdueled counterpart Jonathan Quick, a possible Team USA Olympic teammate this winter. “The season’s a nice way to remind me what my job is and to handle myself. My job continues to be stop the puck in no matter what the situation is in the game.”

The Kings held a 15-4 shot advantage following the first period and a 30-7 advantage after 40 minutes.

“It is all him,” Sabres captain Steve Ott said about Miller. “He was solid.”

Somehow, the Sabres scratched their way back against one of the NHL’s true heavyweights despite sprinkling only 17 shots on net.

After Justin Williams opened the scoring 1:17 into the game on the Kings’ second shot, Cody Hodgson, fresh off a 26-minute benching Friday, tied it 12:46 into the second period, setting the stage for a wild third period.

What was said during the second intermission?

Incredibly, Hodgson’s power-play score put the Sabres up 4:26 into the third period, igniting the crowd of 18,281 fans who had spent much of the game moaning and imploring the Sabres to shoot.

But Mike Richards stripped Ennis, who was benched with Hodgson, deep in the Buffalo zone. A second later, Dwight King tied the game at 16:26, the Kings’ 41st shot.

“I just came and supported and got the puck and looked up and didn’t have any options,” Ennis said. “As soon as I looked up, I didn’t make a decision. That’s when you get poked. It turns around and goes in the net. (I) just maybe got to flip those out.”

The Sabres killed two penalties in overtime. Then, following Matt Moulson’s shootout score and two Miller stops, Sabres coach Ron Rolston sent Ennis over the boards for the third round.

What was he feeling?

Ennis zoomed in and beat goalie Ben Scrivens, his summer workout partner back home in Edmonton, between the pads. Scrivens replaced Quick in overtime after the former Conn Smythe Trophy winner suffered an undisclosed injury.

“Normally, I go fake shot, backhand, forehand,” Ennis said. “But I think he knows that pretty well. (I) just tried to fool him and shoot it quick.”

“We’ve put ourselves in a position to win games in this league,” Ott sad. “If this game was on the road, would we have taken that same exact win? Absolutely. … It wasn’t pretty. It wasn’t a Picasso.”

Ennis added: “That’s kind of what we talked about before the game, getting a road win at home. That’s kind of how you do it. We know we got to lean on Millsie a lot of the time.”

Still, the Sabres did some things well.

“I think the sacrifice,” Ott said. “Guys blocked a lot of shots. We did a lot of little things well in the game. Obviously, Millsie was the difference-maker for us. But we scratched and clawed and got ourselves a big win tonight.”

Miller, who’s already made 492 saves this season, added: “We’re all working together a little more in the zone, so that helps makes reads. These are the kind of games where guys hang around, understand we need to do little things to stay in hockey games if things don’t go our way.”