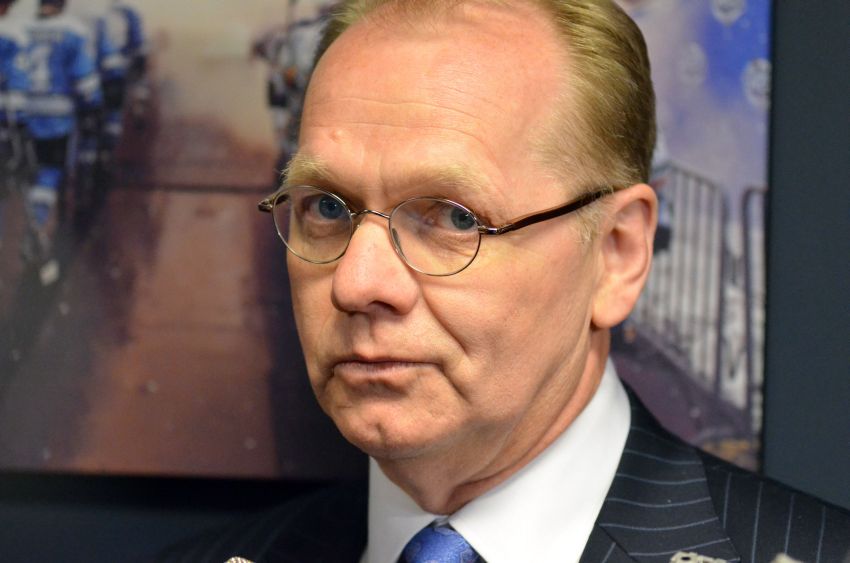 BUFFALO – Given their 12th-place standing with Wednesday’s trade deadline approaching, the Sabres must listen to “anything and everything” available to them, general manager Darcy Regier said Saturday after trading veteran defenseman Jordan Leopold.

“I am listening. I have talked to all 30 GMs over the last, if I say week, it certainly takes in all of them,” Regier said Saturday prior to the Sabres’ 4-3 shootout loss to the Washington Capitals inside the First Niagara Center. “I’ll continue to try to figure out ways we can be better, not just for the rest of this year but, more importantly, for the future.”

Dealing current core players could create a new group of stars for the future.

Regier was speaking after dishing Leopold to the St. Louis Blues for a second-round pick and a conditional fifth-round pick that could turn into a fourth-rounder in June’s NHL Entry Draft.

Could Saturday’s trade be the first of several?

“I don’t know,” Regier said. “We’re going to try to do some things whether it works out. The trade deadline, you can feel at times that you’re going to get a lot done and not get anything and vice versa. You can feel like you’re not making much headway and you end up doing more things. I think it’s still too early.”

Regier has been asked about Miller, who has a limited no-trade clause. Rumors are flying – some from credible sources – the former Vezina Trophy winner could be dealt.

“I get asked about every player, including Ryan, sure,” said Regier, who refused to say if Miller had submitted a list of teams he would accept a trade to.

With the salary cap coming down next season, it could be difficult for the Sabres to keep Miller, Pominville and leading scorer Thomas Vanek, whose contracts all expire after 2013-14.

“It’ll all come down to the numbers,” Regier said. “I think if you look at Anaheim, they obviously signed their big guys (Ryan Getzlaf and Corey Perry). … There’s only so many of those players you can have on the roster. That’s the way it is, and you need top-quality young players to fill out.”

Regier would consider trading some of the Sabres’ top prospects, too.

“Quite honestly, if there’s a deal that makes sense and it involves one of those younger players, it could possibly happen,” Regier said. “ … I wouldn’t single out anyone. But I think if the focus is in the right position for us organizationally, an area where we still have a need, we’re open.”

The Sabres filled Leopold’s opening by playing impressive rookie Mark Pysyk after one scratch. The 21-year-old should have a spot the rest of the season.

“Mark is going to be a very good NHL player, and this is a test period for him,” Regier said. “He’s handled it very well to this point, and so we’ll kind of ride it out right now.”

It was believed the Sabres would deal Leopold instead of letting him walk for nothing.

The versatile Leopold struggled much of the winter, even sitting as a healthy scratch before an injury sidelined him eight games.

When he was healed, interim Sabres coach Ron Rolston sat him an extra game. Leopold rebounded, though, and Rolston played him more than 20 minutes most contests.

“I’m not scared, no,” Leopold told the Times Herald on Friday about possibly being dealt. “I have a job to do day in, day out. Things that I can’t control, I’m not going to stress over.”

He added: “Those are the things people don’t see when you get traded, the family aspect of travel, the moving, long nights, early mornings – that kind of stuff, getting acquainted with your teammates. … I would like to have a future here.”

Notes: Vanek (muscle strain) missed his second straight game. Rookie winger Brian Flynn replaced tough guy John Scott after a one-game absence. “His energy, I think more than anything lately, was a little down,” Rolston said about Flynn. “So just building that back up and being ready to go here for the last push.” … Sabres prospect Brayden McNabb (lower body) is out for the season. The defenseman was recently hurt playing with Rochester. “It’s unfortunate for development,” Regier said.