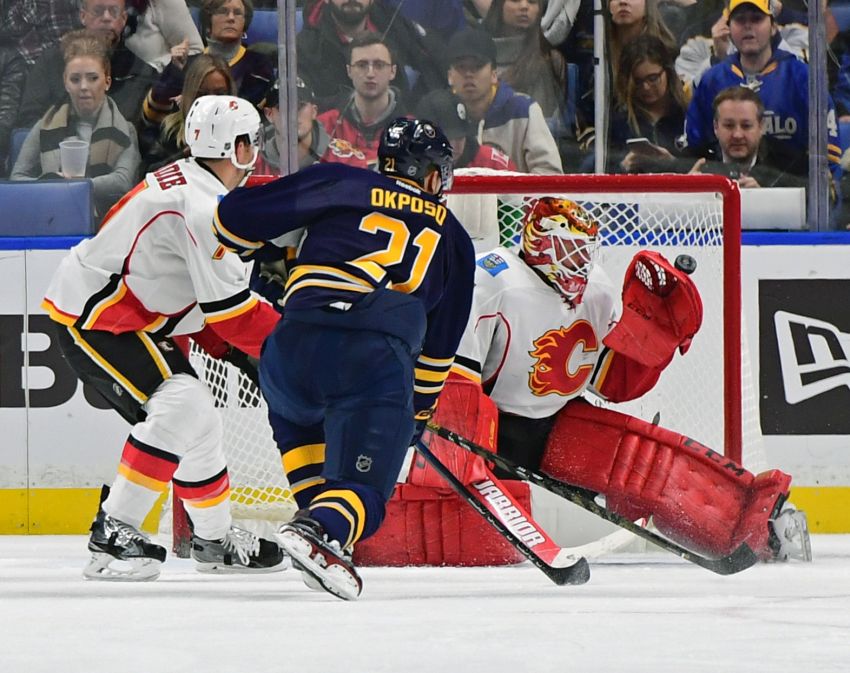 BUFFALO – For almost 30 minutes Monday, the Sabres’ 4-2 win against the Calgary Flames looked like almost every other home game this trying season.

The Sabres, having scored two or fewer goals in 10 straight games, showed why they have the NHL’s worst offense. The crowd of 17,526 fans inside KeyBank Center, meanwhile, barely made a peep.

To that point, the biggest roar of the night was reserved for Buffalo Bills quarterback Tyrod Taylor, who was briefly shown on the video boards.

Then, thanks to a string of penalties taken by the Flames, the Sabres offense broke loose for one of the few times this season, scoring three power-play goals in a span of 1:21.

“It’s a lot of goals in a short amount of time for our team,” coach Dan Bylsma said following just the Sabres’ third home win this season.

“I could tell we were just chomping at the bit for the floodgates to open, and that second period was huge for us,” Sabres defenseman Taylor Fedun said. “I think everybody was able to take a bit of a deep breath when we started to score some goals there.”

Kyle Okposo tied the game at 11:27, his first goal in eight games. Johan Larsson followed at 12:03, his first goal in 10 games. Matt Moulson completed the bonanza at 13:08, scoring his team-leading seventh goal and sixth on the power play.

The Sabres hadn’t scored three goals that quickly since netting three in 1:08 against Boston on April 3, 1998, according to the Elias Sports Bureau.

The crowd, meanwhile, let loose and celebrated for one of the few times this season.

“It was nice to see the crowd into it and get loud for us,” said Okposo, who had two points. “We appreciate that. We’re going to try to put some pucks in the net for them.”

The Flames’ lack of discipline, of course, buoyed the Sabres, who have won two straight games for the first time since a three-game winning streak Oct. 29 to Nov. 1.

“I give Tim Peel a lot of credit for making the call because it was the right call,” Bylsma said.

After Matthew Tkachuk made it 3-2 just 22 seconds into the third period, Marcus Foligno sealed the game at 2:13. The Sabres had a fourth goal for only the second in 19 games this season.

“I thought it was a huge goal for our team,” Bylsma said.

Fedun, 28, has been a huge addition for the Sabres. With two more assists Monday, the newcomer has four in three games. Incredibly, he has 11 points in 15 NHL appearances, a big number for a defenseman.

“It’s a nice, positive reinforcement for what I consider to be the right way of playing the game,” Fedun said. “I keep things fairly simple and move pucks to our forwards, and I’ve been having success with that.”

“We hoped he could show the poise and the puck play on the power play, which he has,” Bylsma said. But I think he’s even shown that he can defend and (he) battled it out hard tonight on the defensive side of the puck. That may be a bit of a surprise for me.”

Bylsma made a bit of surprising decision in net against the Flames.

Instead of awarding backup goalie Anders Nilsson another start following his 46-save performance in Saturday’s 2-1 shootout win against Pittsburgh, Bylsma turned back to No. 1 Robin Lehner, who made 29 saves.

Nilsson, Bylsma said, has earned another start and will play again later this week.

The Sabres finally solved Lehner’s counterpart, Brian Elliott. The Flames goalie began the night 11-0-2 with a 1.68 goals-against average and a .943 save percentage in 13 games against the Sabres.