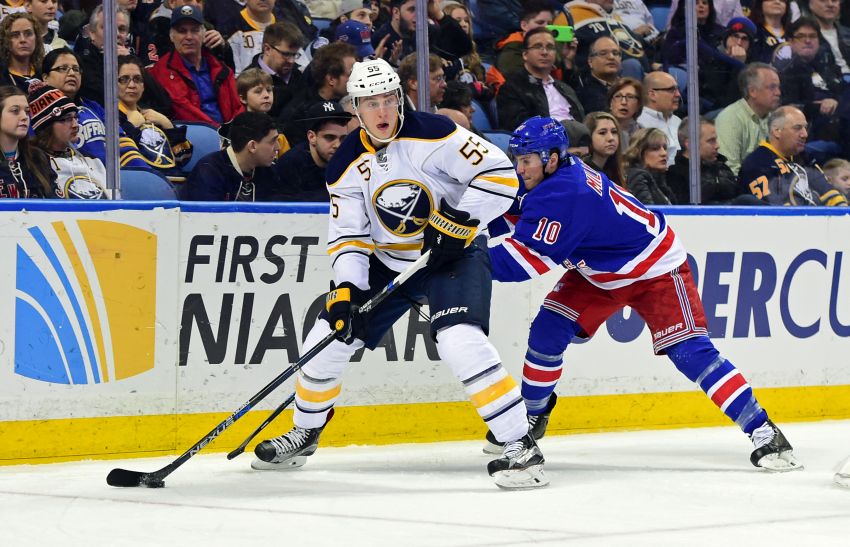 BUFFALO – Twelve Sabres, including six defensemen, have zero goals this season, so Rasmus Ristolainen is hardly alone in his offensive struggles.

As the Sabres’ top defenseman, the Finn is expected to score goals. Right now, he has nine assists and 39 shots is 19 games.

“If you look back to last year as well, how did the goals come?” Bylsma asked this afternoon inside KeyBank Center. “He had three in one game (Dec. 10). They tend to come in bunches. He hasn’t had one at this point in time when I expected him to, yes. But I don’t see a reason why not.

“He’s had the opportunities and chances to get the puck on net for goal opportunities that I think he needs to have to have gotten goals. So I’m not too concerned whether it’s one or two or zero at this point.”

Bylsma, however, is concerned about Ristolainen’s sticks. Ristolainen has broken so many recently at key times Bylsma briefly took him off the power play in Monday’s 4-2 win against Calgary until he changed sticks.

“He hasn’t completed a lot of the key opportunities, shots on net with a complete stick,” Bylsma said. “I think maybe a few of those opportunities, a goal opportunity that he may have at this point in time.”

“It was just a game decision,” Ristolainen said.

“Right now, I don’t really know what I’m going to go with or anything about the sticks,” he said. “I think about today and let’s see tomorrow.”

In other news, center Ryan O’Reilly, out the last five games, skated in the team’s optional practice today and could play Wednesday against Detroit. O’Reilly took faceoffs and participated in battle drills.

“I thought he shot the puck particularly well today, if that’s any indication,” Bylsma said.

O’Reilly has said playing against the Red Wings is “doable.” He is officially day-to-day.