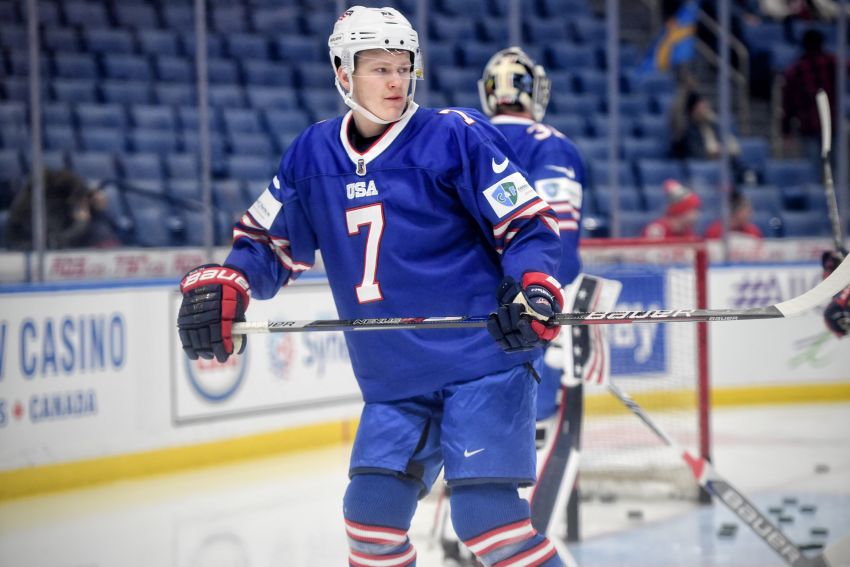 The Sabres might get an opportunity to draft Brady Tkachuk. ©2018, Micheline Veluvolu

TORONTO – If the Sabres lose tonight’s NHL Draft Lottery – given they have just an 18.5 percent chance at the No. 1 pick, defenseman Rasmus Dahlin likely won’t be coming to Buffalo – the consolation prize won’t be a talent as special as center Jack Eichel.

Three years ago, after a season of not-so-subtle tanking garnered the Sabres the highest odds at the top selection, they dropped to second in the lottery.

Instead of winning the opportunity to draft center Connor McDavid, hockey’s biggest prospect in a decade, they “settled” for the chance to take Eichel.

Don’t expect anything like that to transpire tonight inside the CBC building, where the lottery will take place again.

The NHL, probably thanks to the Sabres, changed the lottery rules. The league’s worst team – that, again, is Buffalo – is no longer guaranteed at least the second pick and can drop all the way to fourth. That happened to Colorado a year ago, when the New Jersey Devils, Philadelphia Flyers and Dallas Stars jumped over the Avalanche.

After Dahlin, the consensus top pick, the draft falls off, meaning if the Sabres don’t win, they likely won’t nab an NHL-ready youngster in June.

Sure, they’ll select a terrific prospect. Still, Russian Andrei Svechnikov and American Brady Tkachuk, two wingers slated to go early, might need a year or two to crack the league.

There is no Eichel in this year’s draft.

If the Sabres end up with the second, third or fourth pick, new GM Jason Botterill, whose personality is nothing like his fiery predecessor’s, probably won’t showcase any emotion.

But if the Sabres win the lottery, Botterill, the team’s representative at the event, will surely be smiling.

Dahlin, who turned 18 years old April 13, could transform the franchise. Like McDavid, the “generational” label has been put on the Swede, who possesses the skills and maturity to step into the NHL next season and immediately be a difference-maker.

It can be argued Dahlin is the best defense prospect to come along in decades.

“He is a complete package with an unbelievable set of skills,” wrote Göran Stubb, the NHL’s director of European Scouting, in an email to the Times Herald. “(He is) a two-way player with terrific skating, great stickhandling, excellent vision. A young talent who plays a mature great game.”

The Sabres, of course, need help everywhere. But the blue line might be their biggest weakness. Plugging in the versatile Dahlin for more than 20 minutes a game would radically change them.

If the 6-foot-2, 183-pound Dahlin had played this season in North American instead of the Swedish Hockey League, the hype surrounding him would be tremendous.

Dahlin thrived for Frölunda HC in 2017-18 competing against men, compiling seven goals and 20 points in 41 games. He was so impressive he earned a spot on Sweden’s Olympic team as a 17-year-old, making two appearances at the Pyeongchang Games. He also played seven contests in Buffalo at the World Junior Championship.

“He had a great season (in) 16-17, and this year, 17-18, fulfilled all expectations,” Stubb said. “(He) had a big role on his club team and did make the Olympic team. (It was) a bit surprising that he did not have a bigger role in the Olympics.”

Unlike past years, the NHL will reveal the results of the lottery throughout the night. Picks 15 through four will be shown on NBC and CBC during a pregame show at 7:30. The final three will be unveiled during the second intermission of the San Jose Sharks/Vegas Golden Knights second-round tilt.

Here are the lottery odds: