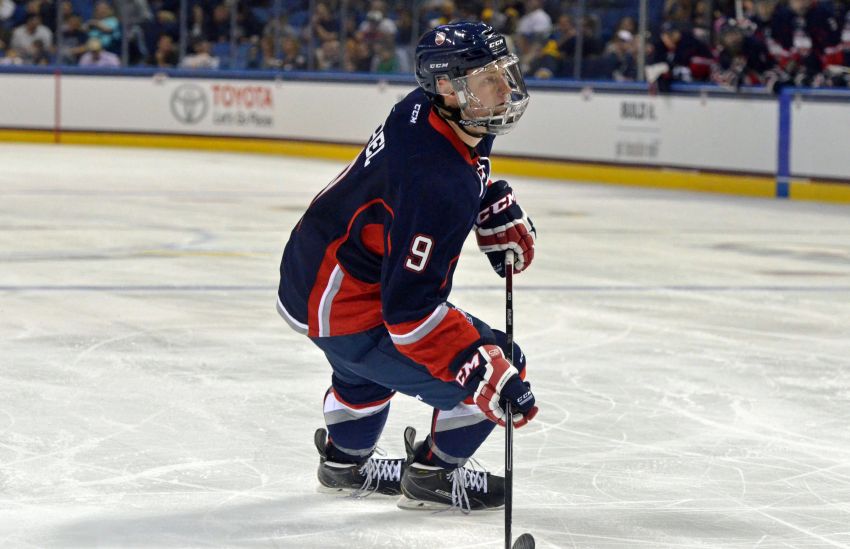 TORONTO – All season long, as the Sabres stayed in the basement and Connor McDavid mania reached a fever pitch, this was the likely scenario: the rebuilding club would lose the NHL Draft Lottery and Jack Eichel, not hockey’s most coveted prospect, would come to Buffalo.

Sure enough, it played out Saturday in a room inside the CBC building.

Incredibly, the Edmonton Oilers, who had only an 11.5 percent chance at the No. 1 pick, won the right to draft McDavid. The Sabres, who had a league-high 20 percent chance of winning, settled for the No. 2 selection, a spot their last-place finish guaranteed them.

The Sabres, of course, will draft Eichel, an 18-year-old superstar center who just finished a dynamic freshman season at Boston University.

General manager Tim Murray had prepared himself for the Sabres to lose. Still, he looked and sounded disappointed discussing his consolation prize.

“We’ve said along there’s two top-end, impact players, if not franchise players, in this draft,” Murray said inside the Toronto Ritz-Carlton. “They both play the right position (center), in my opinion, for rebuilding. As disappointed as we are in not having the No. 1 pick, we’re extremely happy to be able to pick two still.”

“I feel for the fans,” Murray said. “I mean, we went through a tough year, and I think that they were extremely excited about Connor.”

Murray said he was disappointed in the lottery process, not losing it.

“I believe that the team that finishes last is probably the worst team in the league, so therefore they need the best player … to get better quickly,” he said.

In any other year, Eichel would be the No. 1 pick. The Sabres have an opportunity to draft a youngster who could become a generational talent.

But Eichel wouldn’t commit to leaving school and turning professional. He just lost the national championship game. Perhaps another run to the Frozen Four could lure him back to college.

Speaking on a conference call, the American said he would make his decision after the draft in June.

“It’s tough to be thinking about that when you’re playing and you’re competing for a championship,” said Eichel, whose season ended eight days ago. “For me, I’m going to take a week or so to wind down and reflect on my season. I haven’t really put much thought into it.”

He added: “I’m sure a decision will be made at the right time. Right now, I have a long way to go. With that being said, it’s a dream. I’d love to play in the National Hockey League.”

“He’s as ready as 99 percent of the kids that have jumped into the National Hockey League,” he said.

After Murray drafts Eichel, he plans to ask him about his future.

“That’ll probably be the second thing I say to him after the draft, ‘Congratulations and what are your plans?’” he said.

Murray added: “There’s probably, hockey-wise, not a lot of reason to stay in school.”

When Eichel turns pro, Murray’s confident the youngster and 19-year-old Sam Reinhart, the No. 2 pick last year, will give the Sabres the centers they need to become a top team.

“We feel we have two guys now in the organization that they grow, as they get bigger and stronger and better, that we’re going to be in a position that teams are going to talk about us in the same way I’m talking about Pittsburgh and different teams,” Murray said.

Is Buffalo’s goal to make the playoffs next season?

“I would like to think it is, yes,” he said. “Can we get the things done this summer, can we attract the right players, can we make the right trades? I can’t answer that today, but I can tell you we’ve done our homework, we’ve laid the groundwork.”

Murray has no plans to trade the pick. He would listen to teams, however.

“It doesn’t cost me anything to listen,” he said.

The Oilers, meanwhile, won the lottery for the fourth time in six years, an incredible run of luck that hasn’t translated to one playoff appearance. In fact, the phenom going to Edmonton could be the NHL’s nightmare scenario.

If McDavid was disappointed, he didn’t show it.

“It’s obviously weird and something that you’ll never be able to live again,” he said. “This day only happens once in your life. It was fun and exciting. It certainly got my heart beating. It all worked out.”

Murray wants to work out the draft process.

“One team is happy and the other team isn’t,” he said. “I don’t know what they’re going to do with it. The league may think this is the best system, and if it is, I support them. … We’ll get back to work tomorrow and get ready for the draft.”