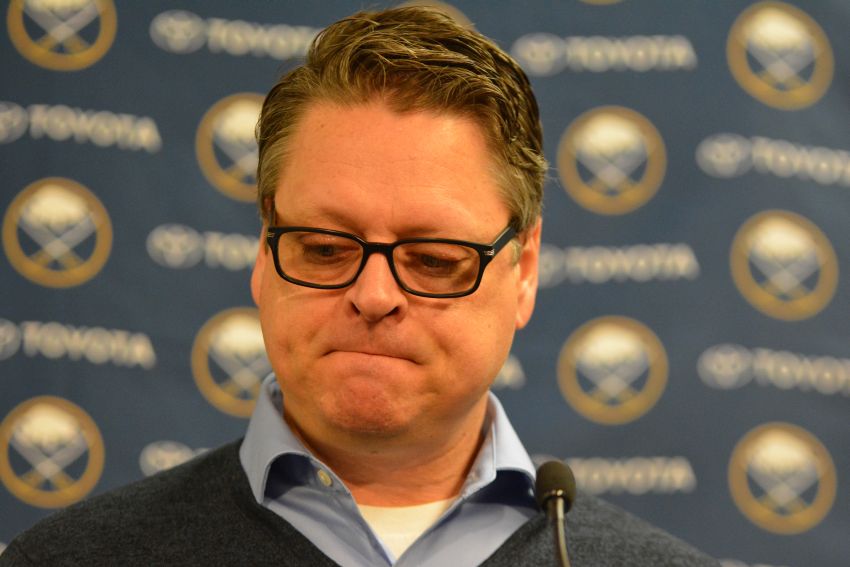 Multiple media outlets have reported the Sabres thought they landed Babcock earlier this week and were livid when he went to Toronto on Wednesday.

“I talked to lots of teams, and when you’re talking to teams, negotiation is in that process,” Babcock said this morning during his introductory news conference at the Air Canada Centre. “The hardest thing for the media to do was to figure out where I was going, because I had no idea where I was going … because it was a hard decision. We … went back and forth so many times trying to figure out what the right thing to do was.”

In an interview with WGR this afternoon, Sabres general manager Tim Murray said he never thought he had secured Babcock’s services.

“We were in negotiations of a contract, knowing full well that end of the day there’s no deal done until he says, ‘I’m coming to you,’” Murray said.

Murray said the belief the Sabres were upset over losing the coach is “ludicrous.”

Babcock was asked if he lied to the Sabres.

Babcock said he had no problems with Buffalo’s front office structure. Murray said Babcock never asked for any control.

“If you think (owner) Terry Pegula isn’t a star, you’re mistaken,” Babcock said. “Or that Mike Babcock and Tim Murray didn’t have a great relationship, that’s wrong, too. In the end, I wanted to coach the Maple Leafs, and this was the best fit for my family. When you put the two together, that’s what happened.”

Meanwhile, in a move many expected, the Sabres have received permission from the Pittsburgh Penguins to interview Dan Bylsma about their coaching vacancy, according to ESPN.com.

Murray wouldn’t confirm the report. He said he spoke to “one or two” candidates before, during and after courting Babcock.

What is Murray looking for in a coach? He hasn’t zeroed in on one type of candidate.

“I’m open-minded,” Murray said. “I’ve always been open-minded about coaches. How does a guy like Mike Babcock get his start unless you’re open-minded.”

Going after Babcock “was a great process,” said Murray, who has never searched for a coach as GM. A year ago, Murray kept Ted Nolan, who was already with the Sabres when he arrived, before firing him April 12.

In other coaching news, Murray said he hasn’t had any in-person interviews for the Rochester Americans’ opening. He could be so impressed with a candidate for the AHL club he decides he’s better fit for the Sabres.

Notes: Murray said he’s gotten a couple of calls on his No. 2 pick but he has no plans to trade it. Selecting Boston University center Jack Eichel next month will be “the easiest decision I think I’ll ever have in my general manager’s career.” … Murray said he would be willing to dish the 21st pick.