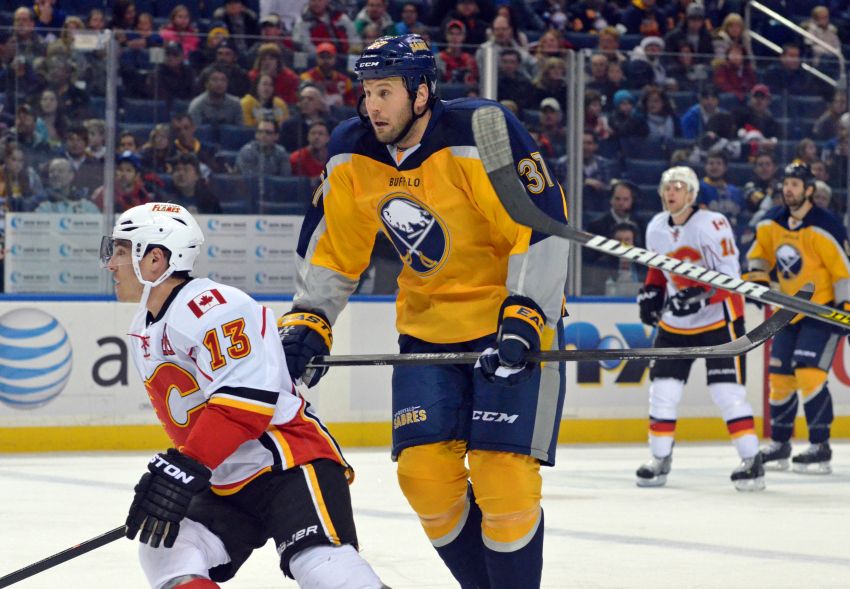 Cassidy had a special message for Ellis, who also had a goal and an assist in the “Frozen Frontier” game, an exciting 5-4 triumph played in 18-degree temperatures.

“(He) said, ‘The only thing that made tonight better is me getting to tell you you’re going up to Buffalo tomorrow,’” Ellis said Saturday afternoon prior to the Sabres’ 2-1 overtime loss to the Calgary Flames inside the First Niagara Center. “It was a special moment. It kind of surprised me a little bit.”

A great way to find out about a recall, huh?

“To be perfectly honest, it couldn’t have happened any better,” said Ellis, who played his first NHL game since Feb. 2.

With a 2 p.m. start Saturday, the 32-year-old wasn’t worried about playing his second game in about 16 hours.

Ellis skated 8:43 against the Flames, mostly on the left wing beside Ville Leino and Matt D’Agostini.

“I thought Matty played well for us, especially coming from a game last night, coming in here,” interim Sabres coach Ted Nolan said. “He’s a smart player. He did what was asked of him. He competed hard, made some good plays.”

Ellis said each recall “always feels like” the first one.

“A chance to put that jersey on again, it’s something special, it’s something I’ve always been proud of,” Ellis said. “To be able to come back here and do that again, it definitely drums up those same feelings.”

He has five goals and 10 points in 25 games with the Amerks this season.

It was believed Friday’s shootout attempt was Ellis’ first as a professional, although he said he had one in the ECHL in 2002-03.

He said Rochester teammate Colton Gillies jokingly told Cassidy that “Elly’s been hot today” and he should be used.

“Sure enough, Chadd said, ‘All right Elly, you’re up,’” Ellis said. “I was excited, a little bit nervous. A strange situation for me. But I was pretty pumped.”

“He was pretty close,” Nolan said. “He’s 80 percent. Playing this game at 100 percent is tough enough. So we’re going to wait until he’s healthy.”