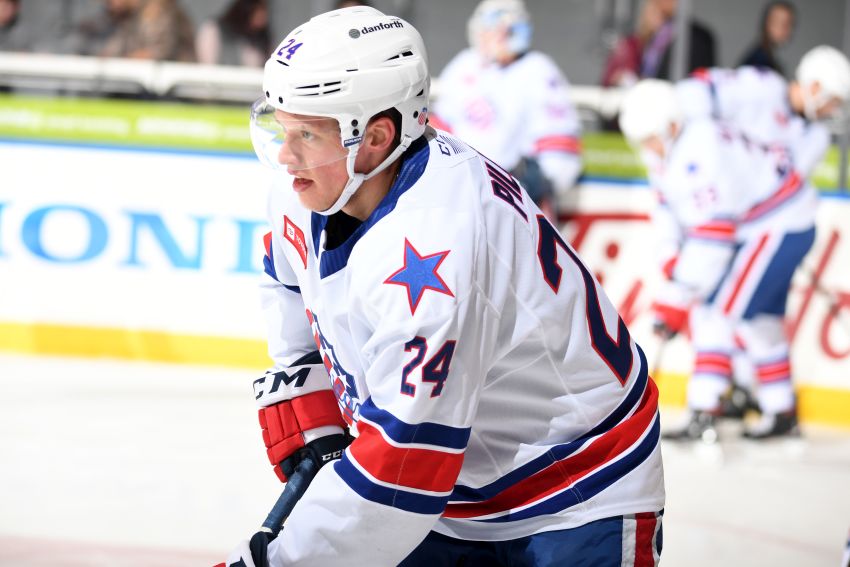 Lawrence Pilut has been a standout performer in the AHL. ©2020, Micheline Veluvolu, Rochester Americans

BUFFALO – Before the Sabres departed for Sweden in early November, they recalled defenseman Lawrence Pilut from the Rochester Americans for some insurance.

While Pilut, 24, did not play overseas, he practiced, giving Sabres coach Ralph Krueger an opportunity to watch the slick prospect up close for the first time.

Despite missing all of training camp as he recovered from offseason shoulder surgery, Pilut, who was recalled Tuesday, had made a positive early impression on Krueger.

The Swede, of course, was still around the team – “He left a really good mark in the way he was as a person,” Krueger said – he just couldn’t practice.

So spending a week around the 5-foot-11, 194-pound Pilut in Sweden allowed Krueger to learn more about the youngster’s on-ice talents.

“I was able to see firsthand what he’s capable of and where his abilities are,” Krueger said following Tuesday’s practice inside KeyBank Center. “So the first part was the person, second part was the hockey player.”

The Sabres summoned Pilut because an upper-body injury will sideline defenseman Jake McCabe for Thursday’s road game against the St. Louis Blues.

Pilut, one of the Sabres’ top prospects, was expected to earn a trip to Buffalo sooner or later.

“He’s gone down and played really, really well,” Krueger said. “We’re getting good reports back to us.”

Pilut played 33 NHL games as a rookie last season. Following a standout campaign with the Amerks in 2018-19, he has ranked among the AHL’s most dynamic defensemen again, scoring five goals and 21 points in 29 games.

He just earned his second straight selection to the AHL All-Star Classic.

“He’s got that foot speed and the hunger to close gaps and to play aggressively all over the ice while adding a really good first pass,” Krueger said. “He adds nicely to the offense.”

But Pilut said he started slowly after making his season debut Oct. 18.

“It took a couple games to just find the flow again,” he said. “Once you find it just never let go of it.”

He dazzled and played one of his best games Dec. 27, a rousing 4-3 victory against the Belleville Senators. After tying the contest late, he set up winger Taylor Leier’s game-winning goal with two seconds left in the third period.

Pilut’s 15 assists rank second on the Amerks. His point total trails only center Jean-Sebastien Dea. He has recorded three goals and eight points in his last nine outings.

After five seasons in the Swedish Hockey League – he was named the circuit’s top defenseman two years ago – Pilut quickly morphed into an AHL star last year, compiling a whopping 22 points in his first 15 games.

By early December 2018, he had forced the Sabres to give him a look. His impact, however, was minimal, and they sent him down in late February.

Pilut said the NHL taught him he must “keep being fresh.”

“Make sure you come out with a lot of energy, just keep that mind fresh all the time, that’s a big thing,” he said. “I think that’s what I worked on a lot. I think I’m ready for that.”

Pilut, who practiced beside Brandon Montour on Tuesday, said his consistency has grown this season.

“(I’m) trying to play at a high level all the time and just try to focus on my D-zone play all the time,” he said. “I think that’s been a big part of me so far. I think I can just keep going on that and keep developing also the offensive skill I have.”

Pilut will need to utilize his array of skills against the powerhouse Blues, the defending Stanley Cup champion.

“It would be really exciting,” he said of facing the Blues. “I feel like I’ll be ready when the opportunity’s there.”

An opportunity could materialize soon. The Sabres have had a crowded blue line all season. But trading Marco Scandella to the Montreal Canadiens on Thursday might’ve created a new spot.

If Pilut performs well, he could stick around.