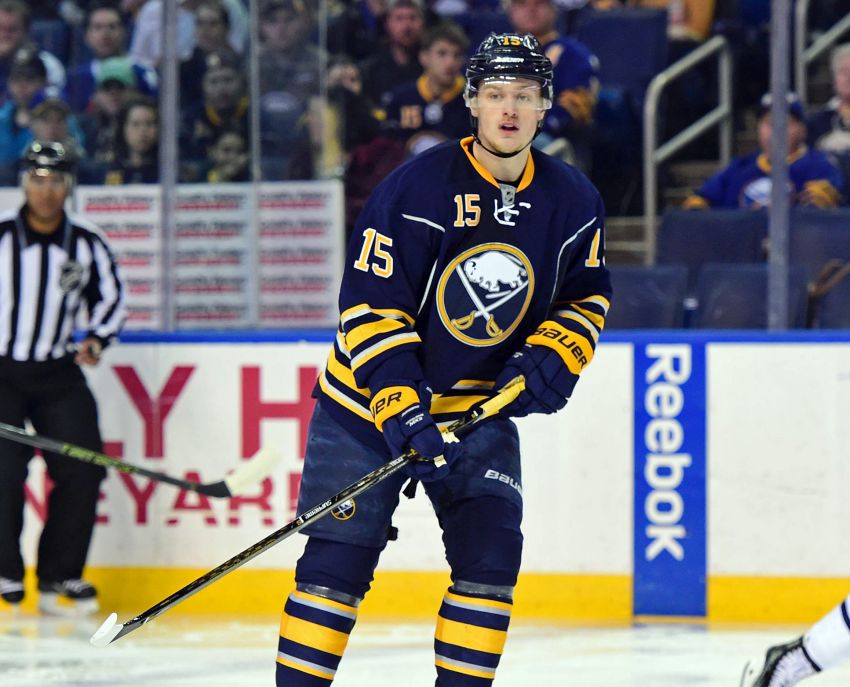 OTTAWA – The smiles told the story. They adorned the faces of Jack Eichel’s Buffalo Sabres teammates and his coach, Dan Bylsma, who looked relieved his young star could make his season debut tonight against the Senators.

Eichel, meanwhile, tried to keep his emotions in check following a 50-minute practice Monday inside KeyBank Center. The second-year center said he has passed every hurdle – “No real restrictions,” he said – in his recovery from a high left ankle sprain he sustained Oct. 12.

Eichel, who traveled to Ottawa, is officially day-to-day.

But some quick grins and other little looks accompanied his words. It certainly seems Eichel plans to play his first NHL game since April 9.

“It’s a little bit of a relief for everybody,” Bylsma said of Eichel’s imminent return.

The Sabres have mostly struggled without Eichel, a popular teammate. Whether they admit it or not, his injury on the eve of the season opener – he went down hard late in practice – rocked the team.

In 21 games without Eichel, the reeling Sabres have gone 7-9-5, scoring an NHL-low 38 goals. They’ve scored more than two goals only once while losing eight of their last 10 contests (2-5-3).

Eichel’s presence, of course, will provide a boost – on and off the ice.

Eichel, like Watkins, is a dynamic talent. Fresh off a 24-goal, 56-point rookie season in which he consistently improved, Eichel, 20, is expected to take another step toward superstar status this year.

“Everyone’s going to benefit from him getting back in the lineup,” Bylsma said.

With a healthy Eichel, the Sabres can field two scoring trios, meaning opponents can’t just focus on center Ryan O’Reilly’s line. Players bumped up in Eichel’s absence can also return to their regular spots. The ripple effect is huge.

Remember, though, the Sabres only scored 199 goals last season with Eichel, so don’t expect him to single-handedly ignite an anemic offense.

When Eichel scored, some teammates tapped their sticks.

“We lost something definitely when he got injured,” Foligno said. “Now we have that piece of the puzzle back. It’s a big piece.”

The Sabres originally said Eichel could miss six to eight weeks. Today is 48 days since he was injured, or six weeks and six days.

High ankle sprains are notoriously tricky injuries, but his recovery has essentially gone down without a hitch.

“He’s been better pretty much every step of the way than maybe can be expected,” Bylsma said.

Naturally, the last few days of the recovery are the toughest.

“Now that you’re getting this close to it, you feel like you can go any day now,” Eichel said. “The patience is starting to wear thin, but you got to make sure you be smart.”

In addition to skating on his own, Eichel has practiced with his teammates four times – three off-day sessions and one morning skate. On Sunday, he participated in more arduous work than Monday, battling with teammates.

“(Sunday) was a bigger test for him … and he responded well to it, came back (Monday) morning feeling good about,” Bylsma said. “His skating’s good. He’s beating guys, stepping off guys, creating room and separation. Looks good to me.”

Eichel said last week he had a return date in mind. Given he hadn’t practiced much, home dates Thursday against the New York Rangers and Saturday against the Boston Bruins seemed like his possible targets.

But if Eichel feels well enough to play, why not let him?

“Who knows what will happen tomorrow night, it’s more than 24 hours away,” Eichel said. “All I can say is I felt good today, I felt good the last few days. I think I’m just getting more comfortable on the ice.”

Teammates have missed some of the comfort Eichel provides away from the rink.

“He’s a joker,” Foligno said. “He’s an easygoing kid. But the best thing is when he plays, he works hard. He brings it. Off (the) ice, dinners and stuff with him, you got comedy for as long as dinner lasts. It’s always a good time with him.”

If Eichel can’t play, the Sabres will recall a forward, Bylsma said.