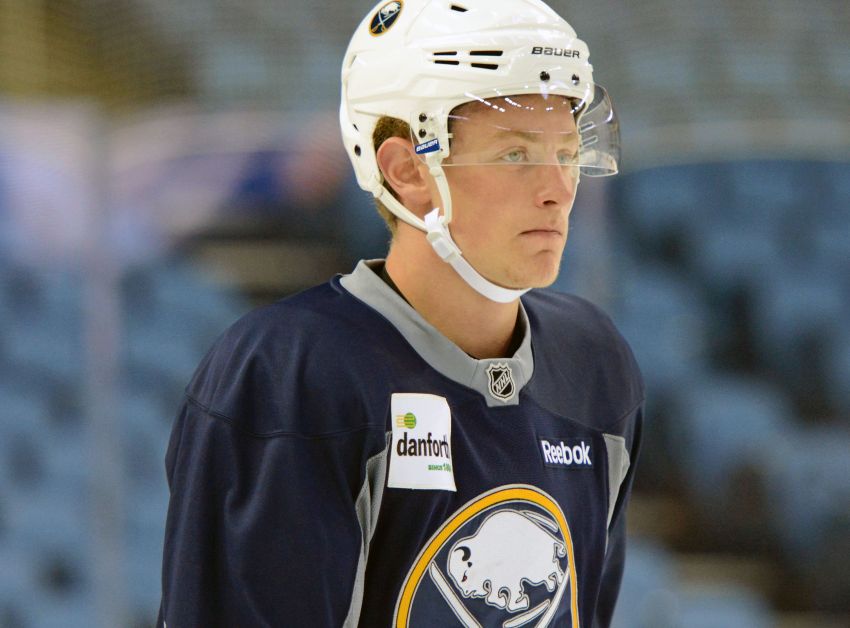 BUFFALO – Given Jack Eichel’s workload so far in practice – the talented Sabres center has only participated in a couple of battle drills and lines rushes – it seems unlikely he could return from a high left ankle sprain Tuesday.

But Eichel, 20, keeps making positive progress. Today inside HarborCenter, Eichel briefly bumped with some teammates and skated beside Evander Kane, his regular left winger late last season, and a couple of right wingers.

“Today was a good test for him in a lot of ways, the speed and the pace of practice and the workload,” Sabres coach Dan Bylsma said. “There was some five-on-five, there was some D-zone coverage, two-on-two battles down low.”

Of course, Eichel, out since Oct. 12, has to ramp up his physical activity before he can make his season debut. He has skated three times with his teammates and participated in two full practices.

Eichel said last week he has a return date in mind. After a road game against the Ottawa Senators on Tuesday, the Sabres host the New York Rangers on Thursday and Eichel’s hometown Boston Bruins on Saturday. One of those home games could be his target.

Kidding aside, Bylsma said Eichel is “starting to get that bug to get back on the ice and play.”

“He did a very good early on tempering his mindset and where he was mentally and knowing it was a six-week injury,” he said. “The last two weeks when he’s moved to skating on a regular basis, he still knows that he was two weeks away. I think in the last five days … you can feel him understand that the day’s coming here very soon in the next little bit.”

In other news, winger Sam Reinhart, Eichel’s regular linemate, had a maintenance day from practice.

The Sabres also recalled winger William Carrier from the Rochester Americans this morning.

“Best player on the ice,” Bylsma said of Carrrier’s play for the Amerks on Saturday.

The Sabres sent Carrier and forwards Cal O’Reilly and Cole Schneider to the AHL on Saturday. They will likely summon at least one more player Monday, Bylsma said.

In other injury news, defenseman Dmitry Kulikov, who has nursed a sore lower back all season, skated on his own before practice for the third time, Bylsma said.