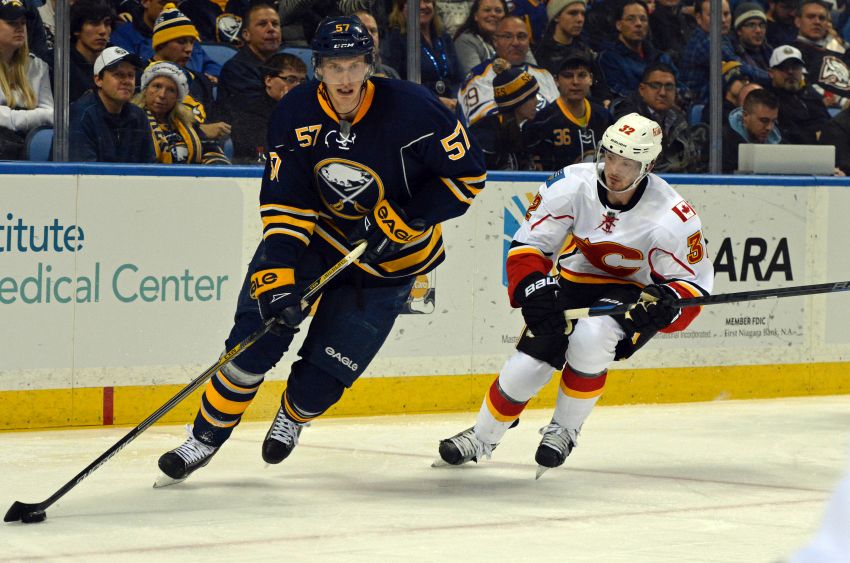 As a struggling veteran months away from free agency last year, Stafford knew the rebuilding Sabres would trade him. Sure enough, Stafford, 30, was dealt with defenseman Tyler Myers on Feb. 11, 2015 in the blockbuster that brought defenseman Zach Bogosian and winger Evander Kane to the Sabres.

“I was kind of expecting something was going to happen,” Stafford said Saturday morning prior to the Jets’ 3-2 loss to the Sabres. “Either way, the direction the team was going, I knew they wanted to make some changes. Obviously, it’s been beneficial for both sides.”

The change of scenery has reignited Stafford’s career, which stalled following a 31-goal campaign five years ago. The 2004 first-round pick has 20 goals in 71 games this season.

Meanwhile, Myers, who’s out for the season, also acclimated to the Jets smoothly. For years, as Myers, 26, struggled to regain his slick rookie form and the Sabres became the NHL’s laughingstock, rumors swirled the 2009-10 Calder Trophy winner would be traded.

“A lot was going on the last two years when I was in Buffalo,” Myers said. “We knew changes were going to be needed to get things going here. When the move happened, I didn’t know what to expect.”

“I grew up in (Calgary), so a lot of similarities with that, in the way of life,” he said. “I’ve really enjoyed my time with Winnipeg.”

Myers underwent knee surgery Thursday. The 2008 first-round pick will have major hip surgery, which requires 16 to 20 weeks of recovery, when his knee heals.

“It’s come to a point where it just needs to be taken care of,” Myers said about his hip, which began bothering him with the Sabres.

Myers accompanied the Jets to Buffalo because he’s visiting a doctor in New York.

“Driving after we landed (Friday) was a weird feeling,” he said. “I hadn’t been here for over a year. It’s definitely different, but it’s good to see some old faces again.”

“I had a lot of really good times here, been a lot of key moments and a lot of people who helped me along the way,” he said. “I’ve seen a lot of those people today. So it was good to catch up with them and see how they’re doing. I’ll always be grateful for that.”

“My son was born here,” he said. “I got a lot of respect for the fans here. Over the years, (I) had some good times and obviously some bad times, too. But it’s good to be back and see a lot of familiar faces.”

Walking into the First Niagara Center as a visitor was “definitely a little weird,” said Stafford, who experienced “the full circle of things” here. He joined the Sabres during their Presidents’ Trophy run and left at the end of their darkest days.

When the Sabres honored Myers and Stafford with a video tribute, Stafford saluted the fans as they cheered and serenaded him with “Dreeewww” chants.

“Unbelievable,” a smiling Nelson said. “Never going to forget it.”

Nelson, 23, earned his first assist on Fasching’s goal by passing to Mark Pysyk in his own zone. As Fasching zoomed to the net, Nelson watched the play unfold on the video board.

Nelson said he slept well prior to the game, but he woke up and “the sweat starting hitting me.” He tried to calm down during the national anthem and finally settled in after the first period.

“He was skating well, distributing well, moving to the middle of the ice … (and) was fine defending,” Bylsma said.

Fasching and Nelson became the first Sabres to record their first point on the same goal since Alexander Mogilny and Dave Snuggerud on Oct. 5, 1989 against the Quebec Nordiques.

Notes: With his third-period goal, center Jack Eichel, 19, became the first Sabres rookie since Derek Plante in 1993-94 to hit the 50-point mark. He’s the youngest since defenseman Phil Housley in 1982-83. … After allowing two goals on the first four shots he faced, Sabres goalie Chad Johnson made 15 straight saves. … Winger Joel Armia, the Sabres’ 2011 first-rounder, played his 36th game with the Jets. The Finn was also part of last year’s trade. He played one game for the Sabres last season.