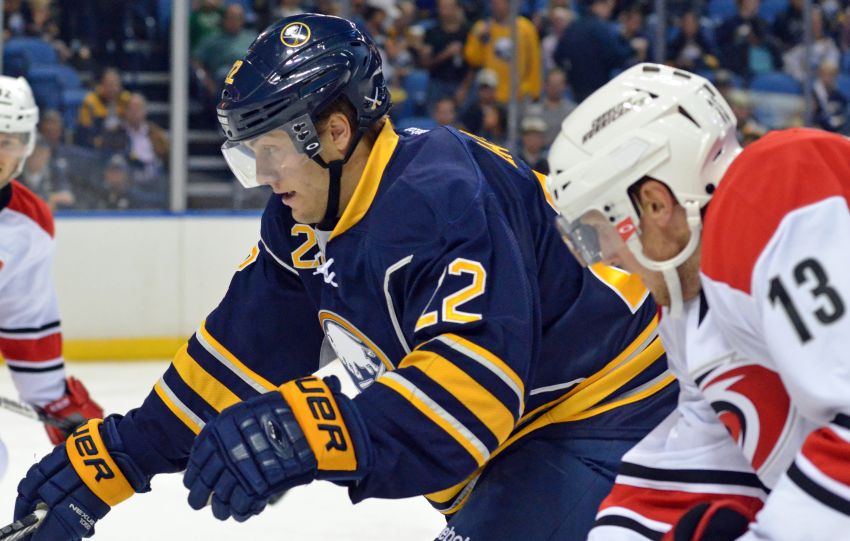 BUFFALO – Right now, the Sabres’ depth down the middle is, well, a bit thin beyond Cody Hodgson.

So what will the Sabres do?

“We’re going to continue to look at all options, whether it’s young, moving guys around – whatever’s going to be the best scenario for the team,” Rolston said Friday after the Sabres prepared tonight’s preseason tilt against the Toronto Maple Leafs at the First Niagara Center.

One of those youngsters, the 21-year-old Larsson, might be forcing his way into the rebuilding Sabres’ opening-night lineup. Considering Larsson’s beginning just his second North American season and has played only one NHL game, the Swede seemed like a longshot just a week ago.

But Larsson has been seizing his chances, impressing Rolston through three exhibition appearances.

If he keeps acquitting himself well, can the Sabres, whose focused has turned to youth, really deny him a roster spot?

After Larsson scored twice while skating 15:51 in Thursday’s 5-2 win over Carolina, Rolston called him “arguably our best forward.”

“He’s strong,” Rolston said about his 5-foot-11, 206-pound prospect. “He’s put together, and that helps him obviously on the ice over pucks. I think for him we’re just going to see him grow here. I think he’s getting more comfortable. (It was) his best game.”

Larsson said he “got some confidence” from Thursday’s performance.

“I think I played pretty good in the other games, too,” he said.

“He’s able to make plays,” Rolston said. “He’s got quick hands. He had a couple (Thursday) he’s able to get across his body quick and get it on net. He’s a smart player. So he’s always in good position to support both ends of things offensively and defensively. I think he’s got a real strong two-way game.”

Larsson added: “I try to be hard to play against and also be creative with the puck, make some plays, be in the scoring areas.”

He was in those areas against Carolina, tipping in two Brayden McNabb shots.

Larsson, the 56th overall pick by Minnesota in 2010, thought he would be competing for a spot with the Wild this season, not the Sabres.

After two years in the Swedish Elite League, Larsson joined Minnesota’s AHL affiliate in Houston last season, scoring 15 goals and 37 points in 62 games. He made his NHL debut Feb. 17 and felt he was part of the Wild’s future.

Then, Minnesota traded Larsson, goalie Matt Hackett and first- and second-round picks to the Sabres for Jason Pominville hours before the April 3 trade deadline.

“I didn’t see that coming,” Larsson said. “But I think all the guys have to be ready for something. The thing was I think I played pretty good there, and then the another day you’re on another team. So it’s kind of weird.”

The Sabres immediately assigned Larsson to Rochester, where he had one goal and seven points in 10 total games.

Bigger prospects – the Sabres’ last four first-round picks all played in Sunday’s preseason opener – have been overshadowing Larsson a bit this training camp.

“I like it. It’s fine with me,” Larsson said. “I know what I’ve got to do to make it. So I only have pressure on myself.”

Grigorenko, one of those recent picks, will definitely be sticking with the Sabres, general manager Darcy Regier has said.

So far, Larsson has outplayed Grigorenko, who has one goal and a shootout score.

“He was really involved, he was one of our better forwards in Columbus (on Tuesday), and then it goes back to the consistency,” Rolston said about Grigorenko’s performance Thursday. “He wasn’t able to put it back-to-back.”

Rolston said either Hackett or Jhonas Enroth will start in goal tonight.