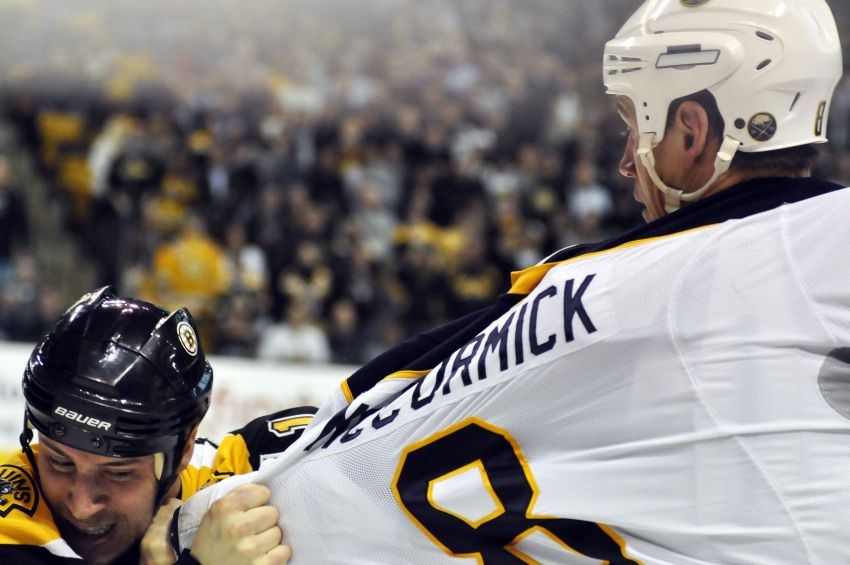 BUFFALO – The cycle repeats nearly every season. Inevitably, gritty Sabres forward Cody McCormick spends each training camp battling and fighting – literally, as he has nine career preseason scraps – for one of the 20 coveted NHL roster spots.

Other than 2011, after McCormick’s career season earned him a new three-year, $3.6 million contract, the versatile 30-year-old has lived the journeyman’s life, never enjoying much comfort prior to a new campaign.

“Every year I’ve gone into a camp I don’t think anybody’s really guaranteed me anything,” McCormick said last week after skating with some teammates inside the Riverside Ice Rink. “So it’s kind of what I’m used to, I guess.”

But the Sabres’ upcoming camp could be a different experience for McCormick, who finished last season with the Rochester Americans after getting waived Feb. 20.

General manager Darcy Regier said in July that McCormick will either be with the Sabres in 2013-14 or somewhere else in the NHL because he likely wouldn’t clear waivers if they tried sending him to the AHL again. McCormick could get traded, Regier said.

McCormick wasn’t aware Regier had said he would probably be in the NHL.

“We had a conversation,” McCormick said. “He was happy with how the playoffs went in Rochester. Going forward, what I like to think is I’m here to try out for a spot on the Sabres, and that’s as much as I know right now.”

Having been waived hours before the Sabres fired Lindy Ruff, McCormick hasn’t played under new coach Ron Rolston yet. Still, as a strong fighter talented enough to skate with any teammate, he might have an inside track for a roster spot. The rebuilding Sabres added no veterans up front this summer.

Star winger Thomas Vanek said last week he would like McCormick and Matt Ellis, another experienced and respected forward jettisoned to the minors last season, to stick with the Sabres.

McCormick impressed during his first trip to the AHL since 2009-10. The 28-game run allowed him to take a regular shift and play key minutes again, which he hadn’t been receiving in Buffalo.

“I had a great time,” he said. “I played in more situations in some games and … (liked) being around the young guys. Being in the playoffs was what you play all season for, train all summer for.”

McCormick said he has “got a lot more hockey in me.”

“You know there’s always somebody watching,” he said. “I just got to come into camp, have a good year and go from there. I’m not thinking about having a great season right away. I’m focused on training camp and going to the next step after that. I don’t look at game 82 and want to reflect on it. I want to look at game No. 1 and go from there.”