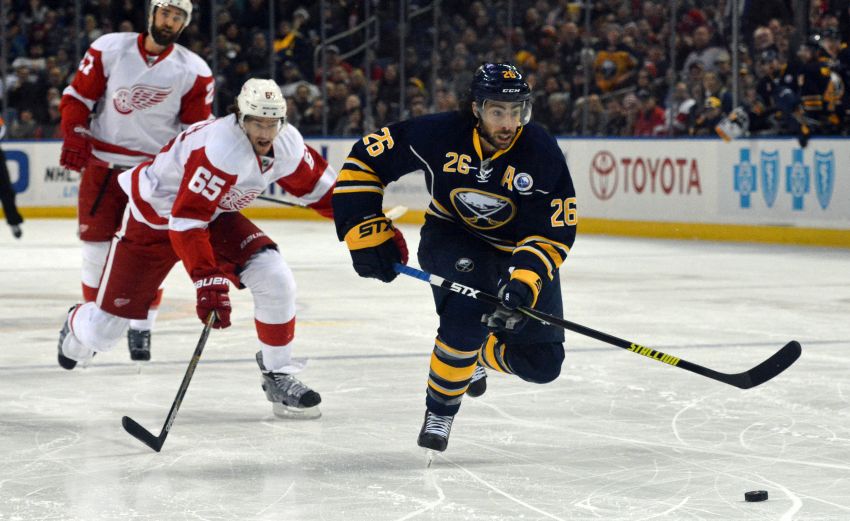 BUFFALO – The joke all season has been the Sabres have one first line and three fourth lines. Right now, even that’s a stretch. No one can score.

The Sabres have only scored nine goals during their eight-game losing streak. They have 76 goals all season entering tonight’s game against the Minnesota Wild, a stunning 1.7 a game.

At that anemic pace, the Sabres would score 141 goals in 82 games, nine fewer than they had last season, when they set the all-time modern record for fewest goals scored in a full campaign.

Their NHL-worst power play has converted only 11 of 122 attempts this season, just 9 percent. No other team is below 13 percent. The league average has only dipped below 16 percent five times since 1963-64.

Assistant coach Bryan Trottier, who scored 524 goals and 1,425 points during an illustrious Hall of Fame career, runs the power play. The Sabres practice it almost daily, perhaps more than any other team.

Still, nothing has changed.

They bobble a lot of pucks. Opponents have scored seven short-handed goals this season.

“You put a big man there, you can draw a little bit more attention than trying to cover him on the point,” Sabres coach Ted Nolan said. “It takes two guys to cover him in front of the net. So maybe that’ll spark our power play a little bit.”

The Sabres haven’t created any sparks during five-on-five play recently. Their top offensive threats are all in huge slumps.

The No. 1 line of Ennis, Moulson and center Zemgus Girgensons has generated little offense in recent weeks. Moulson has zero goals in the last 10 games. Ennis has one score in 16 contests. Girgensons has two goals in 15 contests.

The line, which Nolan briefly broke up recently, racked up points in late November and early December as the Sabres won 10 of 13 games. As a team, the Sabres scored 31 goals on 248 shots in those wins, a healthy 12.5 shooting percentage.

These days, since the Sabres have no secondary scoring, opponents key on Girgensons’ line.

“You look at the line, you have 18, 19 minutes a game on a regular basis, that’s tough to do, and the opposition throws their top defensive pair against them all the time,” Nolan said.

Girgensons, the Sabres’ leading goal scorer with 11, is only 21 years old and 114 games into his career. His slump is easier to explain. Ennis and Moulson are proven scorers, however.

Ennis was scorching before this recent stretch, earning NHL first star honors for his one-goal, five-point week in early December. He has just three points since then.

“He has a high hockey IQ,” Nolan said. “What he was doing before, he could do it because he had other people there to go along with. Right now, he’s kind of the lone guy they can key on. He’s got to move the puck a little bit quicker, dart himself in the hole a little bit quicker and use his hockey intelligence to spread himself free.”

The long slump has worn on Ennis. He looked stunned sitting in his stall following Tuesday’s 3-1 loss to Detroit.

“It’s frustrating when your job is to score,” Ennis said. “I got to score.”

Moulson, meanwhile, has only seven goals and is on pace for a career-low 13. He misfired on a breakaway Tuesday, his best chance in weeks.

“We have to continue to work,” Moulson said about his line. “We have to get back to what we’re good at, being around that net and getting those dirty goals that we were getting before. I think maybe at times (we try to be) a little bit too fancy.”