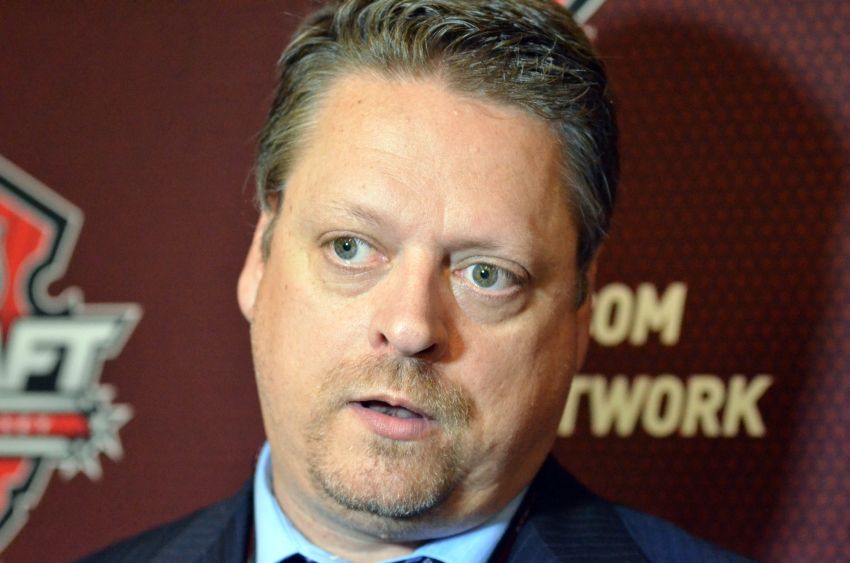 Murray would be leaving what he called “comfortable situation” as the Senators’ assistant GM. The 50-year-old’s from the Ottawa area. His wife and children live there. Many speculated he would replace his uncle someday. At the very least, he acknowledged, he would’ve been a candidate to run his hometown team.

Still, “It didn’t take me long to say yes,” Murray said Thursday upon being introduced as the Sabres’ new GM inside the First Niagara Center.

Why did he pick Murray?

“He knows every facet,” LaFontaine said. “He’s decisive. He’s a team guy. He cares. He’s loyal and respectful and trustworthy.”

He added: “He’s paid his dues. He’s earned this opportunity. He knows organization from every level.”

He noted “the cupboard is not bare.” The Sabres have nine first- and second-round picks over the next two years, a stable of choice prospects, salary cap space and ownership willing to spend freely in all facets.

“A blank slate,” Murray said. “Money to spend when it’s the right time here to be a cap team. This was just an attractive, attractive time for me to branch out on my own and put my stamp on the game of hockey.”

About 10 hours later, Murray’s Sabres fell to the Florida Panthers in 2-1 shootout before 17,872 fans.

“It’s tough to win with this team,” said Sabres goalie Jhonas Enroth, who fell to 1-9-4 despite making 34 saves.

Incredibly, the Sabres have scored 18 goals for Enroth this season.

Murray, meanwhile, has an extensive 21-year career in NHL front offices. But he’s a scout at heart.

“I think the foundation in scouting prepares you for a lot of this job,” Murray said. “I think personality comes into play, decisiveness. Are you will to make tough decisions? I think maybe that was part of Pat’s decision on me. But my background is in scouting (was important).”

Sabres center Zenon Konopka said he knew Murray would be a GM someday after meeting him two years ago playing in Ottawa.

“A great person. A really good hockey mind,” Konopka called him. “I think one of the best things about him is that he has a pulse on everything in the organization. In Ottawa, he understood the players from the young guys to the older guys to the management to the coaches. He’s a real sharp individual, and I think we’re extremely lucky to have him.”

Not surprisingly, Murray believes “you build a team through the draft.”

“Good drafting allows you to trade well, and then you use free agency to put you over the top,” he said.

What will Murray do?

“I can’t go out right now and tell you I’m going to trade all the pending UFAs if there’s no market to trade them,” he said. “If there’s a market and it makes sense, this team’s in last place right now, everybody can be traded. It has to make sense. You don’t just make trades for me to come in here and show you guys that I’m active and I think I’m smart.”

Miller’s future could become the talk of the league. The franchise netminder, who didn’t speak to the media Thursday, said last month he wanted actions, not words, from the Sabres.

“The most important thing to do is listen to what Ryan Miller wants to do,” LaFontaine said. “Obviously, we’ve love to keep a great goalie like that who knows Buffalo. Everybody loves him here.

Murray will have help as a rookie GM. The Sabres also introduced Craig Patrick, a Hockey Hall of Famer and two-time Stanley Cup champion as Pittsburgh’s GM, as a special assistant and advisor to the hockey department.

“He’s got the experience,” LaFontaine said. “He’s won Stanley Cups. He’s gone through rebuilds. I think that experience is going to be tremendously valuable through this experience.”

LaFontaine said he asked Patrick, a member of USA’s 1980 Miracle on Ice coaching staff, why he wanted to get involved with the Sabres.

“He looked me right in the eye and said, ‘Because I know I have two more Stanley Cups,’” LaFontaine said. “He said, ‘I’m not done.’ And when a Hall of Famer, a guy who’s done what he’s done, gold medal, Olympics, looks at you, he wants to help.”