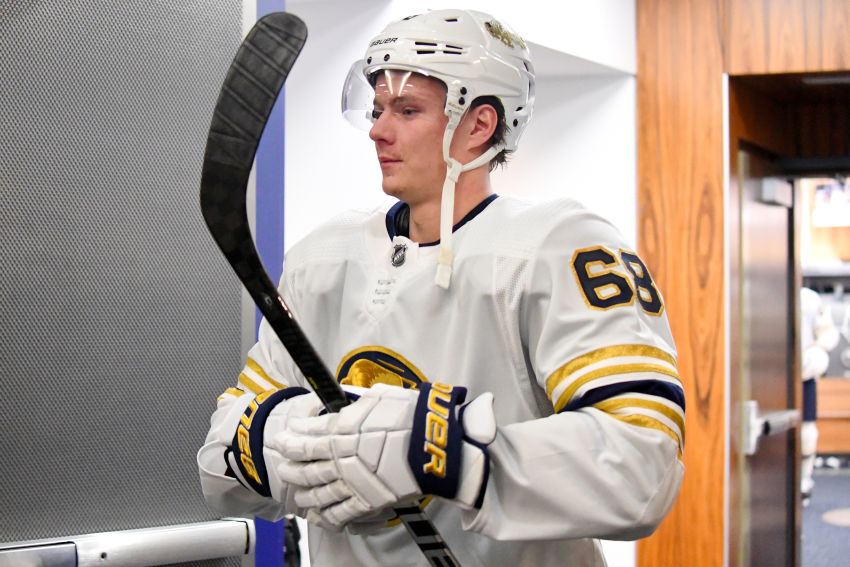 “We did not play too well together,” Reinhart acknowledged on a Zoom call last week. “Maybe the first couple we played well, and then (Olofsson) actually moved away from us for a game or two.”

When Krueger moved Olofsson back to the top left-wing position, the Swede’s quick transformation stunned Reinhart. Olofsson, for example, started playing more aggressively. In a matter of days, he had made the adjustments necessary to entrench himself on the Sabres’ No. 1 line.

“What shocked me and surprised me and really impressed me was how really quickly he learned,” Reinhart said. “His smarts kind of played out and he realized kind of what he needed to do to be that much more effective, and when he came back, obviously he took off.”

Right away, Olofsson’s lethal shot helped establish him as a Calder Trophy candidate. Stationed in the circle on the power play, he consistently utilized his ultra-quick release, becoming a favorite target of Eichel and others.

“Everyone talks about his shot,” Reinhart said. “It’s in our opinion, (the) top five in the league, and I got no question on that, maybe even the best release.”

But opponents caught up to 5-foot-11, 183-pound Olofsson and started zeroing in on him. As the season progressed, he couldn’t unleash the puck as easily as he had earlier.

The Sabres’ power play became feeble, falling to 20th in the NHL. Olofsson, meanwhile, scored only four times on the man advantage in his final 47 games.

“I feel like the biggest adjustment they did was on the power play,” Olofsson said on a Zoom call last week. “I probably didn’t get as much space and time to get my shot off. Maybe they played me a little bit harder the longer the year went on, too, which is, I feel like it’s kind of natural.”

Olofsson’s scorching start overshadowed his early scoring struggles five-on-five. He finally got going Nov. 9, scoring the first of his nine even-strength goals in his 17th appearance.

His smarts and ability to adapt, as Reinhart noticed, have helped him thrive in three leagues – the NHL, AHL and Swedish Hockey League – in the last three seasons.

“I’ve experienced that throughout my career, since I first came up in the SHL, and then the same thing happened in the American League,” Olofsson said of teams keying on him. “So it’s something I’m used to. I feel like it doesn’t really bother my game at all. You just kind of find solutions and think a little bit differently sometimes maybe.”

Eichel said: “His hockey IQ is very good. He understands the game. I think that allows him to play really at any level.”

After scoring an SHL-high 27 goals in 50 games in 2017-18, Olofsson scored 30 times in 66 contests as a rookie with the Rochester Americans last season and twice in six late-season appearances in Buffalo.

“He is a bonafide goal scorer who will have to continue to round out his game at five-on-five, both offensively and defensively,” said one scout who has watched Olofsson throughout his North American career. “But he does have the knack of finding the soft ice or open ice in the offensive zone. If he plays with someone who can get him the puck, he could turn out to be a prolific goal scorer.

“(He) still needs to add some strength and power to insure continued growth.”

“I felt like I have the skills and the capability of scoring in the National Hockey League,” he said.

Still, Olofsson understands he must do more if he wants to develop into an elite talent.

“The tough part is to kind of be consistent in doing it over a full season,” he said. “I think that’s something I got to learn, just to be on a high level and be a threat all the time throughout an 82-game season. I think that’s going to be the biggest capability for me, because I feel like I have the capability of scoring a lot of goals.”

Olofsson also has the capability to score a big contract. As a restricted free agent this offseason, he will earn a significant raise from the $700,000 base salary he received as a rookie.

“I feel like I can hopefully transfer that right into next year and build on it. I think I have a lot more work to do before I consider myself a really good NHL player.”