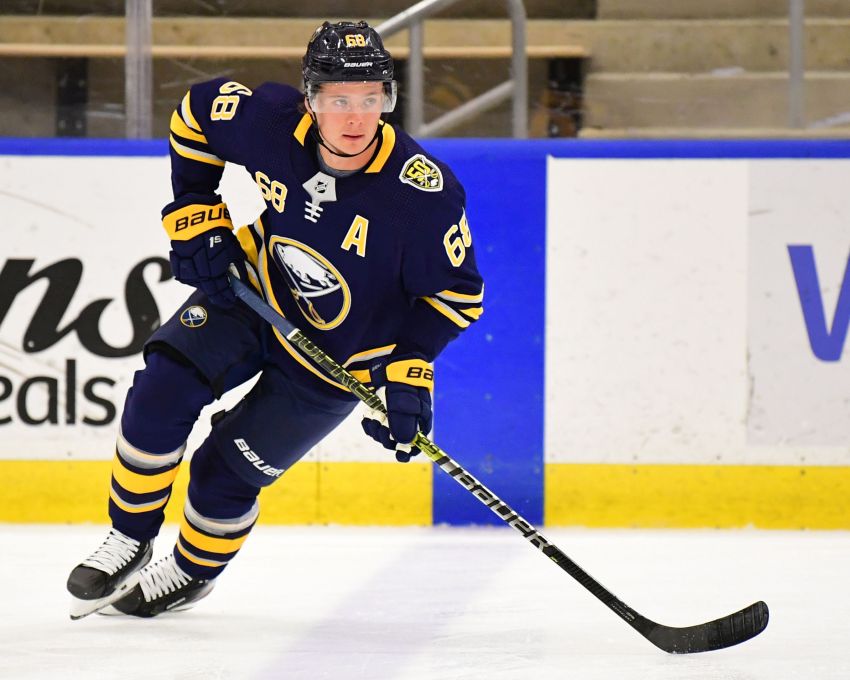 Victor Olofsson has roared out of the gate. ©2019, Hickling Images

It was training camp in 2018, and Olofsson had just arrived for his first North American season after leading the Swedish Hockey League in goals.

What Okposo and the others saw wowed them.

“We were just like, ‘Who is this kid who can shoot the puck like this?’” Okposo said Thursday inside KeyBank Center. “You always hear that he was going to come up here and score goals, and he has.”

The same player who lasted until the 181st pick in the 2014 NHL Draft has scored four power-play goals in the last three games and owns a spot on the left wing beside No. 1 center Jack Eichel and Sam Reinhart.

Dating back to last season, Olofsson has scored his first six NHL goals on the power play, a record he shares with three others.

He could become the first Sabres rookie to score in four straight games since Donald Audette scored in five consecutive from Nov. 8 to 20, 1991.

A Sabres rookie hasn’t started a season this hot since 2011-12, when center Luke Adam scored three goals and six points in the first four games.

Olofsson has looked dynamic in and around the faceoffs circles, utilizing his lethal wrist shot to beat goalies.

“One of the best releases I’ve ever seen,” Okposo said.

“The quickness, accuracy, the speed of the shot,” Okposo said of what makes it so good. “He shoots … with his hands really close together and really in tight, and that’s something that’s really tough to do and get velocity on it.”

The presence of his parents, Maria and Tony, made Olofsson’s goal in Wednesday’s 5-4 overtime win against the Montreal Canadiens especially meaningful.

The Olofssons, who will also be at tonight’s game, hadn’t seen their son play for the Sabres in person.

“It’s obviously a dream for me to play in the NHL, and I think been kind of a dream for them as well supporting me through the years,” Olofsson said. “It was very special to have them here and watching me play.”

Olofsson knows he can play a lot better five-on-five. Other than his assist on defenseman Rasmus Dahlin’s goal opening night, he has done all his scoring on the power play.

Olofsson knows he has been too one-dimensional.

“(I need to) win some more battles down low and win more pucks on my own and create scoring chances on my own,” Olofsson said of his even-strength play. “You don’t always have to get that perfect pass from Jack or Sam to get a scoring opportunity.”

Olofsson developed a strong two-way game in the AHL last season. In addition to scoring 30 goals with the Rochester Americans, he earned time killing penalties, an opportunity he called a big step in his career.

“Throughout training camp and on the way to playing the role he has been playing here, his game away from the puck and his decisions and energy and his speed coming back and tracking into our end has been elite,” Krueger said. “So the foundation is there. What you’re going to see in a player at that experience level is, if he does get a little fatigued, he will wander maybe a little outside of that area.

“It’s just getting used to the pace of the NHL and the amount of games and keeping your mind in focus because the instincts with him will be offensive.

“The other part he’s learning and growing, but the attitude is correct. He’s been an outstanding player in both directions since the beginning of camp.”