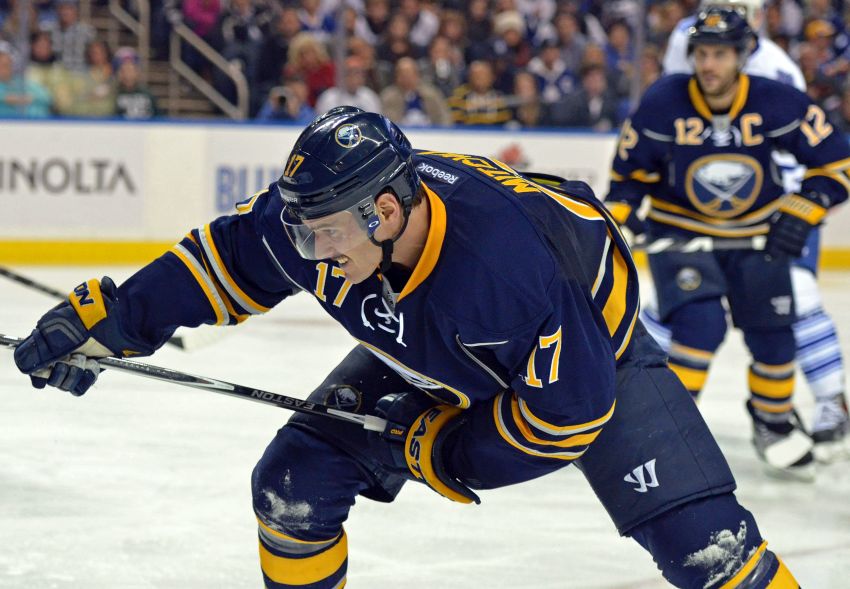 Mitchell’s outing, of course, wasn’t as gutsy or memorable as the time Baun scored an overtime winner in the Stanley Cup final on a broken leg 50 years ago.

Still, given the way Mitchell had hobbled off the ice minutes earlier, it qualified as unlikely. Nolan thought the worst when teammate Rasmus Ristolainen’s slap shot hit Mitchell squarely on the back of the left foot.

“Honestly, it really hurt,” Mitchell said Tuesday inside the First Niagara Center after the Sabres prepared for tonight’s game against the Winnipeg Jets.

Mitchell simply walked the injury off in the hallway and returned moments later. It swelled up after the game. He’s fine, however.

“Friendly fire,” Mitchell joked. “It was all good.”

Mitchell and his wingers, Brian Flynn and captain Brian Gionta, have all been good recently. The trio has quietly become the No. 2 line and helped buoy the Sabres to a three-game winning streak. The team hasn’t won four consecutive games since a five-game streak in March 2012.

“I’m trying to support them as a centerman all over the ice. It’s just been the simple little plays, those little details, that we’ve been good on, that created offense for us.”

Flynn and Gionta both scored in last Tuesday’s 4-1 win against San Jose.

“I’d say we’re more of a checking line, but the last couple games we’ve been able to put the puck in the net,” Mitchell said. “That’s a big plus, and that creates a lot of momentum.”

Hard work created the goals. Gionta and Flynn scored after the line outworked the Sharks in the Buffalo zone. A strong forecheck against the Capitals led to Mitchell’s score.

Mitchell believes the linemates “sort of have the same mentality.”

“We’re all hardworking guys, (play a) simple game, try to work whoever we’re out there against,” he said. “It’s been working for us the last week or so.”

Nolan added: “Three hardworking guys that read and react off each other. Three intelligent men to begin with. They study their craft, and their character really steps to the forefront.”

Gionta said the line always stays on the right side of the puck. Whether or not they’re scoring, the trio does “the same things game in and game out,” he said.

“There’s that level of comfort with each other knowing where we’re going to be,” Gionta said.

Mitchell, who scored a career-high 10 goals as a rookie in 2007-08, hasn’t felt this comfortable in a long time. The speedy 29-year-old, part of last season’s Matt Moulson trade with Minnesota, is one of the Sabres’ biggest surprises.

He already has three goals in 21 games, one more than he had in 67 appearances last year. His versatility – he can play center and winger – has helped, too.

“At least the last couple years, I’d say this is the most confidence I’ve had,” Mitchell said. “When I signed with Minnesota as a free agent (in 2012), I was pegged more of in a fourth-line role, so I wasn’t getting the ice time that I wanted. When I got traded here, I got an opportunity. I feel like I’m taking advantage of it.”

Flynn, a healthy scratch nine of the first 11 games, has also taken advantage of his opportunity. Top prospect Sam Reinhart’s assignment to junior earlier this month opened up a spot for the 26-year-old.

Now, it’s hard to imagine him leaving the lineup.