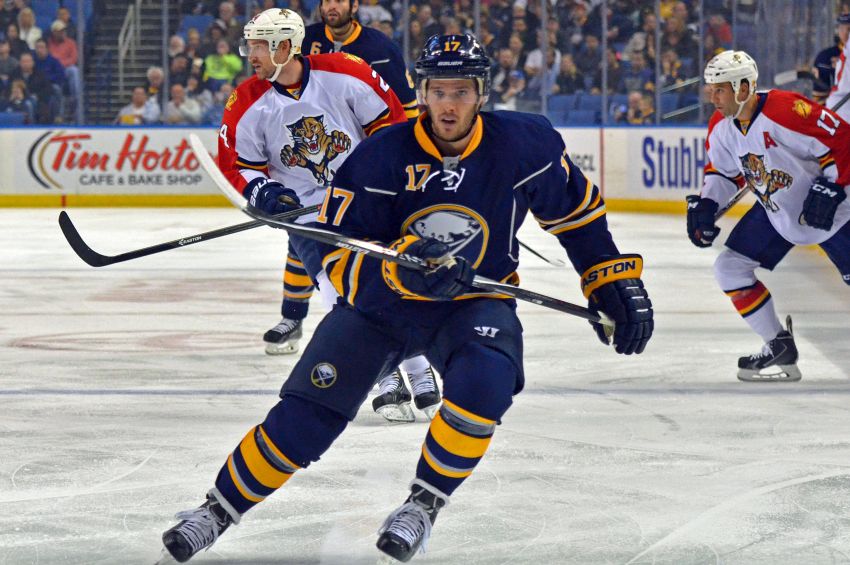 BUFFALO – Despite having some of the best wheels on the Sabres, speedy winger Torrey Mitchell showcases a simple, straightforward style as a third- or fourth-liner.

The 29-year-old is a no-frills checker.

“I try not to do too much,” Mitchell said Friday prior to the Sabres’ 1-0 loss to the Florida Panthers inside the First Niagara Center.

Mitchell, of course, was talking about knowing his limitations. While the Quebec native moves quickly, he’s not a goal scorer.

He scored in Tuesday’s 4-3 shootout win in Carolina, his second goal in five games going back to last season’s finale. But Mitchell only had two goals in his previous 71 contests. He has 38 in 397 NHL appearances.

Mitchell, part of the March 5 trade that sent Matt Moulson to Minnesota, has carved out an eight-year career by embracing his role.

“Sometimes when you simplify things, you’re more effective,” Mitchell said. “Obviously, I play a pretty simple game. Trying not to do anything fancy out there is a big part of my game. It works for me. I’ve been doing it for years.”

Three weeks ago, Mitchell was on the bubble, fighting with about five other forwards for a roster spot. On Friday, he played his second game at left wing beside center Zemgus Girgensons and captain Brian Gionta.

“A good part of my game is speed, and those two guys are quick players,” Mitchell said. “I can keep up with them and create turnovers on the forecheck and just create energy.”

“I have confidence in my game right now,” Mitchell said. “I felt good. I felt like I had a good training camp and a good preseason.”

“So he’s bringing that, and his confidence seems to be growing by the minute, too,” Nolan said. “So now if he gets himself in a position and throws some pucks at the net, you never know what’s going to happen.”

“I think I can fill a lot of roles,” Mitchell said. “I’m not a big goal scorer by any means, but my speed can help on any line, I think.”

Naturally, Sabres center Sam Reinhart, the No. 2 pick in June, wanted to play against Panthers defenseman Aaron Ekblad, the No. 1 pick.

The top two selections don’t have much of a rivalry, though.

The two once roomed together at a Team Canada event. They also got to know each other well leading up to the draft. The friends share a respect for each other.

The first two picks from the most recent draft hadn’t faced each other this early in a season since Joe Thornton and Patrick Marleau met Oct. 11, 1997.

Notes: Sabres defenseman Andrej Meszaros returned from a one-game benching, so Tyson Strachan was scratched for the fourth time this season. … Sabres center Cody Hodgson on going back to the middle after a stint at left wing: “I’ll play anywhere, anytime. It’s just different looks, different dynamic.” Hodgson also manned a point on a power-play unit Friday. … Panthers goalie Robert Luongo also blanked the Sabres a year ago to the day with Vancouver.