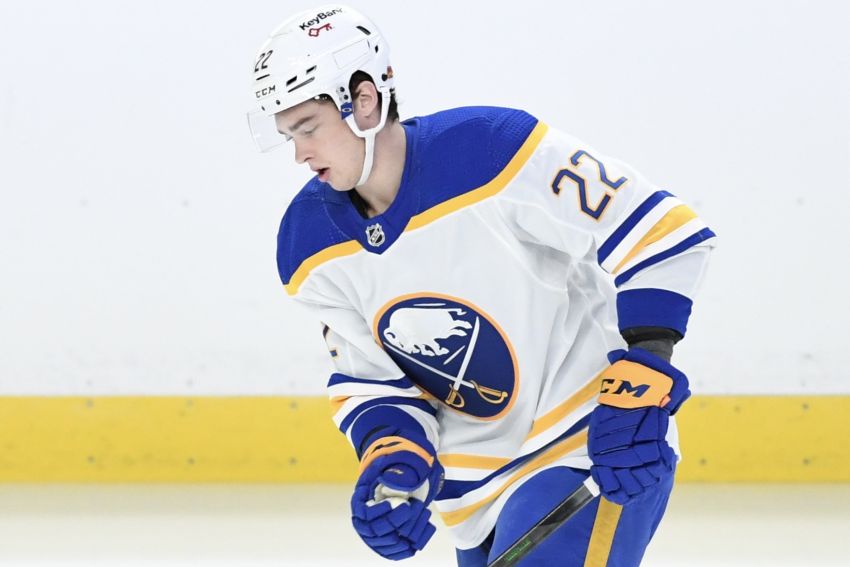 BUFFALO – In a year or two, after  wingers J-J Peterka and Jack Quinn acclimate to pro hockey, they could flank center Dylan Cozens on the Sabres’ No. 1 trio.

But right now, the intriguing line is simply an experiment for tonight’s preseason opener in Columbus against the Blue Jackets. Instead of putting the talented youngsters beside veterans, Sabres coach Don Granato wants them to learn on their own.

While Cozens, 20, played 41 NHL games as a rookie last season, Peterka, 19, and Quinn, 20, will be making their preseason debuts.

“It’s exciting to think we have three very talented, young players like that in our organization,” Granato said this morning inside KeyBank Center. “And I say talented and skilled, not yet experienced. They’re just going to gain experience in every situation. … There’s certainly things they can do from a skill standpoint.

By putting them together, Granato said “there’s nobody to bail them out for their mistakes tonight.”

Quinn, the eighth overall pick last year, switched to center late last season with the Rochester Americans and remained there during rookie camp. He likes the idea of playing his first NHL preseason game as a winger.

“I’ve played a little more wing than center in the past year, so a little more comfortable there maybe,” Quinn said. “So I think it’s a good thing I’m starting there tonight.”

Having spent the last two seasons against men in Germany and Austria, Peterka has played 84 games as a pro, the most of the group. In North America, he’s learning his skills can only take him so far. He must develop better habits.

“There’s lots of details that he hasn’t had to pay attention too, quite honestly,” Granato said. “It’s good that he’s played in a men’s league overseas. That’s helped and shortened his window adapting to the NHL whenever that is. It’s made it sooner than later I think when you’ve gone through that.

“For all of these guys, the highest end skill, they’re not held accountable at the lower levels. They just get by on their skill, so they don’t have to pay attention to any details and that’s a big part of the process once they try to enter the league. For him, he does have an awareness that, ‘OK, I’m going to have to catch (that).’ There’s a consciousness there of, ‘OK, what do I have to adapt to?’ The games like tonight are important for a guy like that.”

In other news, Granato said goalie Aaron Dell will be starting tonight and be relieved by Dustin Tokarski halfway through the game.

Will Butcher and Ethan Prow