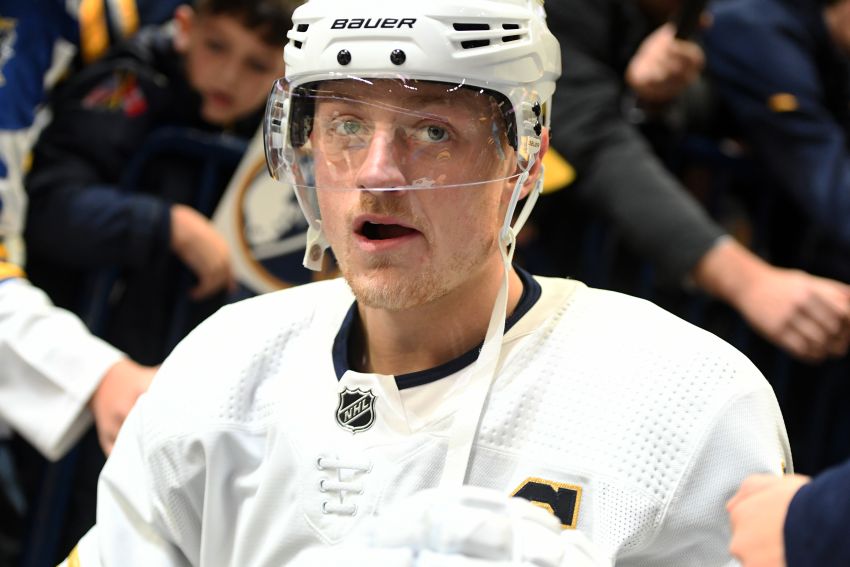 “I cut into my sleep,” Krueger joked today inside KeyBank Center.

Of course, Krueger, who said he has become as a big a Bills fan as anybody, was happy he could enjoy such a significant game. He said he had already send his congratulations to Bills coach Sean McDermott and owners Terry and Kim Pegula.

Krueger isn’t along in his fandom.

Sabres captain Jack Eichel, who grew up a New England Patriots fan, proudly sported a Bills hat in the dressing room following today’s practice. So did defenseman Jake McCabe. Winger Kyle Okposo, who grew up in St. Paul and recently started living year-round in Clarence, said he was “really, really pumped” the Bills made the postseason.

“We’ve become die-hard Bills fans in our house,” he said.

Naturally, the Sabres understand what the Bills’ success means to the community.

Krueger said he and McDermott often exchange texts and are “always giving each other some kind of a push.”

“Both of us are out here trying to make the Buffalo sports community proud,” he said. “They’ve really, really done that in what they’ve achieved.”

The Sabres, who currently stand second in the Atlantic Division, see parallels between what the Bills have accomplished and what they want to do.

“I heard them in some interviews yesterday using the word ‘connected,’ which is all what we’re about,” said Krueger, who installed a sign above the dressing room door before the season that says “play connected.”

Eichel said he can see the Bills’ identity.

“When you look at their group and you look at each guy through the roster, it really stands out how much the team means to them,” he said. “They’ve obviously identified their strengths and they really play to them. I mean, their defense is tremendous, they take care of the football, they run, they do all the little things well. It adds up to wins.

“Ten wins in the NFL isn’t easy. They’ve just had a tremendous season. You can’t say enough good things about them.”

Eichel said “football has a lot of similarities to hockey.”

Before Sabres general manager Jason Botterill spoke to the media Monday, he congratulated GM Brandon Beane and the Bills on their season.

Eichel, who’s enjoying a 16-game point streak entering Tuesday’s game against the Maple Leafs, has been named the NHL’s third star for the week ending Dec. 15.

The center compiled five goals and six points in three games as the Sabres went 2-0-1 and moved into second place in the Atlantic Division.

Botterill on Sabres defenseman Zach Bogosian, who reportedly requested a trade last week after being a healthy scratch: “I’ve been consistent with this: My conversations with the players is going to stay between the players and myself.

“All that I’ll say is we’re ecstatic that Zach is back within our lineup now. He worked extremely hard coming off the (hip) surgery. He’s added another dynamic to our back end there. You look at when he’s out there on our PK and just his physical presence, it’s another point of helping out our group here.”

Bogosian, 29, has been scratched the last two games.