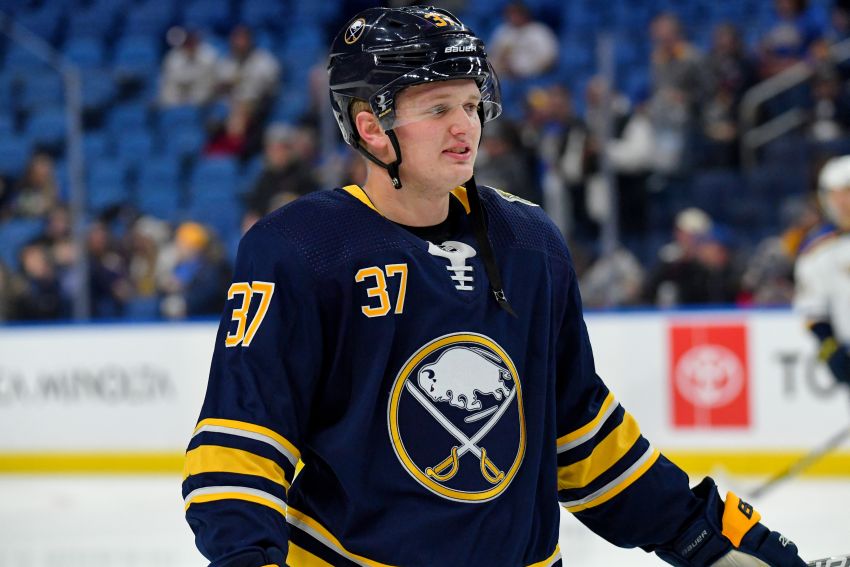 Casey Mittelstadt has never played in the AHL. ©2019, Micheline Veluvolu

BUFFALO – On Sunday, a day off for the Sabres, general manager Jason Botterill and coach Ralph Krueger summoned center Casey Mittelstadt to KeyBank Center to inform him he was being demoted.

After Mittelstadt, 21, got over the initial shock and disappointment of getting sent to the Rochester Americans for the first time, Botterill said the youngster quickly asked what he must to do return to the NHL.

“He is a mature guy, he is a realist,” Sabres winger Kyle Okposo said. “I think he’s able to look at the situation objectively and probably think that it might be best for his development to go down there. So I think that that definitely helps, his ability to step back and look at things in a bigger picture.”

Botterill said: “What I liked was his initial respect for the American Hockey League level and the excitement of going and playing.”

Mittelstadt, the eighth overall pick in 2017, has endured a rough season, struggling to produce offense while looking raw defensively.

After sitting out three of the last four games as a healthy scratch, the Sabres decided he needed to play games.

“That’s the single most important thing here at that age is to get the reps and to get the minutes,” Krueger said. “As soon as he became a candidate for getting scratched, we needed to think about what was the best for him as an individual combined with that, which we need as a team long-term.”

Botterill wouldn’t put a timetable on how long Mittelstadt, who has played 114 NHL games, could stay in the AHL.

Joining the Amerks reunites Mittelstadt with coach Chris Taylor, who subbed as an assistant in Buffalo earlier this season.

“Casey has the opportunity now in Rochester with a little more time and space to work on these things and to get more reps, more minutes to continue to work on his habits,” Krueger said. “He’s a very young player, there’s a lot we ask for for somebody who’s eventually going to be an important piece of our team as a centerman in the National Hockey League. We just all found for his development this is the right place to be.

“Chris Taylor was with him here for a few months, also working with him one-on-one quite a bit, so he can continue the conversation, and that’s the situation. We’re all open, we’re honest when we made the move.”

Mittelstadt has mustered just one goal and two points in his last 21 contests and endured a 16-game goal drought before scoring Nov. 29. Overall, he has compiled only four goals, nine points and a minus-5 rating in 31 games this season.

He joined the Sabres in March 2018 after his freshman season at the University of Minnesota ended. He compiled 12 goals and 25 points and a minus-19 rating in 77 games as a rookie last season.

In other news, scorching Sabres captain Jack Eichel, who’s enjoying a 16-game point streak, has been named the NHL’s third star for the week ending Dec. 15.

Eichel compiled five goals and six points in three games as the Sabres went 2-0-1 and moved into second place in the Atlantic Division.

Listen to my podcast here with @martybiron43 on Buffalo sports momentum, Jack Eichel’s hot season, Tre White’s goalie skills, if the Sabres can sustain success and more: https://t.co/9Cv9xf9lCr. Thanks to @Vinciguerra_CG. @BillHoppeNHL @ByMHarrington