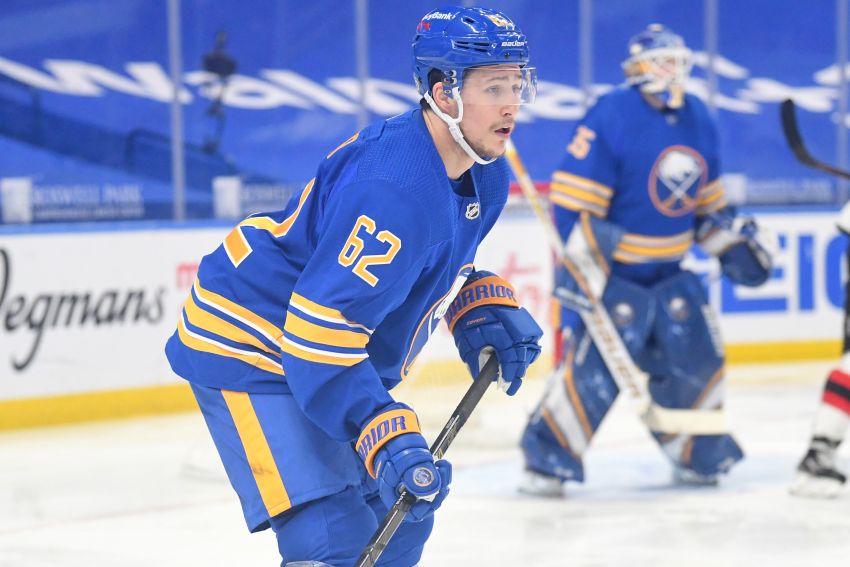 BUFFALO – The Sabres this afternoon made their first trade before Monday’s deadline, dealing defenseman Brandon Montour to the Florida Panthers in exchange for a third-round pick in 2021.

At the end of this afternoon’s practice inside KeyBank Center, Montour, who did not skate, said goodbye to his teammates from the bench.

Montour, who turns 27 on Sunday, has registered five goals, 14 points and a minus-13 rating in 38 games this season. He signed a one-year, $3.85 million contract before the season and can become an unrestricted free agent this summer.

“He was a lot of fun to be around,” interim Sabres coach Don Granato said this afternoon on a Zoom call. “He’s competitive, brings a lot of energy, a lot of life. As you guys have come to know, he’s a high-character guy. So we knew this was a possibility, obviously, his contract status and where we’re at. No surprise for the players and the guys.”

Granato said Montour “was incredible” leading up to the trade.

“He played hard last night,” he said. “He kept this out of his mind when the puck dropped. I say that even in practice and the meetings, he was a true pro.”

The Panthers, one of the NHL’s biggest surprises, rank third in the Central Division, just one point behind the first-place Carolina Hurricanes.

Montour’s acquisition prior to the 2018-19 deadline was significant. Ex-Sabres general manager Jason Botterill traded defense prospect Brendan Guhle and a first-round pick to the Anaheim Ducks to acquire Montour.

For the first time in years, instead of selling off assets, the Sabres made a deadline move to help them immediately.

But the Sabres never sniffed the playoffs over Montour’s two-plus years. Meanwhile, he battled injuries and struggled, recording 13 goals and 42 points 112 games with the Sabres.

By earlier this season, as the hapless Sabres fell to the bottom of the league again, it was clear general manager Kevyn Adams would deal Montour before the deadline.

Meanwhile, winger Taylor Hall, who has been held out of the last three games, practiced with the Sabres. Hall, 29, will almost certainly be dealt in the next two days.

The Sabres have been scratching Hall to protect an asset. Granato said Hall will sit out Sunday afternoon’s road game against the Philadelphia Flyers.

In other news, Sabres center Dylan Cozens practiced this afternoon for the first time since suffering an upper-body injury March 29. The rookie has missed the last six games.