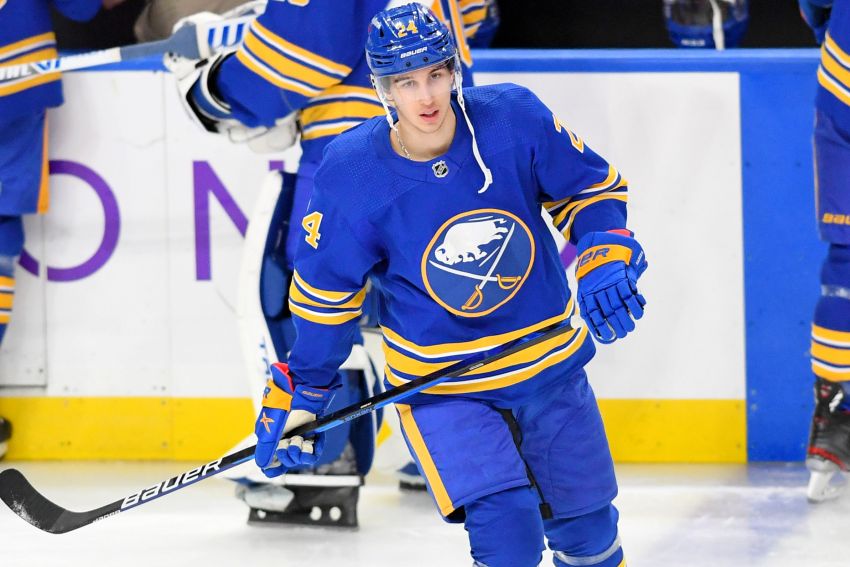 Dylan Cozens has looked comfortable in the NHL. ©2021, Micheline Veluvolu

For almost two months, the Buffalo Sabres eased rookie Dylan Cozens into the NHL by playing him at right wing instead of center, his natural position.

Cozens, 20, kept seizing his opportunities, moving up the lineup and becoming one coach Ralph Krueger’s most trusted forwards just weeks into his career.

So when the upper-body injury captain Jack Eichel suffered Sunday afternoon kept him from playing Tuesday, instead of promoting a veteran, Krueger tabbed Cozens to center the first line.

Cozens pivoted Taylor Hall and Sam Reinhart in the Sabres’ 5-4 shootout loss to the Philadelphia Flyers, recording an assist on Reinhart’s first-period goal. It was just Cozens’ 19th NHL appearance.

The Yukon native’s’ maturity and rapid growth have wowed Krueger.

“He’s just permanently on our confirmer videos that we show the team,” Krueger said on a Zoom call Tuesday morning. “He shows up all the time. He has the right angle, he anticipates his defensive responsibility so well and he also makes plays which we need to do right now. Our five-on-five offense needs to be better on transition, we need to create more opportunity, and he’s got the speed and the vision to be able to do that.”

Krueger said following Tuesday’s game inside Wells Fargo Center that Eichel had returned to Buffalo and will be out a minimum of a week.

Eichel appeared to hurt his neck when Casey Cizikas hit him into the glass behind the net late in the Sabres’ 5-2 loss to the New York Islanders. The NBC broadcast showed him in discomfort on the bench moments later.

This season has quickly become roughest of Eichel’s six-year career. The Sabres have imploded, losing seven straight games entering Tuesday and falling to last in the league.

Eichel, meanwhile, has battled injuries and struggled to produce offense.

An upper-body injury sidelined him early in training camp. A lower-body injury cost him two games late last month. Krueger moved up fourth-liners Curtis Lazar and Riley Sheahan to replace him then.

Eichel has compiled just two goals and 18 points in 21 games. Still, he’s the Sabres’ most talented player and offensive catalyst.

If they don’t score often with Eichel – they have the league’s worst five-on-five offense – what could happen to their feeble offense without him?

Krueger said Eichel’s absence “doesn’t eat away at the morale because we focus on who is here, who’s healthy, what our lineup is and how we can get the best game out of this group.”

If Eichel misses an extended period of time, Cozens, the seventh overall pick in 2019, could stick at center. He will almost certainly be moved there permanently someday.

Why not do it now? The Sabres have nothing to lose.

“I knew coming into the league that I was probably going to start on the wing and I was fine with that,” Cozens said. “I’ve played lots of center and wing throughout my whole career so I’m comfortable in both spots.”

“Dylan is extremely responsible without the puck and even as a winger he often ended up in the D zone, our low man, and he did a really good job with it,” Krueger said.

Krueger promoted Cozens, the seventh overall pick in 2019, to the No. 1 line beside Eichel and Taylor Hall for Sunday’s 5-2 loss to the New York Islanders.

“We like the look of the synergy that Taylor Hall and Dylan Cozens have been having,” Krueger said. “They seem to be finding each other really well. I find that Sam also has the potential to take draws and play some center for us if necessary.”

Cozens said the chemistry he shares with Hall comes from their skating.

“He comes over to my side, supports me, and then I’ll support him on the other side, and just our speed going up the ice is huge for supporting each other,” said Cozens, who played a career-high 17 minutes, 54 seconds on Sunday.

Cozens has scored three goals and five points this season.

“We’re just going step by step but he’s definitely still a few weeks away from any intensive puck play or on the ice with full equipment,” he said.

The Sabres recalled defenseman Henri Jokiharju from the taxi squad before Tuesday’s game and sent defenseman Brandon Davidson back to the practice group.

Jokiharju, who sat out the last two games, played beside Rasmus Dahlin.

Sheahan returned against the Flyers after getting scratched Sunday for the first time this season.

The veteran scored his third goal 9:39 into the game. He skated at right wing on the second line beside center Eric Staal and Victor Olofsson.

One thought on “Fast development earns Sabres’ Dylan Cozens promotion to No. 1 center”