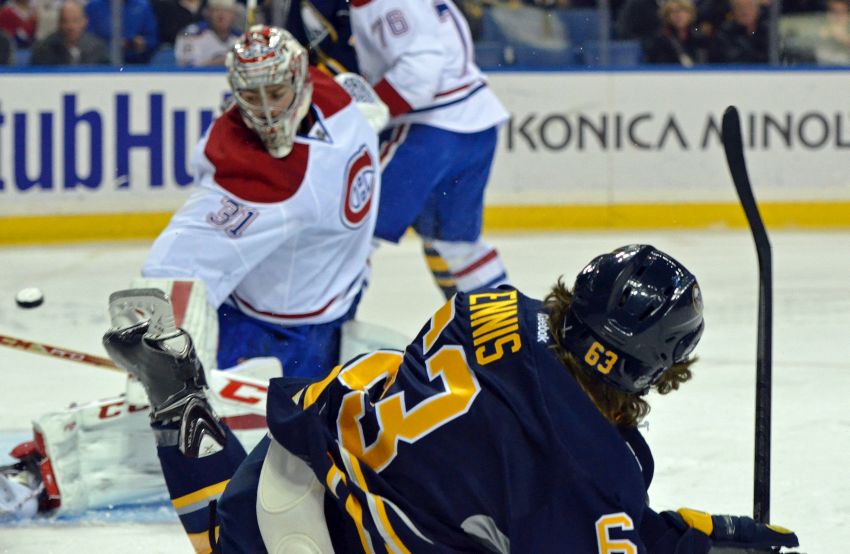 BUFFALO – One Sabres goal was scintillating, the kind destined to become a highlight-reel staple. The other goal was, well, pure luck, a rare bounce off the glass.

“That’s the way hockey goes,” winger Tyler Ennis, whose slick goal opened the scoring, said Friday following the Sabres’ 2-1 win against the Montreal Canadiens. “It doesn’t matter how it goes in, as long as we get the win we’re happy.”

The Sabres were a happy bunch following their fourth win in five games. Finally, more than a quarter into the season, they’re building some momentum.

Friday’s triumph before a bipartisan capacity crowd of 19,070 fans inside the First Niagara Center was arguably the best of the Sabres’ seven victories this season. The Canadiens began Friday first overall with 33 points.

“I’m really liking our resiliency lately,” Ennis said. “We’re coming from behind. We’re scoring late to win games. The last two weeks have been really good for us. That was a big win for us.”

The luck that helped buoy the Sabres was non-existent just a few weeks ago. But late in the third period, with Alexei Yemelin off for hitting Sabres captain Brian Gionta in the head, Ennis shot the puck into the Montreal zone.

The puck hit a stanchion behind the net and trickled in front to Sabres winger Matt Moulson, who had an open net.

Canadiens goalie Carey Price, who had left his crease to play the puck, was helpless. Moulson buried the puck with 1:18 left.

“We drew it up on the bench exactly like that,” Ennis joked.

Moulson added: “It was rolling quite a bit, so I was just making sure I didn’t miss it putting it in. But it’s always nice to get a lucky bounce.”

“I think you got to stay on it,” Moulson said. “(Ennis) was making great plays all game. I was getting chances. Sometimes you get a little fortunate after getting a couple saves on you, so it was a nice one.”

The nicest goal was Ennis’, his team-leading seventh this season, 3:27 into the contest.

Ennis zoomed into the Montreal zone down the right wing past Yemelin and cut sharply to the net.

When Ennis reached the crease, he instinctively jumped, mostly avoiding Price. The puck slid through, and an off-balance Ennis backhanded it into the net as he fell to the ice.

“I came across the neutral zone with some speed, tried to beat the defenseman with a lot of speed, take it to the net,” Ennis said. “I cut to the net, it ended up in my skate. I had to get it back to my stick and I was pretty happy that one went in.”

“That first goal by Ennis, I mean, that was one of the goals you’re going to be looking at for probably the rest of the season on certain highlights,” he said.

For much of the game, it appeared Ennis’ goal might hold up as the winner. But P.A. Parenteau tied it 1:35 into the third period, knocking a puck in on the power play Sabres goalie Jhonas Enroth appeared to have frozen.

Enroth looked strong throughout his third straight start, stopping 30 shots. Nolan hasn’t decided if the Swede will start tonight in Montreal. He planned to talk to Enroth on the plane.

The Sabres could also have a new player tonight. A lower-body injury forced winger Drew Stafford out of the game early. Nolan said Stafford was feeling better and will skate this morning in Montreal.

Still, the Sabres will “more than likely” recall a forward, Nolan said.

Update: The Sabres have recalled center Tim Schaller from Rochester.

For a moment late Friday, it appeared the Sabres had lost Gionta. The normally mild-mannered veteran chased down Emelin, his former teammate, following the scary hit.

“Those type of hits are not good to watch,” Nolan said. “I mean, those could be career-ending hits. So we’ll see what the league does with that.”