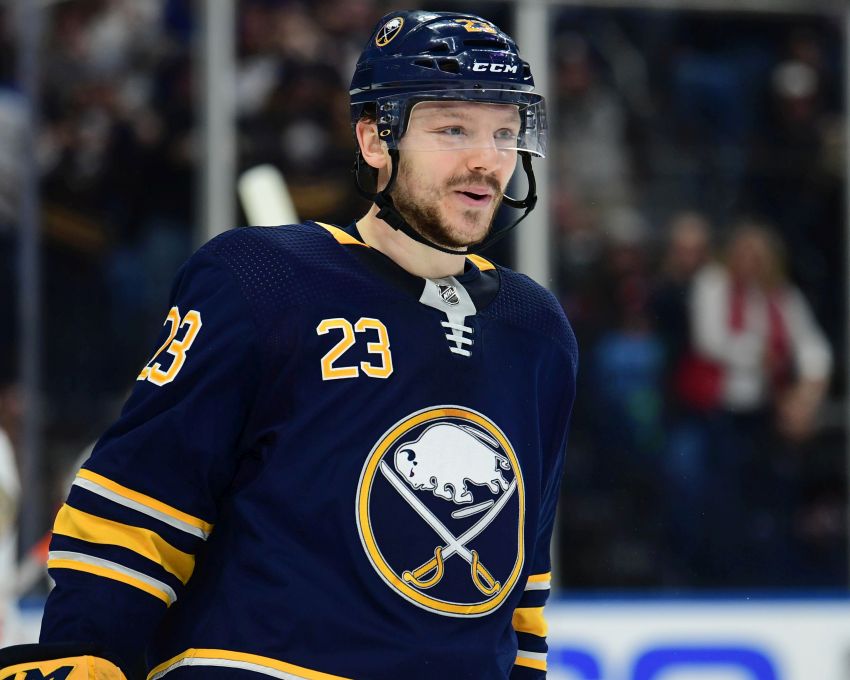 VANCOUVER – Shortly before the Sabres’ higher-ups traveled to the NHL Draft, Sam Reinhart told Jason Botterill he wanted to join them during their stay in his hometown.

So one night, Reinhart met the general manager, coach Ralph Krueger and Terry and Kim Pegula for dinner.

Then on Friday, Reinhart, a winger the Sabres selected second overall in 2014, warmly greeted center Dylan Cozens after the team’s top pick left the draft floor inside Rogers Arena.

For a minute, two western Canadian guys – Cozens, 18, grew up in the Yukon – chatted about the emotions of getting drafted and Buffalo.

Cozens, the seventh selection, will probably never forget his first meeting with Reinhart or when Sabres captain Jack Eichel called him that night.

These days, selling the Sabres to outsiders can be tough. Owning an eight-year playoff drought, the league’s longest, can shred your reputation.

Still, the Sabres have something going for them. Their young core of talent – Eichel, Reinhart and 40-goal scorer Jeff Skinner, who just signed a $72 million contract – seems to love playing in Buffalo and isn’t afraid to show it.

“Hopefully by stepping up and signing Jeff Skinner, it shows we’re going to reward players who want to be a part of things here in Buffalo. So I think that mix is hopefully attractive to other players out there.

“We certainly demonstrated at the start of the year what we can accomplish, (briefly moving to the top of the league).”

Botterill has his work cut out for him trying to improve the Sabres. Sure, they possess some nice pieces. But they need to add more high-end talent and depth if they hope to compete in the ultra-competitive Eastern Conference.

“We’re trying to build a group that has four lines that can score, that can contribute,” Botterill said. “We relied too much on Jack, Sam and Jeff last year. It’s got to come from the development of our younger players, but also if we have an opportunity to add to our group. (It was) part of our thought process in making sure we to got Jeff signed, is we wanted to add to the group, not replace him.”

But in his two years as GM, Botterill has shown a penchant for overhauling his roster via trades.

Botterill traded for Skinner, defenseman Marco Scandella and winger Conor Sheary. Last year, in about a one-month span, he dished center Ryan O’Reilly to the St. Louis Blues and acquired Skinner from the Carolina Hurricanes.

Trade activity always heats up at the draft. Botterill said more discussion has taken place among GMs this year, although he isn’t sure if that will mean more deals will materialize.

After a quiet Friday, the New Jersey Devils acquired $9 million defenseman P.K. Subban from the Nashville Predators early Saturday. The move freed up money for the Predators to pursue elite free agents.

The Devils, who finished with four fewer points than the Sabres last season, also drafted center Jack Hughes first overall. So in less than a day, they added a lot of talent.

“Teams are going to improve themselves,” Botterill said. “That’s why we have to continue looking at all avenues here.”

The $81.5 million salary cap the NHL finalized for the 2019-20 season Saturday might benefit the Sabres. There had been projections it would be around $82 million, meaning some teams must trim money.

Right now, capfriendly.com projects the Sabres have $18,915,476 of cap space with 16 players under contract.

“We do have some salary-cap space right now,” Botterill said. “It’s always that balance. We have younger players we know we’re going to have to pay in the future. So you’re trying to find other things to help your team right now. We did that last year with Conor Sheary and certainly we’re going to be open to that.”