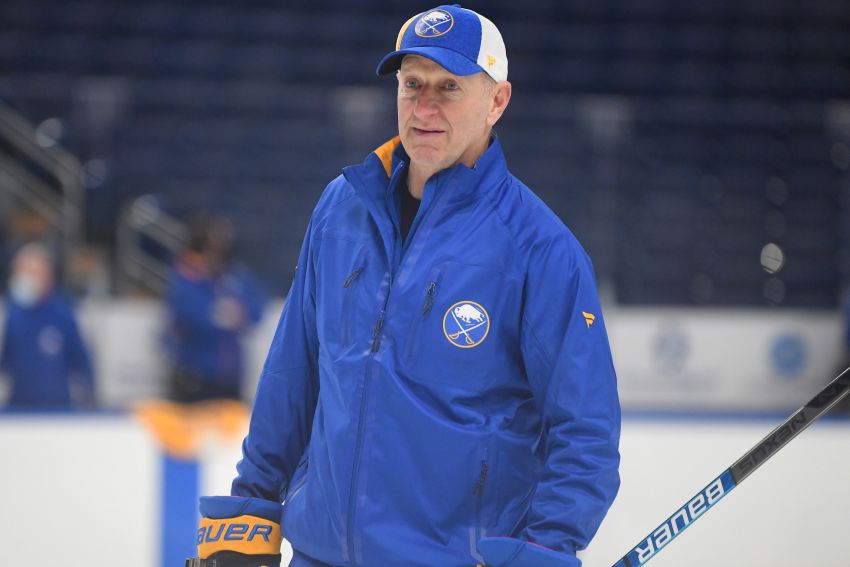 Ralph Krueger has felt the excitement from the Bills’ victory. ©2021, Micheline Veluvolu

BUFFALO – Sabres coach Ralph Krueger said he heard horns honking outside his home in the Elmwood Village into the middle of the night after the Bills advanced to AFC Championship Game on Saturday.

“Lots of sound, lots of people running around with flags in the village,” Krueger said on a Zoom call following this afternoon’s practice at KeyBank Center. “So that buzz was terrific to feel.”

Krueger and his coaching staff wanted to share the excitement the Bills generated by beating the Baltimore Ravens 17-3. So Krueger said assistant coach Steve Smith started his presentation by talking about the Bills’ ascension to the top tier of the NFL.

“How they’ve evolved and grown from being thrashed by the Patriots in big games just a few years ago and how they’re learning and growing,” Krueger said. “So it is a big buzz in our room. We’re all big Bills fans and we couldn’t be more pleased for (owners) Kim and Terry (Pegula) and the whole organization for the opportunity that lies ahead.”

The Bills will play in the AFC Championship Game for the first time since the 1993 season next Sunday. Krueger said their success provides a terrific example of the passion the Buffalo sports fan possesses.

Taron Johnson’s 101-yard interception return for a touchdown, which essentially cemented the victory, has quickly become an iconic moment in franchise history.

“It was fantastic for me to witness that on the interception, the pick six, I think the whole city just exploded and wherever you were you knew that was going on,” Krueger said. “It was a nice thing to see.”