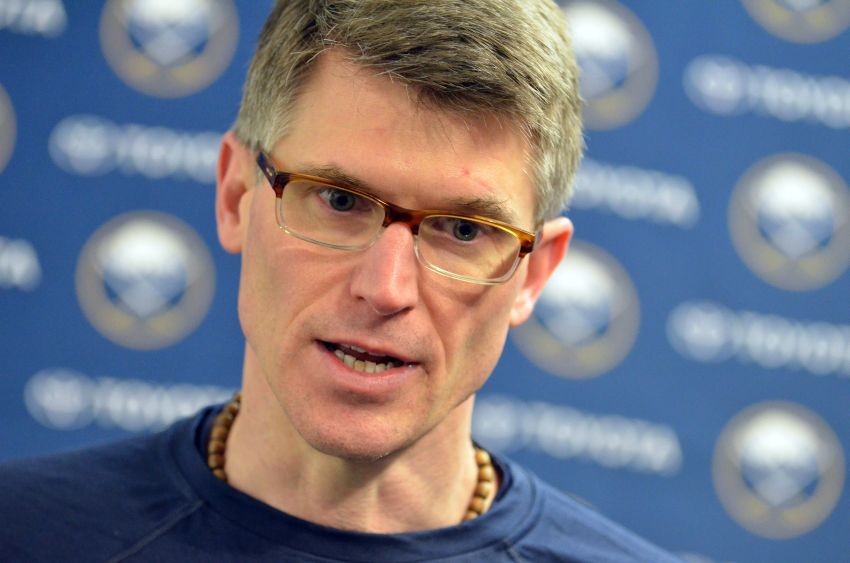 “No conversations,” Rolston said after the Sabres prepared for tonight’s season finale against the New York Islanders inside the First Niagara Center.

While the 46-year-old couldn’t get the Sabres into the playoffs, he believes the team has “made progress.”

“I’m not happy we’re not in the playoffs,” Rolston said. “We needed to do a better job there. We’ve made some progress I think as a team and we’ve played better down the stretch in terms of the success we had. I think we have seen some of the progress we wanted, but we still have a ways to go.”

Rolston is a noted talented developer, having spent time in the NCAA and running USA Hockey’s development program before the Sabres hired him to run their AHL club in 2011.

The Sabres have turned to their youth recently, becoming one of the NHL’s youngest teams. Their average age is 26.825 years, according to NHLNumbers.com. That could work in Rolston’s favor.

“That’s obviously one of the strong points that I have in terms of helping players move on and get better in development situations and that process,” Rolston said. “Right now, we’re in that. It’s been difficult with the lockout year, just the time that you have. A lot of your time is just trying to get yourself back to preparation for the next game.

“So I think a longer season gives you the opportunity for more development and more of the hands-on stuff that we need to be doing in the future. But certainly it’s my dream to be an NHL coach. I had an opportunity this year, and I’d like to continue that.”

“He had some issues with his lung, yes, he’s dealing with (it),” Rolston said. “He’s better. He’s doing well.”

Rolston said he isn’t sure if 18-year-old rookie Mikhail Grigorenko will be assigned to Rochester this weekend.