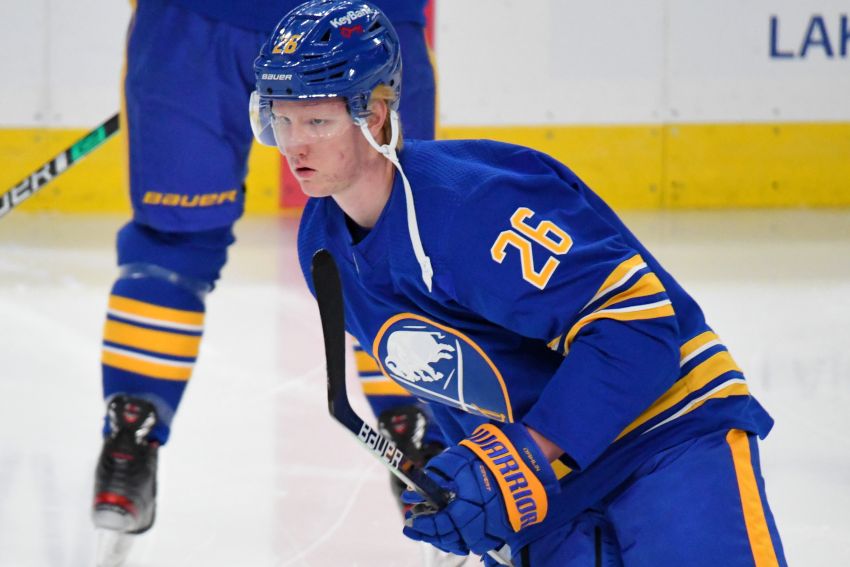 Rasmus Dahlin has taken on a larger role this season. ©2021, Micheline Veluvolu

Dahlin, 20, showcased an alarming lack of awareness early in the second period, never reacting to Scott Laughton, the puck carrier, or Kevin Hayes, his closest opponent.

When Laughton backhanded a pass from the right circle across the slot, Dahlin, who was focused elsewhere, never moved his head. Hayes, meanwhile, sneaked behind him, scoring an easy goal from below the left circle.

Hayes had shot the puck by the time Dahlin turned around.

“Everybody speaks about the second goal against, but so many good things happened in the last game and that game almost summarizes what’s going on with Rasmus here,” Krueger said on a Zoom call prior to Thursday’s 5-2 loss to the Pittsburgh Penguins at KeyBank Center.

Krueger often tries to balance any criticism of his players by praising them. He believes Dahlin, who has struggled defensively this season and compiled a league-worst minus-21 rating, has handled his bigger and more demanding workload well.

“His play with the puck, I mean, we all know it’s genius,” Krueger said. “His power-play ability is elite in the league. What we need to do is finish working on the package, the full package. We’re getting closer and closer all the time.”

So the Sabres have increased Dahlin’s ice time in his third NHL season, playing him an average of 21 minutes, 9 seconds an outing entering Thursday. That’s nearly two minutes higher than last season.

His even-strength defensive zone starts are up 4% to 45.1%. The Sabres also consistently put Dahlin, the first overall pick in 2018, out against the opponent’s top players.

“It’s just still technically working on the skills that he needs to defend against the top players in the league,” Krueger said. “He never got any of those minutes last year. We were never playing him against top lines last season. This year, he’s seeing a lot of that and he’s enjoying the challenge and it’s pushing his limits.”

He added: “The things he needs to learn are going to come with experience.”

On Tuesday, the 6-foot-3, 207-pound Dahlin recorded six hits, tying his career high. He knocked Jakub Voracek to the ice in the third period, a hit Krueger said he showed the Sabres on Thursday morning as “the highlight hit of the game.’

“I love the way he’s attacking it,” Krueger said. “We find he’s being more aggressive, he’s looking for battles. It’s not that he’s out of position.”

Sabres veteran Eric Staal, who will become an unrestricted free agent following the season, could generate interest from contenders before the April 12 trade deadline.

Centers, of course, are always coveted. But Staal, having won the Stanley Cup and scored 439 goals, is one of the NHL’s most decorated players.

Given the Sabres’ sorry state, they could try to unload their expiring contracts. Staal, 36, has a 10-team no-trade list he can submit to the Sabres, according to capfriendly.com.

“Right now, I’m not really thinking about it,” Staal said of possibly being dealt. “I’m thinking about the game tonight. Obviously, everyone knows where we’re out and the situation we’re in. But at the same time, my focus is trying to help us win a game tonight against Pittsburgh. We’ll worry about that when we get there.”

Notes: The Sabres made two lineup changes, inserting winger Tage Thompson, a healthy scratch seven straight games and 10 of the last 11, for Tobias Rieder, and defenseman Colin Miller for Henri Jokiharju. Thompson’s first-period goal was his first since Jan. 29, 2019. … Sabres goalie Carter Hutton, who did not play Thursday, has compiled a 5-1-0 record, a .940 save percentage and two shutouts in eight career games against Pittsburgh. Hutton, 35, has backed up Jonas Johansson the last three games. … Tonight’s Rochester Americans home game against the Cleveland Monsters has been postponed until April 10 “out of an abundance of caution in regard to league COVID-19 protocols,” according to Buffalo’s AHL affiliate.