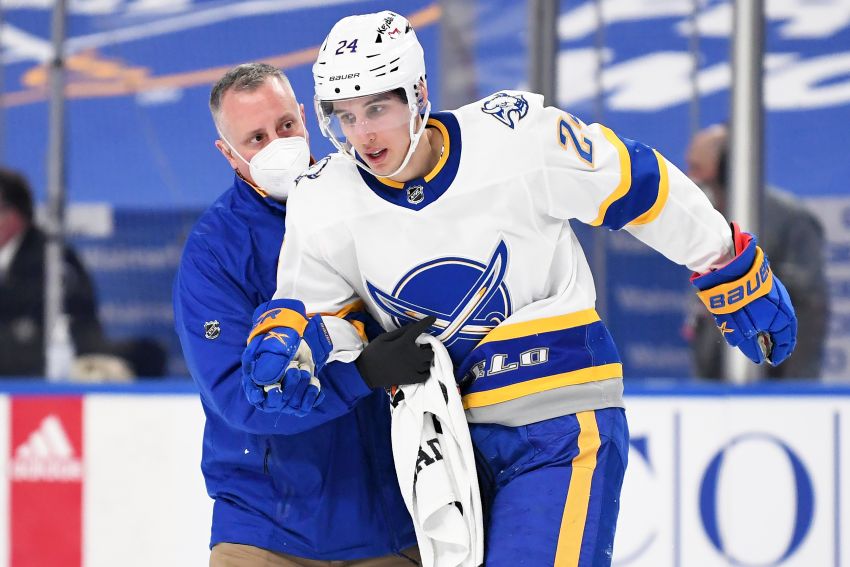 Miller doesn’t fight often, but after watching the Pittsburgh Penguins center hit rookie Dylan Cozens about six feet from the boards Thursday, he needed to stick up for his teammate.

Cozens’ head bit the boards hard and he got up slowly as Miller fought Aston-Reese 2:27 into the third period of the Sabres’ 5-2 loss, their ninth straight setback.

Krueger said Cozens, who has been filling in for Jack Eichel as the No. 1 center, was being evaluated. He did not have an update.

“It’s a push in the numbers in a real vulnerable, dangerous spot,” Sabres coach Ralph Krueger said on a Zoom call. “I think it has to be a penalty and good for Millsie jumping in there, but really difficult when you see a player exposed like that and you give them a push right in the numbers at that distance. You know the danger of that as the player.”

Aston-Reese wasn’t penalized for the hit. The Sabres, who trailed 3-2 at the time, seemingly had a spark. But Anthony Angello scored 16 seconds later, sealing the Penguins’ win inside KeyBank Center.

Here’s a scary thought. The hapless Sabres haven’t even hit the halfway mark of their dreadful season.

Thursday’s loss was only their 25th game. They still have 31 contests left!

The NHL’s worst team has lost 13 of its 15 outings since their COVID-19 pause ended.

How long will this embarrassing stretch drag on before the Sabres make a significant move?

Through all their struggles, however, Krueger said his players have kept working together, something he called “an amazing thing.”

“I can tell everybody on this call, behind the scenes the interaction and the activity and the communication is still healthy with an edge to it,” he said. “I mean, not a lot of smiling going on but we are working together on these solutions. There is a lot of passion in this group and I believe in this group. I love coaching this group.

“The pain of now is not changing that pleasure of coaching them. Millsie just showed the fire that is in this side and in this squad and we need to turn that into results.”

The Sabres, who are already enduring perhaps the worst stretch in franchise history, are suddenly woefully thin down the middle.

The upper-body injury Eichel suffered Sunday afternoon will sideline him at least another seven to 10 days, Krueger said Thursday morning.

Cozens, 20, has stepped into the NHL and quickly made an impact.

“He’s been a great kind of plug for us so far,” Miller said. “Obviously, he’s doing great. He’s a young kid and he’s being put in a lot of situations at a young age. I think he’s handled himself great. So it would be a big loss.”

Winger Victor Olofsson scored the Sabres’ other goal on a wraparound. Goalie Jonas Johansson made 22 saves.

Thompson, who hadn’t played since Feb. 25, said he found out during the morning skate he would return. He replaced Tobias Rieder

“It was just time,” Krueger said of putting in Thompson. “I’ve spoken with you all about making sure that guys don’t get stuck into the taxi skates without games and Toby’s been doing his job, but we decided to put Tage in and we liked his reaction.

“Excellent goal. It’s the kind of drive to the net, it’s the kind of aggressiveness we need from Tage with his size and his skill set so it should do a lot for his confidence and we’ll build on that moving forward. But it was a good performance by Tage after being out of the lineup.”

One thought on “Sabres lose game to Penguins, Dylan Cozens to injury”