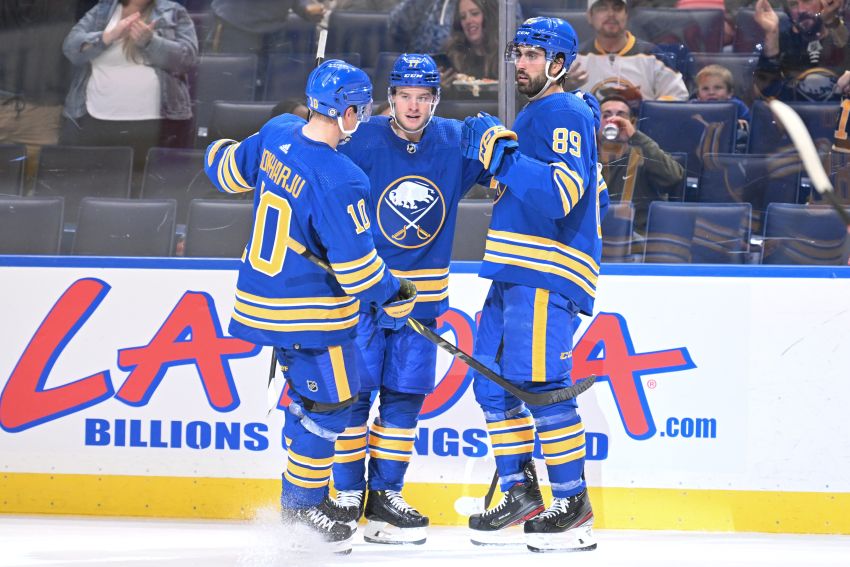 The reasoning is simple: coach Don Granato believes his veterans will send consistent messages about what the Sabres want collectively as a team.

In Tuesday’s 2-1 preseason victory over the Philadelphia Flyers at KeyBank Center, some of those prospects ranked among the best players on the ice, buoying the Sabres’ second exhibition win in as many tries.

Biro, who centered Rousek and Alex Tuch, scored both goals and just missed completing a hat trick in the third period.

Very quietly, Biro, 24, has established himself a strong prospect. A free agent out of Penn State, he played his first NHL game last season in the midst of a 41-point campaign with the Rochester Americans.

“I was comfortable with him with Tuch,” he said. “I thought Tuch did a really nice job with him, with two younger guys, and I talked to Alex about that earlier in camp that, take some guys under your wing and push guys along. I thought that Tuch was great with the two of them tonight.”

Biro said playing with Tuch “gives you a lot of confidence.”

“His speed and size really creates space for some smaller guys like Rousek and I to make plays because the threat of his speed is going to back defensemen off,” he said. “When he’s on the forecheck, guys are taking a second look because it’s a big body coming in. …

“It gives you a lot of confidence, you can just sit back and play your game and let him kind of lead the charge.”

The Sabres often rave about Rousek’s vision and ability to process the game, and 8:24 into Tuesday’s contest, the Czech, 24, created Biro’s first goal by adroitly feeding him a backhand pass from the left wall.

“He’s very intelligent as a player in many respects, but situational awareness, he’s efficient and effective,” Granato said of Rousek. “If he needs to block a shot, he reads it. If you need a good stick, good angle, he reads it if a guy’s open after he steals the puck.

“So he’s got a knack and a feel for the game combined with a competitiveness that just keep him in it. And he makes the job easier for other guys, for linemates. A lot of detail in his game.”

After Travis Konecny tied the game, Biro scored from above the right circle 8:57 into the second period.

“(He) showed skill, showed vision, and there was some chemistry there between the three of them,” Granato said. “So that was a real bonus, plus for Linus. He played a really solid game.”

The elder Samuelsson is one of Philadelphia’s development coaches.

Notes: Sabres goalie Craig Anderson started the game, stopping eight of the nine shots he faced before Malcolm Subban relieved him halfway through. Subban stopped all 12 shots he faced. He hadn’t played since suffering a wrist injury Jan. 11. … Granato skated prospect Matt Savoie, the ninth overall pick this year, between Casey Mittelstadt and Kyle Okposo, a combination he used in Saturday’s scrimmage. Savoie, 18, has played in both preseason games. … The Sabres announced a crowd 9,125 fans. … The Sabres play a road game tonight against the Columbus Blue Jackets.