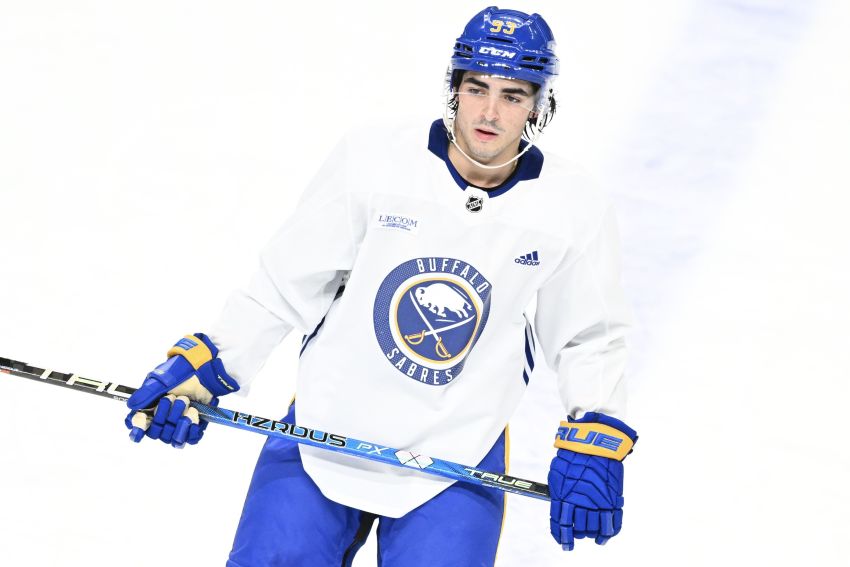 So tonight, less than a week into his first NHL training camp, Savoie, 18, will center Casey Mittelstadt and Kyle Okposo against the Philadelphia Flyers.

“When you put young guys with experienced players, it’s hard on older players if they play inexperienced, if they don’t know where to go, what to do, how to get the puck, how to read a situation, awareness,” Granato said this morning inside KeyBank Center. “And (Savoie) has a really good feel for all of that. So just in speaking with the guys that he’s with, being Mittelstadt and Okposo, they enjoyed playing with him in the intrasquad game for those reasons. And that allows us to make that decision, let’s keep them together from an intrasquad game to a preseason game.”

Granato said veteran Craig Anderson will start in goal and be backed up by Malcolm Subban. The Sabres haven’t decided how long Anderson, 41, will play.

Savoie isn’t the only youngster the Sabres have awarded a terrific opportunity. Weissbach skated at right wing this morning beside Thompson, the center, and Skinner.

“We’ve asked a lot of guys to forego familiarity and ease through training and partner up with younger players knowing they had chemistry,” Granato said. Their job would be a lot easier paired up with an experienced guy, just even through practice.”

Weissbach, who scored scored 16 goals in 67 games as a rookie for the Rochester Americans last season, has grabbed the Sabres’ attention. The Swede, a seventh-round pick in 2017, starred at Wisconsin before turning pro.

“The growth from last year at this time to this year is competing harder with more directness, like more direct intent, knowing where he should be competing harder, how he should compete harder, and that being consistency,” Granato said. “Again, with a lot of these guys, it’s elevating their personal standards, elevating their intensity, their commitment to resolve. It’s gaining situational awareness, because you come into this league and you’re a prolific scorer typically.

“In his case, a high-end talent in college hockey. And Savoie, we just talked about, a high-end talent in junior hockey. Life’s pretty easy, they get by on a lot of talent. They don’t have to really pay attention to situations; they can impose their will on the game. And you move to this level, you can’t. Not like you could on the previous level. So Linus has really improved in all those areas.”

The rest of tonight’s line combinations and defense pairings are below.

Pilut and Savoie are the only players who also participated in Sunday’s game.