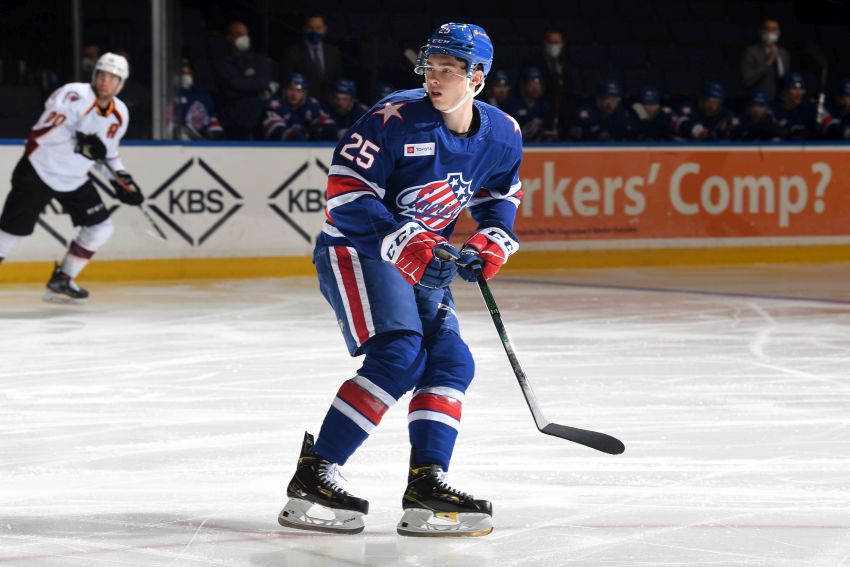 In scoring his second goal as a pro, Buffalo Sabres prospect Jack Quinn showcased some of the slick skills that made him the eighth overall pick in 2020.

On Saturday, Quinn utilized his speed to beat a Syracuse Crunch defender down the right wing before his hard backhander from the edge of the slot cemented the Rochester Americans’ 5-3 road win.

But Quinn’s willingness to cut to the net and go to the so-called “dirty area” grabbed coach Seth Appert’s attention.

Quinn possesses a shot so lethal he could’ve scored from the wing.

“What I liked about it was he got to the inside,” Appert told the Times Herald. “That’s something that’s important to do for a goal scorer. I know that’s something he worked a lot on with his coach in junior hockey, getting to the inside. And it would be easy to take that puck and stay wide.”

The power-play goal illustrated some of Quinn’s development during this unique season.

“That’s a big way for me to score goals,” Quinn said. “I need to figure out how to get to the net a little more.”

In a normal year, Quinn, 19, would’ve returned to Ottawa, where he likely could’ve scored at least 50 goals for the Ontario Hockey League’s 67’s. The winger scored 52 times in 62 OHL games last season.

Teenagers usually can’t play in the AHL if they have junior eligibility. But the COVID-19 pandemic has kept the OHL season paused, meaning Quinn and other prospects have a unique opportunity to compete against men.

“It’s important that he’s learned how good the American League is and how hard it is to score at this level, how strong guys are, and that’s going to fuel and drive even more relentless work from him in the offseason,” Appert said.

The 6-foot, 176-pound Quinn has looked comfortable in the AHL from the get-go, scoring a shootout goal and recording an assist in his debut Feb. 18.

Still, he’s cognizant his skill will only take him so far. So he has embraced the challenges that accompany playing pro hockey as a teenager.

“As challenging as it’s been, it’s also, I think, the best thing for me,” he said. “I think you can grow a lot when you face adversity. I think I’ve faced adversity this year. I haven’t played as well as I want to, but I think that’s helping my game grow a lot as I was figuring it out here this year.”

So far, Quinn has registered six points in 11 games. Saturday’s outing – he also recorded an assist and four shots – might’ve been his best performance.

“That was probably the most dangerous he’s looked offensively throughout a whole game,” Appert said. “Like, there was many shifts where you felt he could score.”

Appert said Quinn has quickly adapted to the faster style he must play in the AHL.

“And I don’t mean by how fast he’s skating; I mean by understanding that you’ve got to play give-and-go hockey at this level to become a great offensive player,” he said. “Very few players in the world can just hold it, hold it, possess it, lean on people. …

“The best scorers at higher levels, in the NHL, they don’t have the puck a lot usually. They give it and then find an opening and get it back and then deliver that potent shot, and I think that’s something he’s really delivering on here.”

Jack Quinn roofs the back hand for a PP goal! Assist to Oglevie and Laaksonen. Amerks up 5-3. pic.twitter.com/ZovPPZJHlD