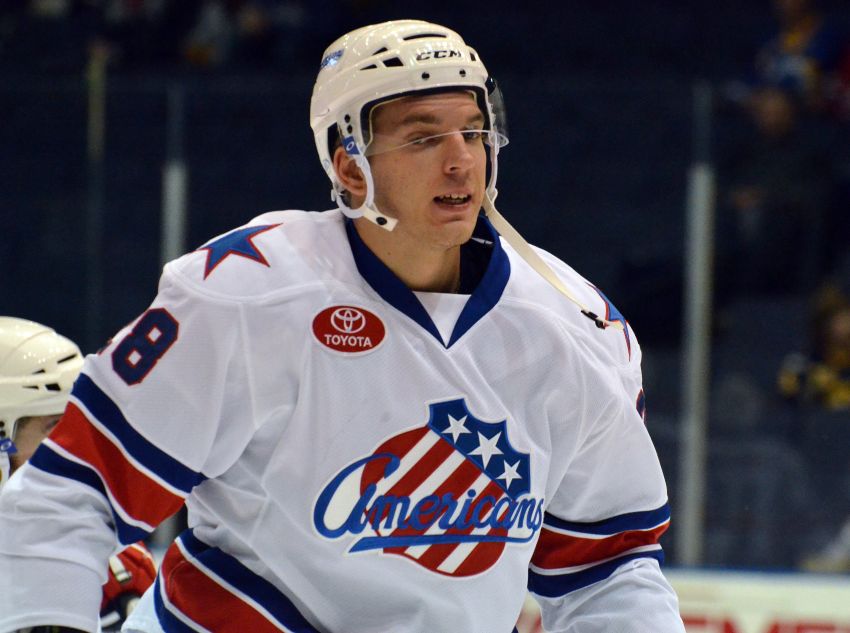 As a teenage rookie, Girgensons was supposed to play a supporting role during the Amerks’ first-round playoff series against the powerhouse Toronto Marlies. The Latvian winger scored only six goals in 61 regular-season games this year.

But Girgensons, a hard-hitting prospect the Buffalo Sabres moved up to select 14th overall in 2012, quickly morphed into one of the best players in the hard-fought series, scoring three of the Amerks’ five goals in Toronto’s three-game sweep.

“He didn’t look like a 19-year-old,” forward Cody McCormick said Wednesday inside the Blue Cross War Memorial after the Marlies’ 3-2 overtime win eliminated the Amerks. “I thought a lot of time he was the best player on the ice between both teams. His compete level is something that I think about right now, and he definitely stepped it up. …

“What made him the better player on the ice a lot of the time was his compete and his willingness to go through body checks, blocking shots. He made some pretty good goals for us. That’s the skill level, and that comes with his compete level.”

That’s Girgensons in a nutshell, grit and tenacity mixed with skill. He said he showcased his dogged style throughout the regular season. The goals wouldn’t come, though.

Girgensons “got some luck in the playoffs,” he said.

“I think I played the same,” said Girgensons, who scored Wednesday. “I worked my (butt) off the whole year and I didn’t get the bounces through the year. It was I knew if I keep working the way I’ve been working, then I’m going to get bounces. That showed in the playoffs. I got a couple goals.”

Did Cassidy, who played Girgensons beside Johan Larsson and Brian Flynn, expect the neophyte to suddenly become a difference-maker?

Girgensons had three goals in his last 34 contests before scoring twice in the series opener.

“There was a little bit more reward for it in terms of him being able to finish,” Cassidy said. “Three goals in three games was great for him. More than anything that I’ve seen is just his confidence with the puck has been through the roof, even the last two months. He always plays hard. He always plays through people. He’s tough to play against.

“But you can see his confidence when he has the puck that he knows he can make that extra move and make a play with it as opposed to early in the season. I think the game was going so fast in his mind all the time because of the level and the pace of play. So his development, to me, is just off the charts what he’s been able to do this year.”

Girgensons, who made the rare jump from the junior United States Hockey League into the AHL, called his first professional campaign “just a tough season mentally.” Still, he said he “felt good from the start.”

“I think I’ve grown a lot, especially being around all these guys, the old guys, Matt Ellis, Cody McCormick,” Girgensons said. “I learned a lot from all the old guys.”

Does he feel close to the NHL now?

Girgensons said he might be joining the Latvian national team for the upcoming world championship.