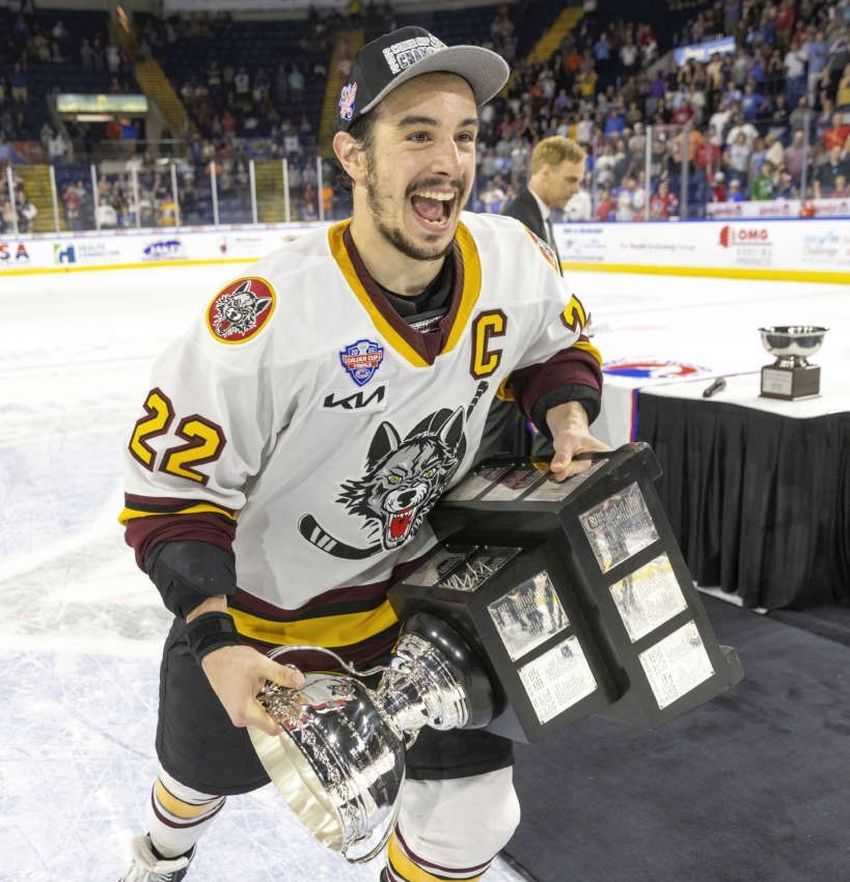 At 28, having played just four NHL games, Andrew Poturalski understands some teams view him as a tweener – too good for the minors but not quite big league material.

As he begins his seventh pro season, Poturalski, who signed a two-year, one-way contract with the Seattle Kraken on July 13, has developed into one of the most talented and decorated players in the minors or Europe.

The 5-foot-10, 185-pound Williamsville native enjoyed one of the greatest AHL seasons ever in 2021-22, captaining the Chicago Wolves to the Calder Cup championship and becoming the league’s first 100-point scorer in 12 years.

The center also led the AHL in scoring in 2020-21 and topped the league in postseason points in 2019, when he won his first Cup with the Charlotte Checkers.

Still, opportunities in the NHL have rarely materialized.

“I’m looking to get in the NHL, get a stint and prove that I can play there and establish myself as a player and move up from there,” Poturalski told the Times Herald in late July. “It’s the same with everyone in my situation, the hardest thing to do when you get caught as a tweener between the AHL and NHL.”

Last season, however, he played two games for the Carolina Hurricanes as they battled COVID-19 problems in mid-December, his first NHL appearances since 2016-17, his rookie campaign.

Poturalski, who barely eclipsed 20 total minutes of ice time, recorded an assist in his first shift both outings, his first NHL points.

The recall, of course, was rewarding – “A long time coming,” he said – and all-to-brief.

“I feel that I deserve an opportunity to play in the NHL and see what I can do,” he said. “That’s up to me whether I can stay or not.”

Right now, Poturalski might have his best chance to stick in the NHL. As a prolific AHL scorer – he compiled 28 goals and a whopping 73 assists and 101 points in 71 games last season – he had plenty of suitors in free agency.

Poturalski sees a fit and an opportunity to establish himself in Seattle, which starting its second season. Kraken general manager Ron Francis also signed Poturalski out of New Hampshire in 2016 when he served in the same role with the Hurricanes, so there’s familiarity. The Kraken struggled to score last year, ranking 28th in goals.

Maybe, just maybe, he can earn a long look.

“I’m undrafted, I’m 28, I’ve done well in the AHL,” said Poturalski, who acknowledged he has a chip on his shoulder. “But a lot of people are quick to say, ‘Oh, he’s just a good AHL player and that’s it.’ I just think it’s unfair to say that without giving an opportunity. If I had 50 games in the NHL and I didn’t do anything with it, then I’d say it’s fair to make those assumptions.”

“He’s very confident in his ability but he’s not arrogant or cocky about it,” said Warsofsky, now an assistant coach with the San Jose Sharks.

Poturalski, Warsofsky said, also has “a great self-analysis of his game.”

“That’s something that is hard to teach, is hard to show accountability toward, and I think he’s matured in that way where he can come in and say, ‘Yeah, I wasn’t very good last night,’ or, ‘Yeah, I made that mistake up the middle, that’s on me,’” he said.

That self-examination has helped Poturalski evolve. For example, he spent the last two offseasons working to improve his speed, perhaps his biggest flaw.

His quickness clearly paid dividends last season, when he was reunited with Warsofsky, one of his assistant coaches in Charlotte.

In naming Poturalski, someone he called “a quieter guy,” his captain, Warsofsky said he wanted to give him a bit of a challenge, take him out of his comfort zone.

“That doesn’t mean he leads to be really vocal, but he can lead by the way he practices, the way he lives off the ice, the way he competes for pucks,” he said. “All the little details in his game that will get him to the NHL now become even more highlighted because he’s wearing a ‘C’ on his chest. …

“I wanted to see him step up in that role and … mature in his professional career a little bit more. And he did an outstanding job.”

Poturalski hadn’t been a captain since his high school baseball days.

“Not a bad first year being able to lift the Cup at the end of it,” he said.