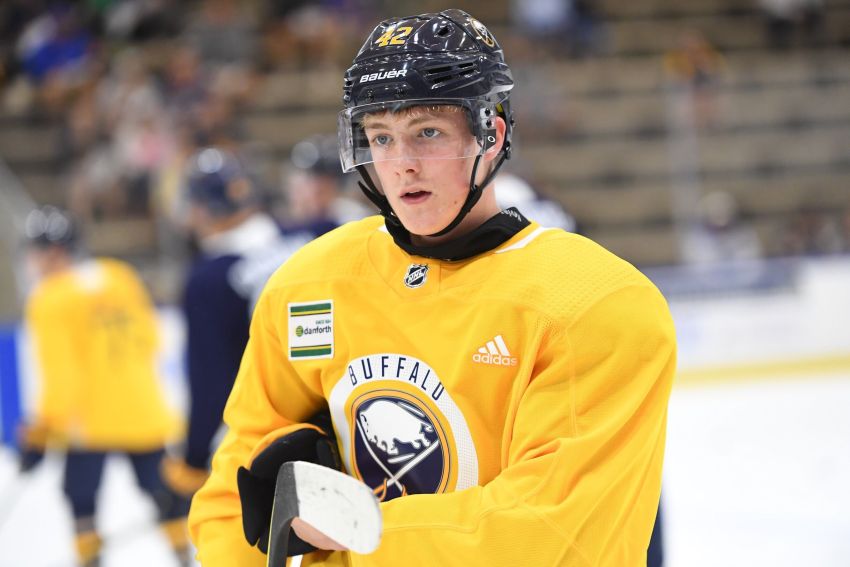 “That’s my shot to kind of piss him off, get in his head and try to win the game for the team,” Pekar said after camp ended inside HarborCenter. “I guess it worked out.”

Pekar, the 94th overall pick a week ago, kept going after Mittelstadt, irking the Sabres’ top forward prospect. The youngsters shoved. For a few seconds, it looked like they would fight. Pekar’s Team Hasek eventually won the game.

“It’s way more fun when you see Casey getting pissed at you,” he said.

Any physicality or scrapping during camp usually involves invites or later-round picks looking to make an impression. But Pekar said he loves “to be the annoying guy.”

“I’m not a super-skilled guy that just can dangle all over five guys and score a goal,” he said. “In order to create some offense, I got to play like that.”

During a later tilt between Team Hasek and Team Martin, Pekar and Mittelstadt shoved again near the benches. Eventually, center Eric Cornel came to Mittelstadt’s defense.

“It’s just hockey, I guess, two competitive guys,” Mittelstadt said. “I don’t think it’s anything. Leave it on the ice. I’m sure it’ll be fine when we get off it.”

Sabres coach Phil Housley said the battling was “just the spirit of the moment.”

“Matej is a competitor and you could see it,” he said. “When competitive situations arise, we want competitive players, and I thought he did a great job today.”

“There wasn’t any hard feelings, no,” Dahlin said. “It’s all good now.”

After the hit went viral, Pekar said he and Dahlin laughed about the it together at a table.

“It was all over the media,” he said. “The Czech national team posted it.

“We’re trying to get faster and he can bring that,” he said.

“Hunwick is a very reliable puck-moving defenseman that has great mobility,” he said.