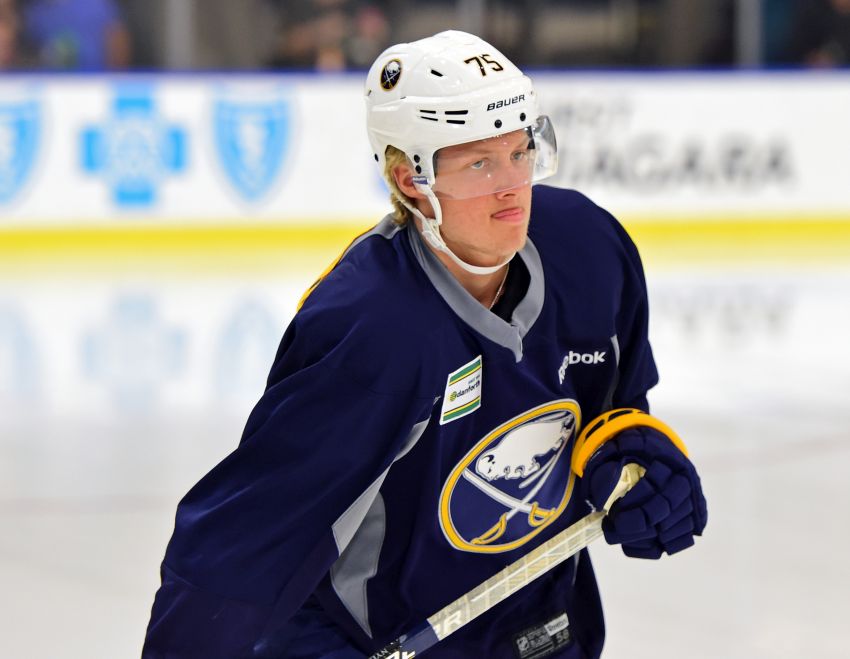 But when a player is that talented, Fasching, 20, likes to examine him a little closer.

“You can kind of just tell, if you pay a little extra attention to him, every puck he shoots it’s crisp, it’s in a direction,” Fasching said Wednesday following the first sessions of development camp inside HarborCenter. “He’s aiming for a really small area, and a lot of times it looks like he’s hitting it.”

Many experts and most of the Sabres’ large fan base believe drafting Nylander will be a hit. There’s already speculation regarding where the Swedish winger could play in 2016-17.

The Sabres have four options: the NHL, a return to the Ontario Hockey League, Europe or the AHL, a league he can play in since he was loaned to the Mississauga Steelheads.

Nylander, the only first-round pick in camp, said he hasn’t thought about where he might wind up.

“I think I’m thinking more coming into rookie tournament (in September), things like that, what happens after that,” he said.

So for now, Nylander’s trying not to look too far ahead. He’s one of 43 prospects in camp. The talent range, as it is annually, is broad. Three prospects – Fasching and wingers Justin Bailey and Evan Rodrigues – have already played for the Sabres. There are also late-round picks and camp invites.

Fasching, who played seven NHL games late last season, is a camp veteran, having participated in the last three.

Six 1998 birthdays are on the roster, including Nylander. The oldest player is goalie Steve Racine, 25, a Williamsville native the Sabres invited late after Linus Ullmark stayed home. In a tweet, Ullmark said “sickness” was holding him out.

Five minutes before his session started Wednesday, Osmanski was sitting nervously inside the dressing room, wondering if he should go on the ice early.

Eventually, Osmanski left and was the first player on the ice. Bailey, a Williamsville native, followed him.

Wearing a Sabres jersey for the first time on the ice was “a little different” and “amazing,” said Osmanski, a defenseman with Steelheads.

When the some of the hype around Osmanski’s selection settled down, Bailey, a 2013 draft pick, sent him a message and offered him any help he needed.

Osmanski should feel comfortable during the next week. In addition to Nylander, his close friend, the Sabres have another Mississauga player, Swedish winger Daniel Muzito-Bagenda, in camp. Muzito-Bagenda recently signed an AHL contract with the Rochester Americans.

“It’s just been a lot of fun,” Nylander said.