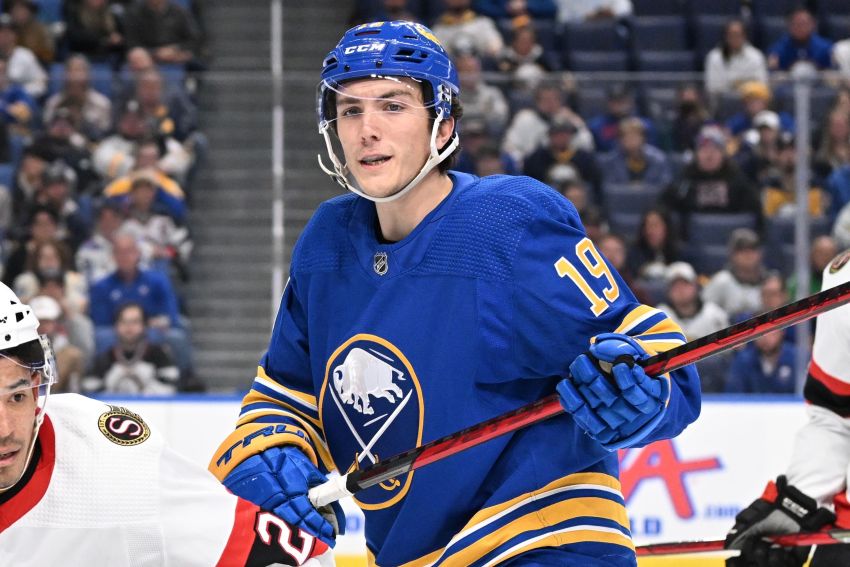 BUFFALO – If he had grabbed the puck in the same area just a few weeks earlier, Sabres center Peyton Krebs might’ve held onto it or dished it off.

Shooting likely wouldn’t have been his first choice.

But when Krebs zoomed into the Anaheim zone late in the third period Saturday afternoon, he looked hellbent on beating Ducks goalie John Gibson. After taking a few quick strides, he unleashed a wicked wrist shot from high in the slot, scoring his second goal in the Sabres’ 6-3 win.

“I don’t think any of us have seen him rip a puck the way he scored that second goal tonight,” Sabres coach Don Granato said following the game in KeyBank Center. “You don’t shoot that if you don’t believe you can score from there. I don’t know if that was the case earlier in the year, even three weeks ago that he would have taken a shot from that area because you don’t think you can score from that area.”

Krebs’ third goal in the last three games and sixth this season illustrates his burgeoning confidence and capped perhaps the best outing of his 98-game NHL career.

“That’s just another piece he’s adding to his game,” Granato, whose Sabres played a road game Monday against the Dallas Stars, said of Krebs’ shot. “If we can get a guy like that believing he can score, his passing is going to be even more dangerous because you’ll have to respect that shot. That’s a big addition to his skill set.”

“What I’ve learned is when you pass through the shot, the passes open up more and when you shoot more, the passes tend to open up more,” said Krebs, who began Monday contests with just 35 shots in 37 games. “I’m just trying to, if the shot’s there, definitely make it because I have Z and Okie going to the net.”

Krebs utilized his shot throughout Saturday’s game, pumping a season-high three on goal and attempting six. His second-period goal briefly put the Sabres up 3-2. With the game tied later in the period, he fought Ryan Strome, the second scrap of his career.

As Krebs and Strome began trading punches near the benches, the play was whistled dead, negating Anaheim’s two-on-one.

“That was tactically genius on his part to do that,” Granato joked. “His teammates noticed that as well. To get a whistle blown when we had a two-on-one against was worth the fight itself, I guess.”

The fight also generated much-needed momentum after the Sabres had blown two leads against the Ducks, helping them score three late goals.

“He loves that probably more than I, but he has a way of making sure he does it right in front of his teammates,” Granato said. “Two fights he’s had right in front of the bench so he can turn around and tell the bench, ‘Let’s go.’ Definitely leadership components there to get his team going. Love his fire. Love his energy.”

Krebs said: “That’s what I’m trying to do, just pump up the boys, get them fired up to have the best period possible. We did that.”

Despite sitting him out eight times this season, Granato hasn’t lost confidence in Krebs. For most of the year, they Sabres have had a surfeit of forwards, so he has occasionally been a part of a rotation or the odd man out.

Krebs, who turns 22 on Thursday, has tried to remain patient and use the time off to be what he called “a student of the game.”

“The nice thing is he’s not coming into the lineup trying to prove something to us as coaches or to Kevyn (Adams) as the general manager,” Granato said. “He knows we believe in him. He’s just coming in and he’s taken the opportunity to sit out a couple of games and add something to his game and find a way to add things to his game.”

In a paper move Jan. 13, the Sabres loaned Krebs to the Rochester Americans so they could recall rookie Ukko-Pekka Luukkonen and keep three goalies in play.

Since he returned from a two-game absence, he has been one of the Sabres’ best forwards. He scored a short-handed breakaway goal in last Tuesday’s 4-3 overtime road loss to the Chicago Blackhawks. He also skated 15 minutes, 55 seconds, his second-highest total this season.

That night, Krebs, Okposo and Girgensons registered a team-high 83.3 percent Corsi For, according to NaturalStatTrick.com.

“That’s consistency and kind of the drive to be here,” Anderson said recently of what the number means to him. “There’s kind of an innate, inner drive that is inside that just says I got to compete and I want to be here competing and you feel like you can still compete at this level.

“Seven hundred, it’s a test of time. It’s something that a lot of things had to go right to get to this stage. You had to go through some hurdles, a lot of bumps and bruises along the way, a lot of learning lessons, a lot of setbacks, so to speak. But (there was) perseverance and pushing through to find a good fit and find your role.

“I think that’s probably the most important thing, is finding your role from year to year and taking that role and doing it to the best of your ability.”