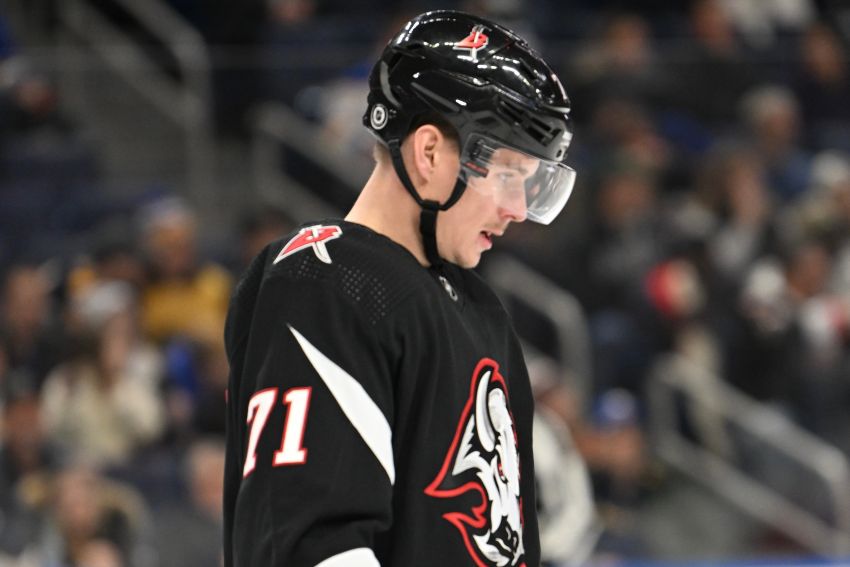 BUFFALO – At times this season, Sabres winger Victor Olofsson has battled adversity and the perception he’s too one-dimensional.

For stretches, he has struggled at even strength and lost ice time, doing little to dispel the belief he’s simply a power-play guy who possesses a lethal shot.

Still, 45 games into the campaign, Olofsson has already registered a career-high 21 goals.

The Swede scored twice in the third period of Saturday afternoon’s 6-3 victory over the hapless Anaheim Ducks at KeyBank Center, including the game-winning goal. Right now, he’s scorching, having scored six goals in the last six games and eight times in the last nine contests.

Olofsson, who hit the 20-goal mark as a rookie in 2019-20 and again last season, is on pace to score 38 goals. He has scored five of his last six goals at even strength.

“I feel like I had a great start, obviously, and that helped me a lot,” Olofsson said of what he has experienced this season. “And then I had a small dip and I feel like these last 10 games we’ve been really clicking as a line, too.”

That line, of course, also features center Tyson Jost, a waiver claim in November, and winger Casey Mittelstadt. After Sabres coach Don Granato put them together in early December, they struggled for weeks, sometimes looking invisible on offense while getting scored on.

The other trios, however, were clicking, so Granato left Olofsson, Jost and Mittelstadt together and let them play through their problems.

“There’s moments you want to help guys and there’s moments that helping guys is giving them an opportunity to fight through things,” Granato said prior to the game. “And if we change every day the wind blows, we’re going to be in trouble. And if we can’t handle a little challenge and adversity and find a way to fight through it, we’re going to be in trouble.

“Me and Mittsy, we’ve been playing a lot last year, too, together, and we know each other very well,” Olofsson said. “And I think Josty, just we had to kind of find chemistry with him, obviously. And he brings a lot to our game with hard work. I think his offensive skills are very underrated, too.”

He added: “We’re just feeding off each other and they’re feeding me with great passes.”

Granato said he wanted the linemates to “fight through” their struggles.

“He’s growing,” he said. “… There’s been some chemistry developed with Jost, Mittelstadt and Vic, but tonight it was beyond chemistry. He was very impressive in a couple of instances with the goals and all of those guys are stringing together lots of consecutive games being very consistent.”

After the Ducks erased two deficits – the Sabres led 2-0 after the first period and 3-2 in the second – Olofsson scored 2:12 into the third, burying defenseman Ilya Lyubushkin’s nifty pass.

Lyubushkin, who recorded a career-high three assists, stole the puck at Buffalo’s blue line and fed Olofsson at the bottom of the right circle from the left wing.

“He fed me with beautiful pass, perfect timing, right on my tape,” Olofsson said. “So that was a very easy goal for me.”

He scored again at 8:07, beating goalie John Gibson on a breakaway. Jost recorded an assist.

Olofsson wasn’t the only Sabres player who has endured some hard times this season to make an impact against the Ducks.

Goalie Ukko-Pekka Luukkonen made 33 saves, including some critical ones early and later with the game tied. Center Peyton Krebs, who recently sat out several games, scored twice and also fought Ryan Strome. Lyubushkin, who has taken some ill-timed penalties and looked a bit erratic defensively, enjoyed one of the best nights of his career.

“The four players have faced a lot of adversity this year, a lot of challenge this year,” Granato said. “Some have been in and out of the lineup. Some have been called out not even by me, but publicly. And it’s been hard on them. Victor’s one of them, and he just did the right things through that and helped us win a game in a big way. …

“That’s something that our team takes a lot of pride in, those guys knowing their teammates fought through adversity and tonight was a big night for those guys.”

Prior to the game, Sabres legend Ryan Miller dropped the puck for a ceremonial faceoff between Gibson, his former teammate, and goalie Craig Anderson, who backed up Luukkonen.

Miller’s son, Bodhi, accompanied him on the ice.

On Thursday, the Sabres retired Miller’s No. 30 and inducted him into their Hall of Fame.

Sabres defenseman Rasmus Dahlin recorded two assists Saturday, giving him 52 points this season in just 44 games, leaving him one shy of the career high he set in 80 outings last season.

Dahlin created Krebs’ first goal by zooming behind the net and finding him in front.

“When he has the puck going to the net, he’s going to find your tape,” Krebs said.

Notes: The Sabres are 6-1-0 in their black “Goathead” alternate jersey and have scored six goals in six of the seven games. … Luukkonen has won nine of his last 11 starts. … The crowd of 19,070 fans was the Sabres’ second consecutive sellout. … The Sabres scratched winger Rasmus Asplund, defenseman Kale Clague and goalie Eric Comrie (all healthy). … Olofsson has six multi-goal games this season, tying him for first on the team with center Tage Thompson. … The Sabres begin a four-game trip Monday against the Dallas Stars. They don’t play another home contest until Feb. 1. … The Sabres have today off.