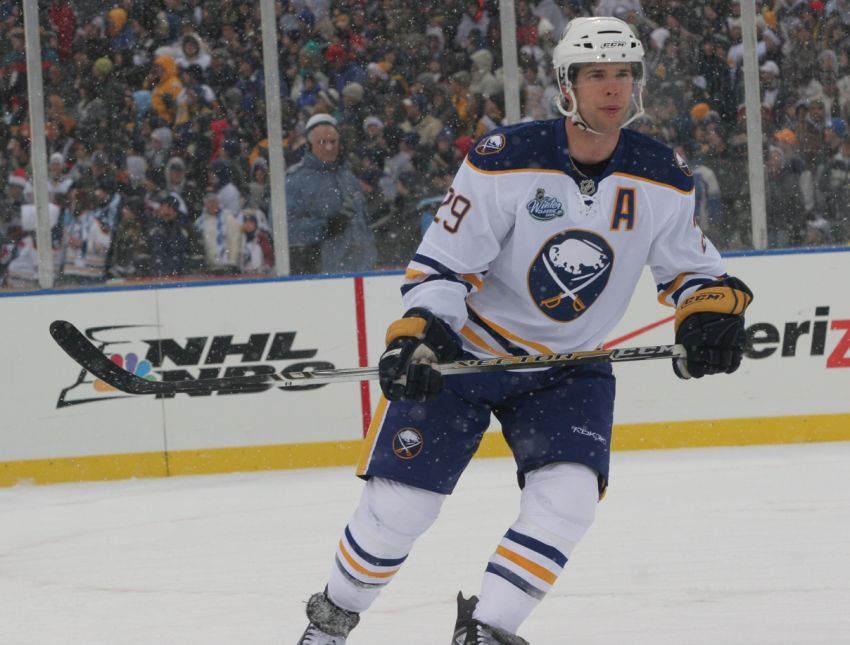 “At the time, (it was) heartbreaking, because you always want to play in something like this,” Rodrigues said Sunday after the Sabres prepared for this afternoon’s Winter Classic at Citi Field. “I think this tops it.”

To a man, the Sabres are excited – most couldn’t stop smiling Sunday – to play outdoors against the New York Rangers.

Some have been through this before. Winger Jason Pominville played in the first Winter Classic in Orchard Park 10 years ago. Heck, winger Benoit Pouliot is about to play in his fifth outdoor contest. Winger Jordan Nolan played in two outdoor games with the Los Angeles Kings, although both were in California.

Sitting in the visiting clubhouse with much of his special throwback-style uniform still on following the Sabres’ nearly 60-minute practice, defenseman Zach Bogosian seemed ready for the game to start.

“You feel like a kid,” Bogosian said. “You feel like you’re back in your childhood. It’s a cool thing. You don’t lose that feeling when you play in the NHL, on a normal rink, but to do it outdoors, it just brings back that smell of being outside and the wind hitting your face. There’s really nothing like it. That’s at the core of who we are as hockey players. …

“To have that as an adult, on a huge stage like this, it’s a cool experience.”

Bogosian, 27, skated on frozen rinks every chance he could as a child in Massena.

“Growing up in a different time, a small town, there wasn’t too much my parents had to worry about,” he said. “So you just kind of just left the house and played outdoors for as long as you could. A lot of my friends had backyard rinks and spotlights and all that kind of cool stuff so you could play at night. It was a lot of fun. It brings back a lot of good memories as a kid.”

To Bogosian, a former third overall pick who has played 547 NHL games, an outdoor game ranks among his most special achievements in hockey.

“This is right up there for me,” he said.

Sabres coach Phil Housley, who retired from his Hall of Fame playing career in 2003, never played in an outdoor NHL game. But growing up in Minnesota, he said South St. Paul had 10 outdoor rinks.

“Every day we’d be out there and your mom would have to try to get you back in the house,” he said. “This is just one of those situations where we’re really fortunate to be able to play in this game. We’re going to take advantage of it, let’s enjoy it.”

After the practice, the Sabres skated with their families, another special experience. Nolan said his family, including his father, former Sabres coach Ted Nolan, participated.

“He was out on the ice,” Jordan Nolan said. “He was flying around there.”

The Sabres, of course, wore extra layers during Sunday’s practice. They sported winter hats early before putting on their helmets. Most also wore eye black, you would think, to the help reflect the sun.

Not for Sabres winger Evander Kane.

“It’s all about style points,” he said. “It does absolutely nothing when it comes to the sun. … I’ll probably spend a little bit of time in the bathroom later on tonight trying to figure out what looks best for me and bring that into (today’s) game.”

The Sabres practiced with temperatures in the mid-teens, although the wind made it feel colder.

“Hopefully the wind will be at our back (for) three periods,” Housley joked.

Sabres winger Sam Reinhart said the wind made his stick feel heavier. The ice was “pretty good.” The sun, however, was tough at the start of practice.

“We got a little bit of cover later on,” Reinhart said.

At game time, temperatures will be in the low teens with no chance of precipitation and 15 mph winds, according to weather.com.