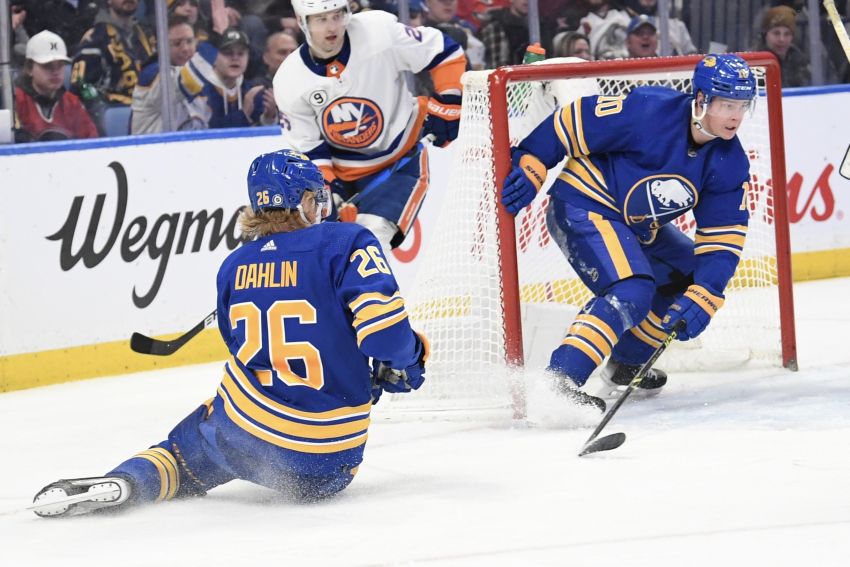 BUFFALO – Having established himself as a top-pair defenseman for the rebuilding Sabres, it can be easy to forget how badly Henri Jokiharju struggled throughout much of last season.

This afternoon against the Colorado Avalanche, Jokiharju will almost certainly eclipse the 20-minute mark in ice time for the 11th consecutive game. The Finn, along with his partner, Rasmus Dahlin, will be tasked with trying to shut down Gabriel Landeskog, Nathan MacKinnon and Mikko Rantanen, perhaps the NHL’s most lethal line.

But last March, Jokiharju, 22, couldn’t crack the lineup at times during the Sabres’ embarrassing 18-game winless skid. Jokiharju, perhaps the team’s most consistent defender in 2019-20, was even briefly demoted to the taxi squad.

It probably seems like ages ago because Jokiharju has developed into one of the Sabres’ steadiest presences. When Granato took over as coach March 17, Jokiharju joined the active roster again. He quickly settled down and began rebuilding his game.

“So he targets well, he accepts responsibility well; he looks in the mirror and tries to fix what he can and that’s led him to where he’s at paired with Dahls.”

Dahlin, one of the NHL’s most dynamic young defensemen, has certainly helped buoy Jokiharju’s development.

“Ras helps a lot, too, so it makes my game easy,” said Jokiharju, who recently began manning a point on the power play.

Their ability to quickly kill plays and transition into offense has helped Jokiharju and Dahlin solidify themselves as the No. 1 tandem. It’s something they’ll have to do all afternoon at KeyBank Center. Colorado, the league’s second-highest-scoring team, has five players who have already recorded at least 45 points.

“They’re in search of how to kill a play really fast,” Granato said of Jokiharju and Dahlin. “I mean, they don’t want to retreat and defend. They want the puck they want to get to possessing it. So that’s where they’ve been really effective, how fast they kill plays. Lots of times they kill plays before it exits the offensive zone or right as it exits the offensive zone, so they don’t spend much time in their D zone relative to others because of how aggressive they kill plays.”

Dahlin said when he and Jokiharju are at their best together, they “have good gaps.”

“That’s where everything starts, where we kill plays,” Dahlin said. “If we play solid D, the offensive (will) just come. I think we talk a lot about that. If we are skating a lot and have good gaps, that makes our game a lot better.”

The duo’s willingness to be hard on each other and call out their mistakes has also contributed to their success.

Yes, they’ve become close friends over the past three seasons. They’re almost the same age and as Dahlin, a Swede, said, “almost from the same country.”

“We share a lot of things so we’re good buddies,” Dahlin said.

But they’re not afraid to get on each other.

He added: “We want each other to succeed. We make each other the better, and I think that’s a key.”

Granato said playing with Dahlin’s competitiveness has also brought out more from Jokiharju.

“He’s a little bit more cautious by nature but he’s a competitor,” Granato said of Jokiharju. “And so the more experience he gets in that I think he, Joki, elevates his standard as a result of those experiences. And so I love the way they’re playing as a pair. They’re doing things that are very efficient work as a pair, as a unit.

“And they’re enjoying it. So I think they’re up for any challenge that we can throw in front of them now.”

They have a pretty stiff one this afternoon.

“It’s a good challenge,” Jokiharju said. “We can see where we’re at at that moment.”