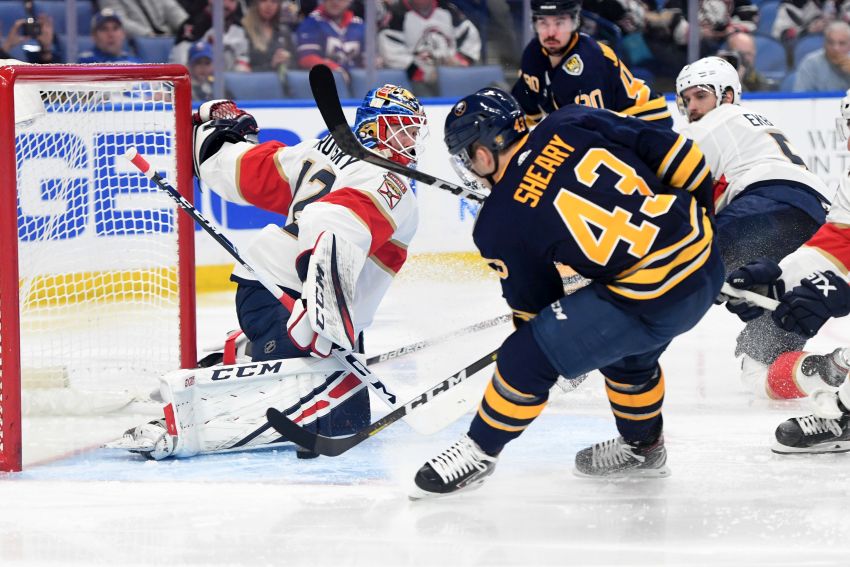 BUFFALO – By the final minutes of Saturday afternoon’s 3-2 win, most of the crowd of 17,731 had seen enough of the Sabres and departed KeyBank Center.

It was nothing against them. The spirited fans enjoyed the Sabres’ second straight victory – it was one of the noisiest contests this season – but they had somewhere to go.

The Bills’ AFC Wild Card game against the Houston Texans would be starting soon, and fans wanted to get ready.

“Everyone’s excited for what’s going on in Buffalo,” said Sabres winger Conor Sheary, who sported a Bills hat after scoring his second goal in three games.

If the Sabres keep performing like they did for 50 minutes Saturday, they could generate even more excitement in these parts.

They opened up a 3-0 lead early in the second period before eking out their 19th win this season.

Their special teams had been brutal, costing them games.

Their penalty killing was regularly giving up multiple goals a night. Their power play, meanwhile, began Saturday scoreless in its last 16 chances over the last six contests.

But 12:49 into Saturday’s game, Sabres defenseman Henri Jokiharju opened the scoring. In the penalty the Sabres had just killed off, goalie Linus Ullmark made a huge stop on Panthers star Jonathan Huberdeau.

Jokiharju and Sheary, who connected on center Marcus Johansson’s feed in close 1:35 into the second period, both filled some of the offensive void Saturday.

“A lot of guys are getting a little extra role with the unfortunate injuries that we have, but when you can step up and provide offense in keys roles, that’s an important thing,” Sheary said. “I think we’re getting scoring throughout our lineup right now.”

Johansson said: “Guys stepped up, we did what we had to do. It’s going to be tough without (Olofsson), he’s been one of our best players all year. But you go to fight through that and hopefully we’ll come out stronger.”

“The power play, just getting that hunger to shoot tonight, I thought that goal, also on the ensuing power play, there was a hunger to shoot that we haven’t seen for a while and we need to build on that,” Sabres coach Ralph Krueger said. “But our specialty teams were the catalyst for what happened here tonight.”

Johansson and Sheary – they played with Jimmy Vesey on Saturday – have been catalysts in the last week or so.

Sheary has struggled much of the season, even getting scratched. Johansson, meanwhile, cooled off after a fast start. The Swede said last month he hadn’t felt like himself all year.

But together they’ve formed a formidable second line.

“We feed off each other,” Sheary said. “I think he likes to play with a lot of speed, as do I. We play a lot of give-and-goes, and with (Vesey) working out there, too, I think our line just has some good chemistry right now.”

Johansson, who has a four-game point streak, said he’s “starting to feel like myself again.”

“It’s a lot of fun to be out there right now when we’re playing well,” he said. “I think we’ve played well for a bunch of games now, and now we’re starting to get results again.”

The Sabres trail the fourth-place Panthers by two points in the Atlantic Division.